Closed for Nearly a Year, One of Chicago’s Best Restaurants Returns

At the beginning of 2020, Cellar Door Provisions employed 23 people serving breakfast, lunch and dinner in the small Logan Square space. The restaurant consistently earned gushing reviews and chef Ethan Pikas was nominated for the James Beard Award for Best Chef: Great Lakes in 2019 and 2020. But Pikas and his business partner Tony Bezsylko felt overwhelmed.

“When Tony and I opened the restaurant originally, it was quite limited in its offerings,” Pikas says. “As we gained more confidence and got a little publicity, we wanted to do more. We didn’t reign that in as much as we should have. It was just becoming like this massive beast of a restaurant.”

When the pandemic repeatedly shut down restaurants across the city, Pikas decided it was time to scale things back. Cellar Door Provisions closed at the end of December 2021 in the midst of the omicron surge. Twenty months later, the restaurants will reopen for indoor dining on Wednesday, August 10 with just a four-person team, a small dinner menu, and a focus on natural wine. “The philosophy behind our food matches the philosophy behind natural wine, which is trying to tamper with things as little as possible and just letting the wine or the food speak for itself,” Pikas says.

Cellar Door Provisions is back.

Pikas reopened the restaurant’s patio in mid-July to prepare with the interiors totally redone with a new bar that runs the length of the space. There’s room for about 40 people to sit inside, with more spots for standing drinkers. Another 24 people can sit on the patio. Cellar Door Provisions had been serving natural wine for years, but bar lead Jackson Mann says the new layout provides a more casual environment and gives bartenders the freedom to open whatever bottles they want.

“We want to get people to drink wine and experience it for themselves and learn through tasting,” Mann says. “Our goal is to just have people feel really comfortable and basically just trust that anything that they’re going to have at the restaurant, whether that’s food or wine, is going to be delicious, fun, and exciting.”

The wine list will typically span about 30 to 40 bottles and shift along with Pikas menu, which rotates about every week. Food offerings are limited to about nine to 10 dishes, and Pikas said he’s enjoying having more time to refine each item. Fermentation is even more ingrained in the restaurant’s food than it was before, with Pikas making his own porridge bread, butter, miso, fish sauce and vinegar. Those techniques also play well with natural wine, which can have flavors more reminiscent of a sour beer or kombucha than a conventional varietal using the same grapes.

“It just works with our food,” Mann says. “We love the energy of it. We love the fact that the producers we’re working with doing things in this old school way that exists outside of traditional contemporary ways of going about business.

Pikas has softened the restaurant’s focus on local sourcing. While all vegetables, dairy and proteins are still coming from Midwestern farms, Cellar Door is now bringing in foreign ingredients by flying in seafood via Regalis Foods (a renowned gourmet food purveyor), seasoning dishes with lemons, and substituting Italian olive oil for Driftless Organics sunflower oil.

“I wanted to be able to do a menu that felt a little bit more complete,” Pikas says. “I love cooking seafood and it just seems to suit the wine service really well. In the end, it feels like a more well-rounded restaurant to me. Quite honestly, I still have an internal debate over it because if there was any time to be not flying seafood in from the coast, this might very well be it.”

With a much smaller staff, Pikas also has to focus on dishes that don’t involve much preparation. One emblematic example is the bluefin tuna with brown butter and blackberries from Mick Klug Farm. “It’s a very complete dish, but also has very few elements and is really satisfying in summer,” Pikas says. “The tuna is so high quality I can just season it lightly and serve it as is without any kind of manipulation.”

Most of Cellar Door Provisions’s menu is inspired by Spanish, Italian, and French dishes that incorporate just three or four main ingredients and are meant to pair well with wine. The offerings will change based on what the restaurant can get from its two main suppliers, Froggy Meadow Farm in Wisconsin and Earnest Earth in Garfield Park. 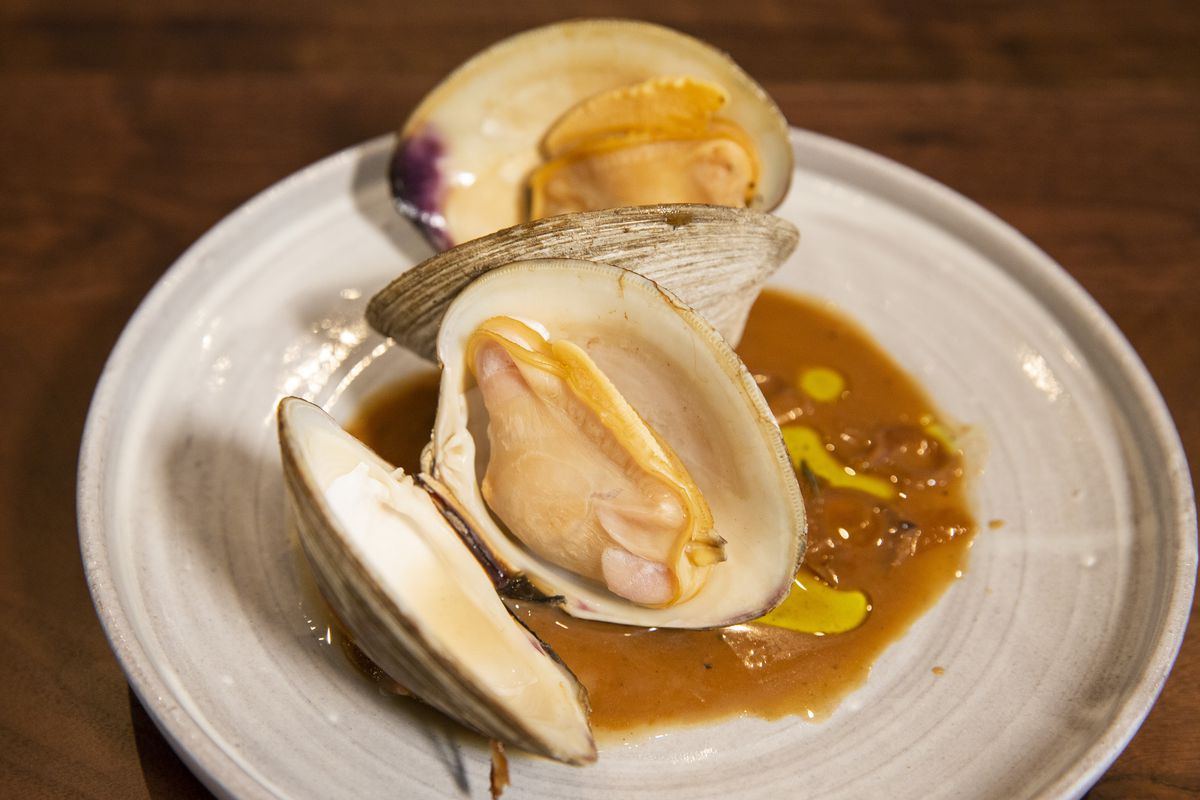 Coastal seafood is something new at the restaurant.

“Sometimes I’ll really like the dish from last week, and if they still have exactly the same stuff available, I will keep it,” Pikas says. “If they no longer do, then I either have to change that dish or come up with a new one. Because it’s just myself and one other cook cooking all the food stuff, we’ll either get really excited about something or something will start to feel a little stale to us. As soon as I feel that, I will want to get a new dish on the menu.”

Pairing down the staff and menu has helped Cellar Door Provisions weather the labor and supply shortages that have plagued the restaurant industry since the beginning of the COVID-19 pandemic.

“Food costs have skyrocketed and everyone’s charging higher delivery fees,” Pikas says. “We’re just trying to roll with the punches as much as we can.”

The James Beard nominations made Pikas reexamine what he values ​​in food, and he says he hopes he gets another shot at the award.

“I hope that eventually we can get nominated again,” he says. “I think it’s going to take some time for people to understand the shift that’s occurred at the restaurant. I personally believe that the food is the best that it’s ever been. Not to minimize what was done in the past, but I think I just have more clarity and so does everyone else working at the restaurant.”

Like it or not, the DVC championship game is one and done

The Hot Dog Box Will Pack Up at Portage Park

Who’s The Fastest Kid In Chicago? A Citywide Race Will Try To Find Out