Khalil has known that he wanted to be a police officer his whole life.

On Sunday, the Chicago Police Department and Make-A-Wish Illinois fulfilled the 4-year-old’s dream by making him an honorary officer.

Khalil, who was diagnosed at birth with sickle cell disease, spent the day making the rounds at the department, visiting the SWAT team, bomb squad, equestrian unit, canine team and even going out on the lake.

Afterward, the department held a closing ceremony, complete with bagpipers, at the CPD academy, where Khalil was presented with a special certificate and small badge. His parents and siblings looked on as he was honored by CPD officials.

Khalil’s siblings look on as he is made an honorary police officer by CPD Chief Ernest Cato on Sunday at the police academy.

“What an honor for me, to have an opportunity to see our youth, to provide a wish, to work with a great organization like Make-A-Wish and to honor Khalil,” CPD Chief Ernest Cato said. “I want to tell you I’m very proud of you,” Cato said. I’m proud of what you’ve already decided to do at such a young age.”

Officials with the Fire Department also surprised Khalil with another certificate, making him an honorary CFD member.

But Khalil’s favorite part of the day was when he got a police escort from his home, his family said.

Khalil is always on the lookout for police officers, his mom, Tasha Parker-Hall, said. He even gets upset when his family doesn’t let him know when they are nearby.

“He’s obsessed with the police,” Parker-Hall said. “So if we are riding in the car and he sees the police he goes like, ‘Police! police!’ ”

Khalil loves watching videos of police on YouTube, his mom said. And though he doesn’t watch “Paw Patrol,” the popular kids cartoon about six rescue dogs, his favorite character is Chase because he’s the cop. 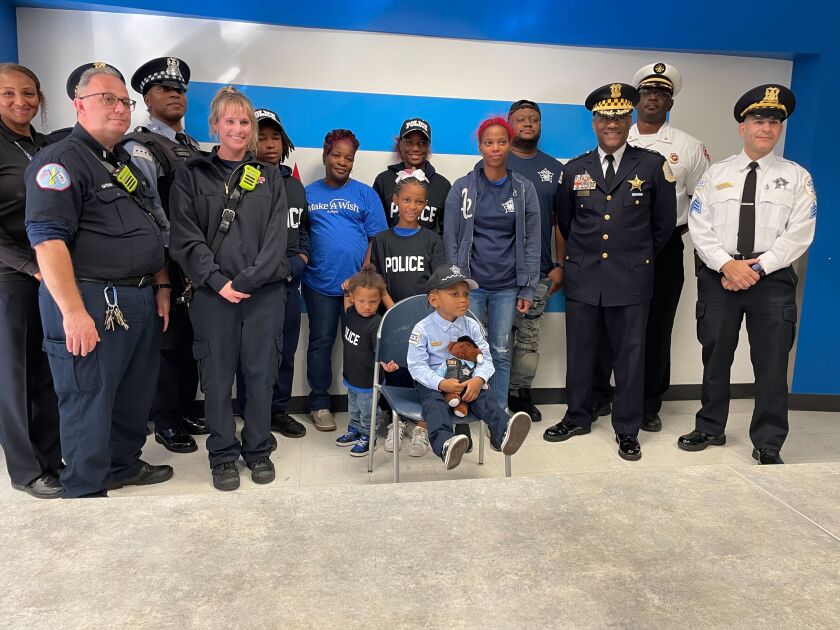 Khalil surrounded by family and CPD officials. His mom says he’s always on the lookout for police officers.

Parker-Hall said she feels “blessed” that her son got to have the opportunity to become an officer, even for a day.

The type of sickle cell Khalil was diagnosed with means he is at a higher risk for a stroke, his mom said, so he had to have brain scans every month. Now he has to get monthly blood transfusions to help minimize the risk, Parker-Hall said.

“He’s really strong. He motivates me, “his mom said.

The Hot Dog Box Will Pack Up at Portage Park

Who’s The Fastest Kid In Chicago? A Citywide Race Will Try To Find Out