Elections, especially primaries, are always a mix if good and bad results. In Orland Park, the extremist Republicans managed to survive thanks to one of the lowest voter turnouts we have seen in a long time. In the 6th District, Orland Park’s extremist rightwing Mayor Keith Pekau wants to face-off with moderate Centrist Congressman Sean Casten. The extremist Republican’s “victory” in Orland portends the GOP’s collapse. Controversy plagued Sean Morrison faces a strong Democratic challenge in the 17th Cook County District, a seat he barely managed to hold four years ago. Moderate Republicans have been erased and the party is left to the nut jobs.

I have covered elections long enough to know that anything is possible, including seeing the bad guys defeat the good guys.

The toughest challenge is getting voters to vote. Turnout is always low.

For those voters who do vote, it still all comes down to one principle: you can’t force voters to do the right thing.

Liz Gorman, who is clearly the candidate who could do the most for the 17th District, lost to the self-serving incumbent, Sean Morrison. 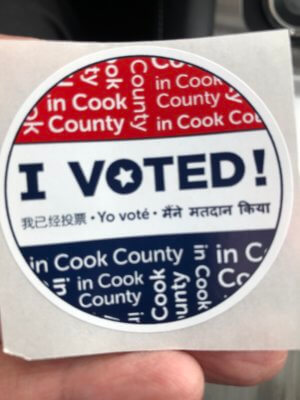 Vote sticker from he 2020 election in Illinois

Maybe you think I’ve been tough on Morrison. But I’m not. I gave him a chance and I supported him in 2018. During the past four years, though, he has been a leadership disappointment.

He is more concerned about preserving his job than he is fighting for the taxpayers.

That’s why he sent a letter urging a judge to give his company’s top employee, Anthony Martin, a break, when he was arrested for sexually harassing a 14-year-old girl. Had Morrison instead urged that he be jailed, and Martin had gone to jail, Martin might not have gone on to sexually harass another 14-year-old, who turned out to be an undercover Colorado Police Investigator while he was on Morrison Security business, days after Morrison wrote his letter to the judge.

In another instance of privilege, records were released showing Morrison got special treatment from the Palos Park Police Department, whose budget is more than half of the village budget. Police visited his home for formal security checks an average of 60 times a year during the past seven years, a huge taxpayer expense.

But obviously, many voters didn’t care about any of that in the 17th County District. They care more about extremist vitriol than protecting their home values, reducing taxes or bringing down rising economic costs.

Morrison is part of the Keith Pekau political cult which is built around an egotistical personality. Pekau hasn’t done much since becoming mayor, though he says he has. He’s challenging moderate centrist Congressman Sean Casten in the Nov. 8, 2022 election in the new 6th District.

Pekau cut tax rates before the last village election only to raise them after. He claims there is no crime in Orland Park, when public fears of crime are at their highest. Question him, and he falsely accuses you of attacking the police.

Police don’t want to be dragged into politics. They just want to do their jobs and make sure that the officials and the public have their backs.

The priority is to defend the police not defund them. It’s most important that criminals arrest them are not released. Pekau has hidden behind that tragedy of Cook County State’s Attorney Kim Foxx releasing criminals instead of prosecuting them, but that doesn’t make him a good official.

Liz Gorman spent her life fighting for the rights of taxpayers when she was on the Cook County Board. She didn’t just play politics like Morrison or Pekau do.

The best example was when the Democrats, who are the overwhelming majority on the county board, raised the sales tax. Gorman voted against it. But she didn’t stop there and stamp her feet in anger, like Morrison does. She convinced the Democrats to change their votes and, with her leadership, got them to repeal the tax.

Morrison claims he stopped the Soda Pop tax but that is an outright lie. He had absolutely no influence. He was just an extra vote who rode the coattails of the Democrats who he bashes and who voted to block the sales tax. They didn’t need him. He went along for the selfish ride.

Morrison is all about politics and self-preservation. Gorman is about serving the taxpayers.

The 17th District has one more chance to put someone in who cares about the taxpayers and remove Morrison, a blight on our county. You can elect Dan Calandriello to the Cook County Board in the November 8 General elections.

It’s a simple choice. You can drink the Pekau cool aid, or you can wake up and do what’s right for yourselves and your pocketbooks.

I have known Calandriello since he was in elementary school. When he asked me about politics, I helped push him into it and introduced him to the village mayor at the time. I regret it, sometimes, because politics is dirty and filled with lies.

But every once-in-a-while, you hope for someone to come through the system who is pure at heart and courageous to do the right thing for the public, not for themselves.

Dan Calandriello is that person.

Of course, all this is meaningless if you care more about a cult than you do about your own interests, safety and property taxes.

(This column was originally published in the Southwest News Newspaper Group July 6, 2022 including in The Regional, Des Plaines Valley News and Southwest News-Herald.)

(Ray Hanania is an award winning former Chicago City Hall reporter. A political analyst and CEO of Urban Strategies Group, Hanania’s opinion columns on mainstream issues are published in the Southwest News Newspaper Group in the Des Plaines Valley News, Southwest News-Herald, The Regional News, The Reporter Newspapers. His Middle East columns are published in the Arab News. For more information on Ray Hanania visit www.Hanania.com or email him at [email protected]) 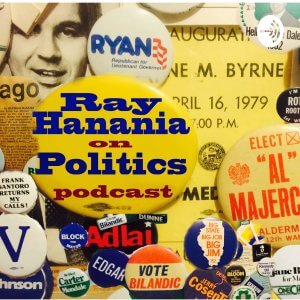 Cubs molding identity on the base paths: ‘They’re hungry’