Kelly told residents at a 1st Ward meeting Thursday night that she’s met with representatives of the American Legion Evanston Post 42 about the issue and that a committee has been formed to discuss the idea.

She said the veterans are seeking to create “a better space for reflection, reverence and acknowledgment” of the military personnel who lost their lives in the nation’s wars. 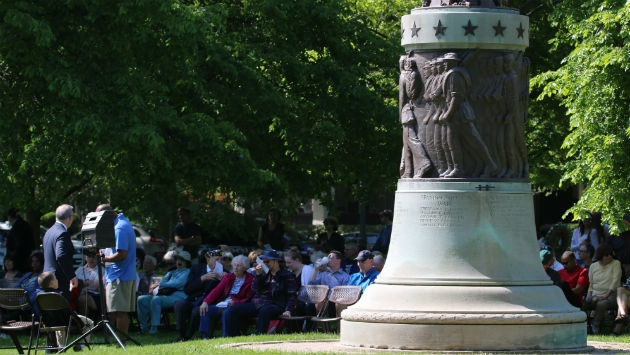 A Memorial Day ceremony at Patriots Park in 2017.

Kelly said one site under consideration is Patriots Park on the Evanston lakefront at Davis Street.

The park already has a flag pole with a base that memorializes Evanstonians who lost their lives in conflicts from the Civil War through World War I.

It was supplanted by Fountain Square as the location for the city’s primary memorial to veterans after World War II.

That memorial was dedicated in 1951 during a visit to Evanston by Gen. Douglas MacArthur, which was covered by local radio station WNMP.

Fountain Square has been redesigned twice since then, and, during the construction of the current fountain, ceremonies, including the 2017 and 2018 Memorial Day programs, returned to Patriots Park.

The continuing problems with getting the new fountain in the square to work properly may be a factor in the discussion about finding a new location for the memorial.

Weatherspoon resigns from D65 board