As a teenager, Charles Jefferson Jr. was invited to join the Usher Board at his church. It was a personal turning point.

Being invited onto that team helped him mature in his faith. And greeting people as they arrived at Chicago’s New Mt. Moriah Missionary Baptist Church taught him the importance of first impressions.

Now he’s in charge of something similar — media first impressions — and much, much more for the entire United Church of Christ.

Jefferson began work Aug. 1 as director of marketing and communications. He’ll lead that work in the Office of Philanthropy, Technology, Identity and Communications, part of the UCC’s Office of the General Minister and President. He’ll oversee the web, social media, news and video work of the national ministries — and help formulate the strategies behind that work.

Among the things he’s looking forward to: boldly and publicly sharing the UCC’s faith-in-action values, and listening to the TikTok generation.

Until moving to Cleveland this month to take his new job, Jefferson was a lifelong Chicagolander. He is a 2010 graduate of Evanston (Ill.) Township High School and a 2014 journalism graduate of Columbia College of Chicago.

And though still a Baptist, he learned all about the denomination’s Open and Affirming, “just world for all” vision and values ​​during nearly three years as communications and marketing coordinator for UCC-related Chicago Theological Seminary (2017-2019). He has also directed communications for Evanston’s Moran Center for Youth Advocacy (2019-2020) and Chicago’s Holy Trinity High School (2020-2022).

At CTS, he especially appreciated the seminary’s willingness — long before he got there — to embrace bold, forward-thinking campaigns. Among them were “Leaders for the Next” and messages like, “If you don’t think racism exists, you’re white.” The latter included social media memes and a widely viewed “White Privilege Glasses” video spot.

That kind of boldness — in mission, and in communicating about it — is on Jefferson’s mind, he said, as he begins to immerse himself in the UCC’s national setting. 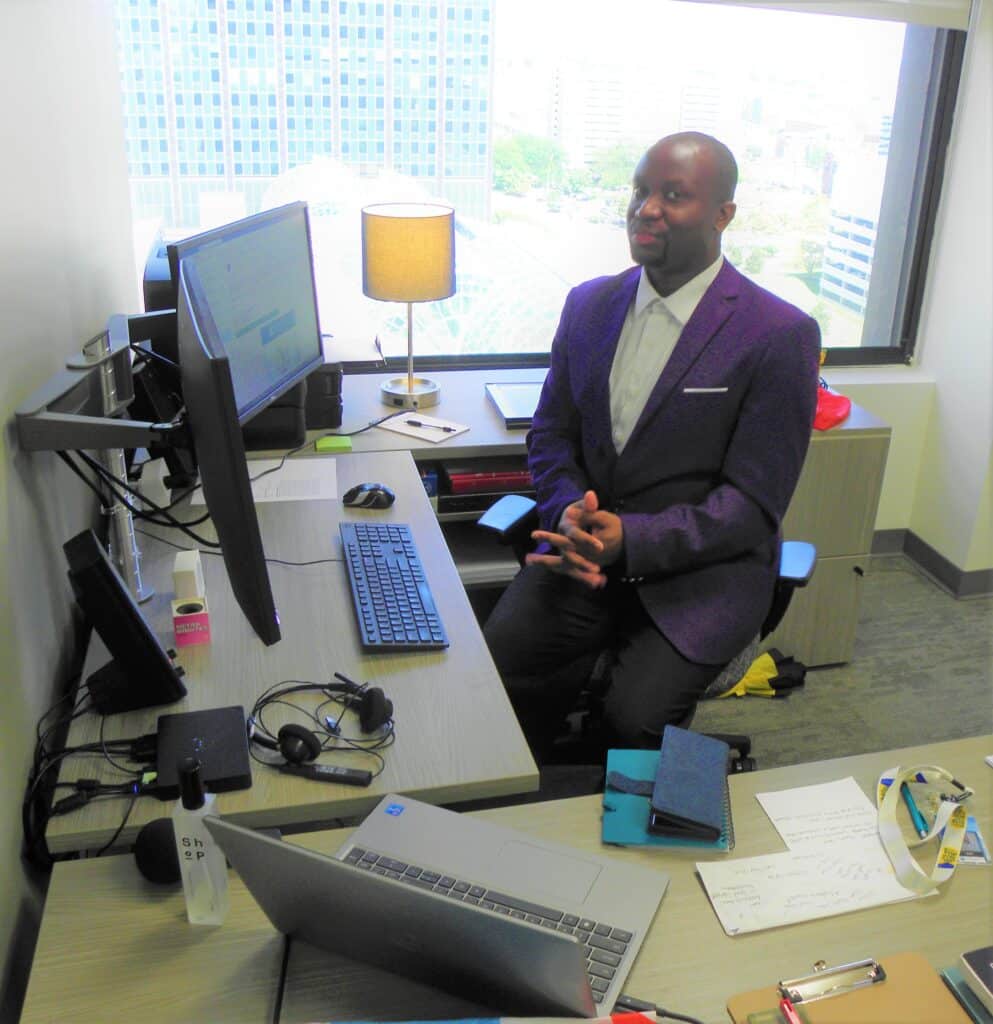 Director of Marketing and Communications Charles Jefferson Jr. settles in at the UCC’s Cleveland offices on Aug. 2, 2022.

One form of boldness he’d like to see is to “go beyond preaching to the choir” and find ways to engage “even with people who disagree with us.” He said he’d like to see UCC messages function as conversation starters toward deeper understanding among people with differing viewpoints.

As an example, that might mean carefully preparing to do something counterintuitive: occasionally reaching out to — or placing leaders in interview with — media outlets that aren’t sympathetic to UCC viewpoints. Hearing a UCC spokesperson might not change an entire audience’s mind, he said. But “it might reach some people and offer them a different way to look at an issue.” And it would demonstrate that “we can do that — we can have these tough conversations.”

“I don’t think we’ve gotten to that point by saying, ‘No, that’s going to ruffle too many feathers.'”

Charles Jefferson Jr., on the UCC’s reputation as a faith-based leader in matters of social justice

“If we’re not going to be bold and take that chance, that kind of defeats the purpose of the UCC,” Jefferson said. And that, he said, is why starting conversations doesn’t mean sacrificing deeply held values. Faithful boldness, he said, is what the UCC has earned a well-deserved reputation as a progressive, justice-oriented leader. “I don’t think we’ve gotten to that point by saying, ‘No, that’s going to ruffle too many feathers.'”

He said it’s important for the UCC to keep speaking out about its faith and values ​​and how they’re lived out when it comes to “social justice, racial justice, police brutality, gay marriage, abortion, climate change” and many other contemporary issues .

Jefferson said he is keenly aware, as he steps into his new position, of how much the world of communication is changing. “COVID has changed things permanently in every aspect of life,” he said, ranging from remote work to online church.

When the pandemic hit, he saw that firsthand at Mt. Moriah, where he’s still a member. “I was kind of volun-told to jump-start our media program,” and that meant starting from scratch. The church had almost no online presence. Now it needed to stream worship services. Jefferson set up a website, opened social media accounts for the congregation and pulled together a simple streaming system, operated from tablets.

And then came the task of teaching Mt. Moriah’s elderly members how to be included. He visited them in their homes, set them up with Facebook and YouTube accounts and showed them how to go to church online. “Now some of them who aren’t comfortable coming back to worship in person are still attending online,” he said.

‘This is the TikTok era’

Partly because the online world is here to stay — along with constant adjustment to rapid change — Jefferson said he wants to involve young people in the UCC’s communication work.

To be sure, this means engaging younger audiences through platforms like TikTok. More than that, he said, it means listening to “Gen Z-ers and the generation after them.”

“They have been instrumental in changing work culture, political culture, religious culture,” he said. “This is the TikTok era. They are the trendsetters. They are changing the game. They are going to be essential.”

“They are the trendsetters. They are changing the game. They are going to be essential.”

From his own early days at Mt. Moriah, Jefferson said he knows how fertile the teen and young-adult years can be. When he was a child, “my grandmother made us go to church every Sunday,” he said. “Like most people, it wasn’t until I became older — 14 or 15 — that I started to develop my own relationship with Christ.”

And that was when, as a young usher, he learned something else that might inform his communication work for the denomination: “The first face that visitors see when they come into church can make or break their experience.”

Content on ucc.org is copyrighted by the National Setting of the United Church of Christ and may be only shared according to the guidelines outlined here.

Saved by an AED and a quick-thinking coach