Students find humanity in the pandemic

“Okay class, raise your hands if the COVID-19 pandemic has been fun.”

“Now, raise your hands if the pandemic helped you learn more about yourself and the world around you.”

Those are not quotes from the upcoming student-written performance, “I’m Smiling Beneath This Mask.”

But they do help sum up what the show, put on by the Evanston-based Mudlark Theater Company, is about.

A dozen local kids, from elementary school through high school, are on stage reciting poetry, putting on skits, telling narratives with a music background … all written by the youngsters themselves, all explaining that despite the challenges and the pain of COVID, it was still possible to smile beneath the mask.

“I feel like it changed me, because I was able to learn about perseverance,” says 14-year-old Jackson Stroth, about the pandemic.

Jackson, an 8th grader at Haven Middle School and a member of the cast, says “this show is personal,” because unlike in most plays, where you portray someone else, in this production you are portraying yourself. 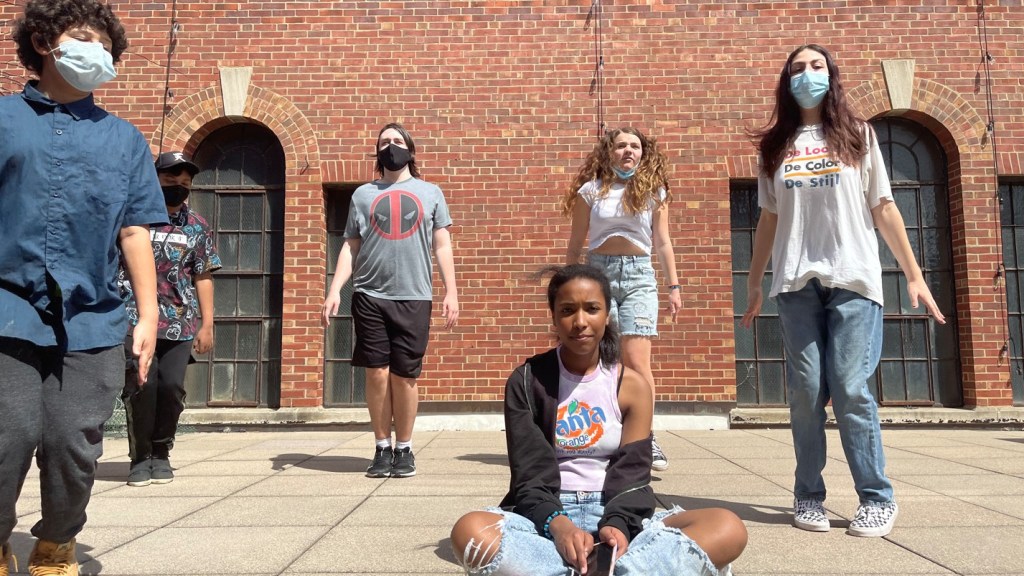 “6th grade was very stressful for me,” Jackson says. But the pandemic, with remote learning and a lot of alone time, “helped me slow things down and get ready for middle school. I learned to be better” around others, Jackson adds.

Mudlark is a theatrical organization for young actors.

“We are presenting what kids do as art, as opposed to ‘art in training,’ ” he explains.

Mudlark is putting on five different shows this year, all revolving around how “people need a connection,” Billiter says.

And nowhere is that need for connection more obvious than after so much time behind a mask.

“People are desperate to have human contact,” Billiter says, an emotion which comes through in “I’m Smiling.”

The director of this show is poet and “spoken word musician” Khari B, otherwise known as the Disco Poet, from Chicago.

“Young people have experienced the pandemic in so many ways,” he says.

“We want to capture these stories,” he says, “and make them as authentic as possible.”

Khari says each performer was asked to write about what they hated in the pandemic, what they liked, how they grew, and then, anything else they wanted to add.

“We spent two years without knowing what people looked like,” he says. “We only saw the tops of their faces. We don’t know what was going on under the mask.”

Sometimes what was going on was funny. Other times it was serious.

“This is to show there were positives” under the mask, he adds.

Part of Jackson’s performance is about “when my parents got COVID and I had to navigate it.”

It happened during Chrismas break, and included a quarantine.

“Over Christmas,” Jackson says, “my parents had to be in a separate room and watch us open presents” through a doorway. “We wore shields and masks.”

It was, to say the least, a learning experience.

In fact, a poem she wrote is the closing segment of the show.

Amelie says she tried to make her works “funny, meaningful, and relatable, so a connection can be felt with the audience.”

Her closing poem, she says, is about a show.

“People are waiting, and start to get bored,” she explains.

But then, “all these new things happen,” like COVID-19. And you “meet new people.”

Even though the imaginary show in her poem never begins, the make-believe audience “still had positives.”

And so it was “BeneathThis Mask” for these creative youngsters.

And because they will be outdoors, you won’t even need to wear a mask. So you’ll be able to see everyone smile as they watch the talented children on stage.