When Democrats redrew the state’s Supreme Court districts last year for the first time in 58 years, they hoped the new map would maintain their party’s majority on the court.

A longtime Democratic justice had just lost his seat, and state legislators from his party knew that maintaining their 4-3 dominance of the state’s top court would require the party to win just one of the four districts outside of Cook County, which has already sent three reliably democratic justices to the court.

But the retirement of a Republican justice created a rare open seat race in the northwest suburban 2nd District. And that could tilt the Democratic leaning 4-3 court into Republican hands — if the race in the 3rd District, where Democratic Justice Thomas Kilbride lost his bid for retention two years ago, also goes Republican.

The 3rd District does not have a contested primary.

That is far from the case in the 2nd District, where four Republicans and three Democrats are vying for the seat previously held for two decades by retired Justice (and former Chicago Bear) Bob Thomas. That district now covers a large part of northeastern Illinois, including DeKalb, Kendall, Kane, Lake and McHenry counties.

Further confusing matters, Republican Michael J. Burke, who was appointed to replace Thomas in 2020, is running in the newly redrawn 3rd District. Burke and Democrat Mary K. O’Brien will face off in the 3rd District for the seat previously held by Kilbride, who lost his bid for retention two years ago after Republicans who portrayed him as former House Speaker Mike “Madigan’s favorite judge” in attack ads.

The newly redrawn 2nd District race has taken on increased meaning as the US Supreme Court is poised to strike down the Roe v. Wade decision protecting abortion rights. None of the candidates would say how they would vote regarding related issues, but the Democrats in the race have all signaled their past support for abortion rights, and all but one of the Republicans has expressed opposition to abortion.

Republican candidate Daniel Shanes, a Lake County Circuit Court judge for 16 years, said he didn’t set out to be a Supreme Court judge, but “looking back, everything I’ve done has prepared me to do so.”

Shanes says he has the deepest judicial experience, attaining the title deputy chief judge after climbing the ranks from assistant state’s attorney in 1995. The Illinois State Bar Association rated him “highly recommended.” He was the only Republican to give no indication of his position on abortion.

RepublicanSusan Hutchinson, Illinois Appellate Court Judge and ranked “highly rated” by the state bar association, claims to have the most judicial experience with 41 years on the bench.

She’s interested in keeping children out of divorce proceedings—something she implemented in McHenry County after experiencing her parents’ divorce hearings at age 9.

At age 72, she said she has ideas that she could bring to the court, which implements administrative rules across the state, including reshaping other judicial districts so people in Rockford don’t have to travel for arguments in Springfield. 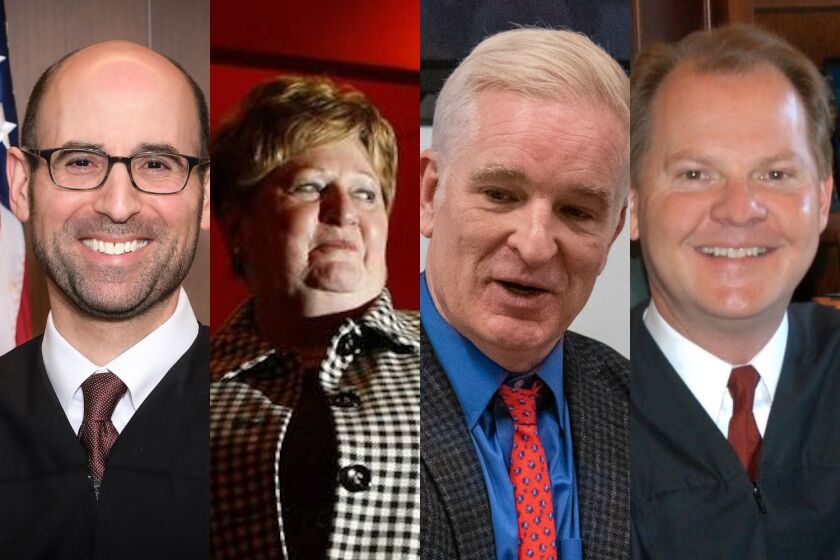 Republican John Noverini, a Kane County Circuit Court judge, says he’s a “non-establishment grassroots conservative” with well-rounded experience that includes decades as a business attorney. Elected a trial judge in 2008 and retained twice, he says he has “a genuine record of public service.”

Noverini said he declined to be interviewed by the state bar organization because of its “woke questions” and “clear conflict of interest” since the Supreme Court regulates attorneys. He was rated “not recommended.” Noverini brands himself an “originalist” who interprets the Constitution as it was meant to be understood by the founding fathers.

Republican Mark Curran, a former Lake County sheriff who ran for the US Senate, said he’s running for the court seat because he feels “like liberty is eroding,” and he is concerned most of the Republican primary energy has been behind Shanes. Curran was an assistant state’s attorney in the 1990s, then was elected as a Lake County sheriff as a Democrat.

Curran has never been a judge, but said he makes up for that with experience teaching constitutional law and as a prosecutor. He has a “hard time identifying as a Democrat or Republican. I’m led by faith in terms of my world view.” He’s “not recommended” by the state bar association.

Democrat Elizabeth Rochford, a Lake County judge, says she has been “walking steadily to this job over the last 30 years.”

Starting as a Cook County assistant state’s attorney, she moved to private practice, then spent 23 years as commissioner of the Illinois Court of Claims and a judge for the past nine. She served on advisory committees to the Illinois Supreme Court that help and better guidance training to the court system.

Rochford is rated “highly recommended” by the Bar Association. She said experience has taught her that the broad mandates from the state supreme court need to consider the variety of court systems across the state. “Lake County has lots of resources, but others don’t have that. You have to be willing to make modifications to reach the same goal,” she said. 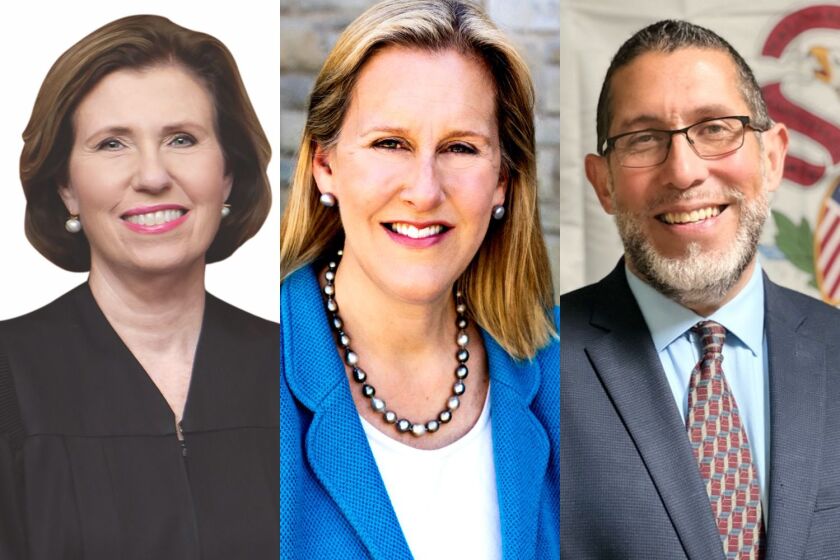 Democrat Nancy Rotering has no experience as a judge but said she makes up for that as Highland Park’s mayor — what she called a “quasi-judicial role” — which has given her 12 years experience working with police. She also “knows what it takes” after her experience of defending the city’s assault weapons ban against the National Rifle Association.”I think it translates well,” she said.

Rotering wasn’t phased by the Bar Association’s “not recommended” rating. “I’ve been in the public service sector for decades so I’m no connected to these lawyers,” she said.

Democrat Rene Cruz, a Kane County judge, would be the first Hispanic judge on the state’s highest court if elected. As a circuit court judge, Cruz helped usher diversity into the ranks of Kane County, where there are now five judges of color. That diversity “translated to other offices” and can be seen even in the racial makeup of bailiffs, he said. Cruz is recommended by the Bar Association.

Cruz said he has administrative experience the others lack. He oversaw the transition to virtual court proceedings during COVID, and recalled using the time-limited trial version of Zoom until the county bought the proper licenses. “No one had a plan but I was able to double down our effort,” he said. Cruz also moved Kane County to use nearly all in-house interpreters, which has saved the court money and improved the quality of translations, he said.

The primary races are on June 28.