A fast casual eatery called Sweetgreen is now open for business, part of a major revitalization of a very visible building in downtown Evanston.

The salad-and-grain-bowl restaurant is on the first floor of the 1948-vintage Fountain Square Building, which is undergoing a complete makeover, top to bottom and inside and out.

The rest of the six-story structure is for offices, with more than half already leased. The office floors are expected to open later this year. 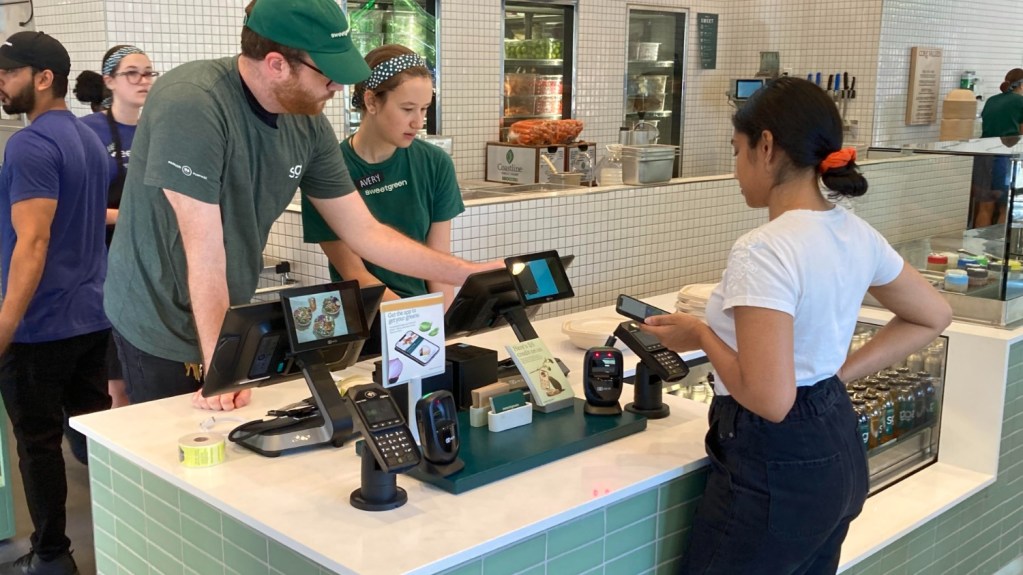 Customer on Day One at Sweetgreen downtown.

The company was founded by three college graduates in Washington, DC in 2007, and has taken off over the years.

Co-founder Jonathan Neman was once quoted by INC magazine as saying, “We want to be the Nike or the Apple or the Spotify of food.”

Evanston may just want Sweetgreen to be a good place for a quick lunch, and to anchor the first floor of a building that has been somewhat less than beautiful in recent years.

The city’s economic development manager, Paul Zalmezak, who was on hand for the ribbon cutting Tuesday, said the structure was “in a stagnant state,” and the new owners, Shapack Partners along with Reimagined Ventures, “were able to really invest a lot into renovation.”

The previous owner had listed the building for sale at $7 million.

The revitalization is adding large windows, a new, modern floor plan and other features including relocating the elevator core.

New windows are still being installed on upper floors.

“To move an elevator is a monumental task,” Zalmezak added.

While the rehabbed building will add offices to a business core with lots of vacancies, Zalmezak said “this additional space will not change the marketplace significantly.”

Zalmezak said the Fountain Square Building is a “boutique offering” for small tenants, and is not aimed at large corporations.

The front door for office tenants is being moved from 1601 Sherman to other side of the building on Orrington. The structure is even being renamed 1616 Orrington, as part of the makeover.

Renderings of planned renovations to the Fountain Square Building showing the Orrington and Sherman avenue facades..

Downtown Evanston is recovering slowly from the COVID-19 pandemic, with many employees still working from home.

“Things are static,” Zalmezak explained. “Office workers have still not come back” in large numbers.

Zalmezak said downtown has two million square feet of office space, and the so-far-unleased portion of the Fountain Square structure is only about 14,000.

The Fountain Square Building, by the way, began as a Rothschild Department Store, then was turned into offices and retail, including World of Beer.

Now, you could say it’s World of Salad.