A predictive map of Cook County in 2030, far right, shows how the racial composition of neighborhoods will change compared to maps using US Census data from 2010 and 2020. Credit: Tomasz Stepinski/UC

A map created by researchers at the University of Cincinnati can predict with surprising accuracy how the racial makeup of neighborhoods will change.

UC College of Arts and Sciences geography professor Tomasz Stepinski created a machine-learning algorithm to predict in fine detail how neighborhoods will become more or less segregated in the next 10 years.

Stepinski, who works in UC’s Space Research Institute for Discovery and Exploration, analyzed data collected by the US Census Bureau every decade. They mapped the data by racial composition in the high resolution of 300-meter squares called cells.

The algorithm had to be “trained” to interpret the data from two census years spaced 10 years apart. The algorithm also examined individual cells in relation to those around them.

Stepinski validated his algorithm by comparing its predictions to actual data from the 2010 and 2020 censuses and found it was up to 86% accurate.

“Our hypothesis that you can predict the class of a cell in 10 years based on the previous two classes and surrounding classes was correct,” he said. “It’s not perfect, but you can see it’s pretty good.”

Stepinski and co-author Anna Dmowska, an assistant professor in the Department of Geoinformation at Adam Mickiewicz University in Poland, applied their algorithm to Chicago’s Cook County, Illinois, at one time considered one of the most racially segregated places in America.

Stepinski said researchers in Chicago have conducted pioneering sociological research on race, ethnicity and gentrification using Cook County as their model. The sprawling, heavily populated county also provides a good model to study the algorithm because it still has many segregated neighborhoods despite trending toward greater racial and ethnic diversity over the last 50 years, he said.

Stepinski also applied the algorithm to Houston, Texas, and Los Angeles and San Francisco in California with similar success.

“The ability to predict demographic changes is essential from a scientific point of view and for policymakers, city development, etc.,” co-author Dmowska said.

“As shown in the paper, the predictive maps are pretty accurate and show how the area might look in the next 10 years,” she said. 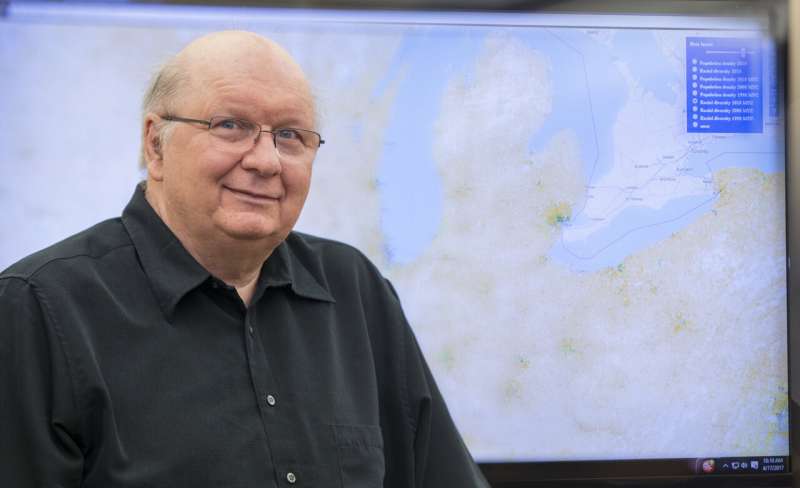 University of Cincinnati geography professor Tomasz Stepinski developed an algorithm that can predict with 86% accuracy how the racial composition of neighborhoods will change over the next 10 years. Credit: Joseph Fuqua II/UC

Stepinski said the predictive maps could be used to help schools or governments plan for more services such as Spanish-speaking classrooms or interpreters. It also could help sociologists understand the driving forces behind the changing demographics of neighborhoods.

“My interest is not sociological. My specialty is computation,” Stepinski said. “I leave the why to someone else. But I can imagine what’s happening.”

Stepinski said younger generations are often likely to remain in nearby neighborhoods if they remain in an area at all. And if one particular racial population declines in an area, others typically fill the void.

“It’s diffusion,” Stepinski said. “So in Cook County you have a Hispanic population that is growing faster than the white population. They’re going to move close by. They’re not going to move far from home.”

Michael Chavarria, executive director of the nonprofit HOPE Fair Housing Center in Illinois, said he was surprised by the map’s predictive accuracy.

“One incredibly powerful thing it does is affirm the narrative that people don’t have as much control over where they live as decision makers think they do,” he said.

“People think segregation is the result of individual choices. And some people might choose to live in places where everyone looks like them,” Chavarria said. “But the idea that an algorithm can predict where people live shows there are other factors that control these decisions. That tells me that the choice about where we live isn’t rooted in full agency.”

In Cook County’s case, Chavarria said the snapshot view the predictive map affords might suggest that some neighborhoods in Cook County are becoming less segregated. But it might also merely capture the transition from one type of segregated neighborhood to another just as segregated.

“Seeing these neighborhoods change could just be a precursor to more segregation,” Chavarria said.

Olivia Cobbins, an investigator with the Cook County Human Rights Commission, said it’s important to examine racial segregation in the context of issues such as housing discrimination or public services.

“Chicago has a history of racial discrimination, redlining and inequalities towards African Americans,” she said.

Cobbins said policies and laws must keep up with changing demographics to ensure equal opportunities for everyone.

“Public officials and society have a moral responsibility and obligation to provide justice, equality and equity and to ensure public assistance and decent, affordable housing is available to those in need.”

New map shows racial diversity of every neighborhood in continental US

This document is subject to copyright. Apart from any fair dealing for the purpose of private study or research, no part may be reproduced without the written permission. The content is provided for information purposes only.