Lonnie Dunlap could have sat at home and filled out her 2022 Illinois primary ballot while, say, eating lunch or watching TV.

Or, she could have waited until June 28 and cast her vote in person.

But on Wednesday, Dunlap went to the Morton Civic Center, the only early, in-person voting site in Evanston, and performed what she considers her civic duty.

“I like to vote in person,” said Dunlap, who happens to be a member of the League of Women Voters.

“It’s fun to be part of the voting process with other people.”

But in the world of COVID-19, not too many other people. Dunlap said it’s easier to vote in person before Election Day, because there are “fewer crowds.”

The ongoing pandemic, and the related desire to stay away from large groups, may be one reason that far more Evanston voters are applying for mail-in ballots this year than in the 2018, pre-COVID gubernatorial primary.

According to the Cook County Clerk’s Office, 4,366 Evanstonians have requested mail-in ballots for the current primary so far. Four years ago, it was only 1,446.

Besides COVID, another reason for the drop-off in in-person voting may be, according to County Clerk’s office, the change in primary election date, from March in 2018 to June in 2022. School is out, the 4th of July is almost Here, and lots of people may be out of town and unable to vote early in person.

Still, some campaigns still have volunteers outside the Civic Center, making last minute pitches to those voters who are on the way in.

Lina Taylor, whose husband Sanjay is running for 9th Subcircuit Court Judge, was handing out literature.

With more than 40 names spread out over multiple judicial races on the Democratic ballot alone, Tailor said it “can be overwhelming” to voters, so it’s a plus to meet a candidate’s friend or relative. 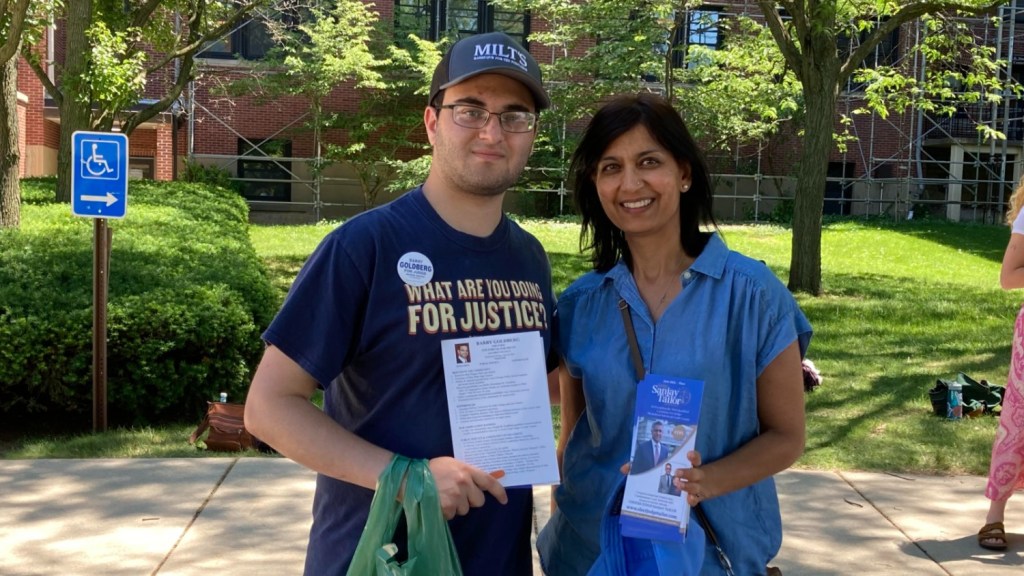 Gabriel Goldberg (L) is campaigning for his father, Lina Tailor for her husband.

Gabriel Goldberg, whose father Barry is running for a different 9th Subcircuit seat, agreed that the ability to “personalize” the candidate can help separate a winning contender from a loser.

Don Sampen is one of those running against Goldberg. Veronica Khachatryan was passing out Sampen leaflets. She said “people are doing their own research” to separate one judicial candidate from another, and “voter outreach” is critical.

While both the Democratic and Republican parties have primaries, in deep blue Cook County and even deeper blue Evanston, winning the Democratic primary means winning the election, because in many judicial races, the GOP is not fielding any candidates.

Proof of Democratic dominance in Evanston can be seen by the number of mail-in ballots requested. So far 4,071 voters have asked for Democratic ballots. Only 282 Evanston voters have requested one for the Republican primary.

So, one of the most prized documents among Evanston voters is the Democratic Party sample ballot, which many people take right into the polling place with them.

Two former politicians, if you can call student government leaders politicians, were also handing out leaflets today, for Democratic candidates who were not endorsed by the Evanston party organization.

Maeve Newton and Eloise O’Bryan were once President and Vice-President of their class at Regina Domincan High School in Wilmette.

The two former student government officials were leafletting for judicial candidates Beth Ryan and incumbent Judge Raymond Mitchell, both of whom are running in separate races.

“There is another choice” than those with party endorsements, Newton said, with more qualifications, in her opinion.

Of course, there are races besides judges which are getting most of the public attention, such as who the Republicans will choose as their gubernatorial candidate, or the Democratic pick for secretary of state, or county assessor or county board president.

Early, in-person voting ends June 27. The primary is June 28. Mail-in ballots can also be postmarked as of that date.

You can find more information on primary election voting locations and other voting-related questions on the county clerk’s website.

DeEtta’s Bakery a family business, right down to the recipes and the business’ name – Chicago Tribune