Maybe they should change the sign from “Expect Delays” to “Expect More Delays.”

The City of Evanston says a strike against several suppliers of aggregates, a key component of both asphalt and concrete, has already stopped or delayed some capital improvement projects, with future delays possible for others.

“Local aggregate suppliers have informed the City of Evanston that their supplies are depleted,” according to a city news release.

Most work has already halted on the Central Street Bridge replacement, and street resurfacing on several roadways, such as Florence Avenue, Greenleaf Street, and Madison Street, is being delayed. 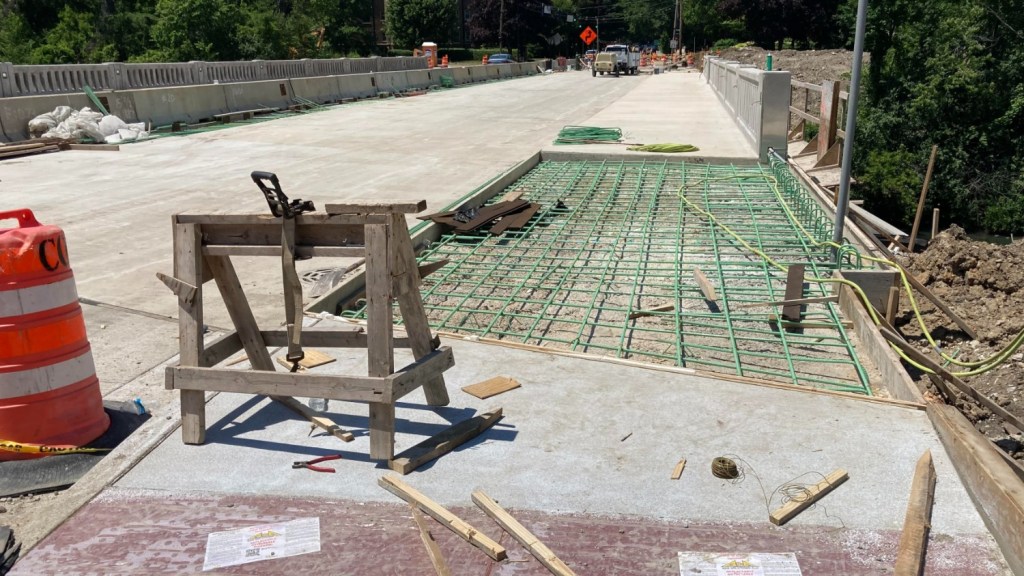 Most work has stopped on Central Street Bridge project.

City Engineer Lara Biggs tells Evanston Now, “Unfortunately, delays have become so common that it’s not worth getting frustrated.”

Instead, Biggs says, the city tries to “manage the impact” for residents.

For example, says, “The entire 2022 street resurfacing contract has been delayed from starting so that these streets are not left half complete” while the contractor waits for asphalt.

Work is continuing on two main water projects, but the city says future delays are possible if the strike and related materials shortages drags on.

Biggs says the walkout, by Local 150 of the International Union of Operating Engineers, “seems to be continuing with no progress for resolution being reported.”

However, Biggs adds if there is a settlement, it usually comes with no advance public notice.

Depending on the length of delays, Biggs says some work may have to be pushed into next spring, “but it is better for our community to not tear up the street indefinitely.”

Biggs says in some cases where aggregates are needed for water main projects, “streets have been restored with gravel … so that they are fully open, even if it is not ideal.”

Currently, she says, $17.5 million worth of city projects are seeing delays. The longer the delay, the more likely it is that costs will go up and be passed along to the city.

“A shutdown from a labor strike is the type of event where contractors are not held liable for the cost increases.”

The strike is not just impacting Evanston. The city says the strike has shut down quarries in the entire Chicago area.

And “the longer the strike goes on,” Biggs notes, “the more likely it will affect other contracts” for city construction projects.

So the end of the walkout is somewhere down the road. Just don’t expect the road to be paved until the strike is over.

The city has more detail about the impacted projects available online.