The planes are F/A-18 Super Hornets, the type used by the US Navy in combat.

This weekend, the fighter jets, flown by the Navy’s Blue Angels, will be among the aircraft in the sky for the annual Chicago Air and Water Show.

The free two-day event features performances from both military aircraft and civilian planes.

“We’re super excited to be here in Chicago and to represent the men and women of the Navy and the United States Marine Corps,” said Maj. William Huckeba, with the Blue Angels and US Marine Corps.

Maj. William Huckeba, with the US Marine Corps, is one of the pilots of the Blue Angels C130J cargo plane — which is nicknamed “Fat Albert” — at Gary International Airport in Indiana on Thursday ahead of the Chicago Air and Water Show this weekend .

Huckeba flies the Blue Angels’ C-130J Super Hercules, a massive cargo plane also called “Fat Albert.” The aircraft was added to the Blue Angels in 1970 and gained its nickname after kids pointed at the plane and compared it to the cartoon character.

Aside from the Blue Angels, Air Force planes will also be at the show, including F-22 Raptors and F-35 fighter jets.

Maj. Joshua Gunderson, who flies one of the F-22s, can’t remember a time in his life when he didn’t want to fly fighter jets. He grew up going to air shows in Tampa.

“One of the best parts of this job is going out to communities, talking with kids and being an inspiration to them and showing them their dreams are attainable,” Gunderson said.

Unlike the Blue Angels’ planes, the F-22s used in the air show are all combat-ready jets, minus the bombs and missiles, Gunderson said. The fighter jets can reach mach 2, which is twice the speed of sound at roughly 25 miles per minute. 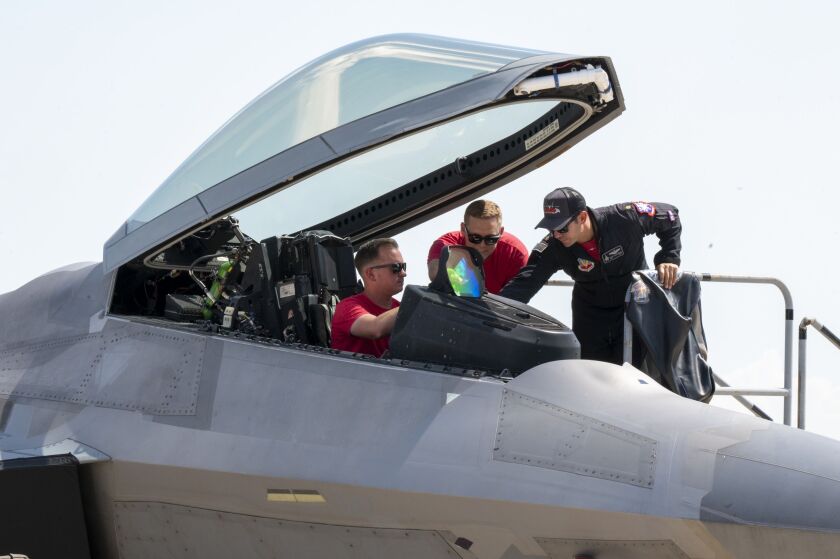 Crew chiefs with the United States Air Force, and Maj. Joshua Gunderson, right, check over Gunderson’s F-22 Raptor at Gary International Airport on Thursday. The F-22s — to be flown at the Chicago Air and Water Show this weekend — are all combat-ready jets, minus the bombs and missiles, Gunderson said.

Gunderson, who has served 18 years in the Air Force and completed two combat tours, said the jet’s capabilities — its speed, acceleration, stealth technology — are the product of decades of military technology, all rolled up into one aircraft.

The most difficult maneuver Gunderson does is the tail slide. He starts by flying the jet level, then moving quickly into a vertical climb, he momentarily hangs in the air and once the jet starts to drop backwards, he loops around until the plane is once again level.

The Army Golden Knights will also perform aerial stunts at the show — parachuting from a plane and arranging themselves into different formations.

In one stunt, a Knight pretends his parachute malfunctions, free falls for a moment, then releases a second chute.

“It’s an honor to come out and put on a show for the public,” said Staff Sgt. Gabriel Colon, who parachutes first and narrates the Knights’ performance for the crowd. 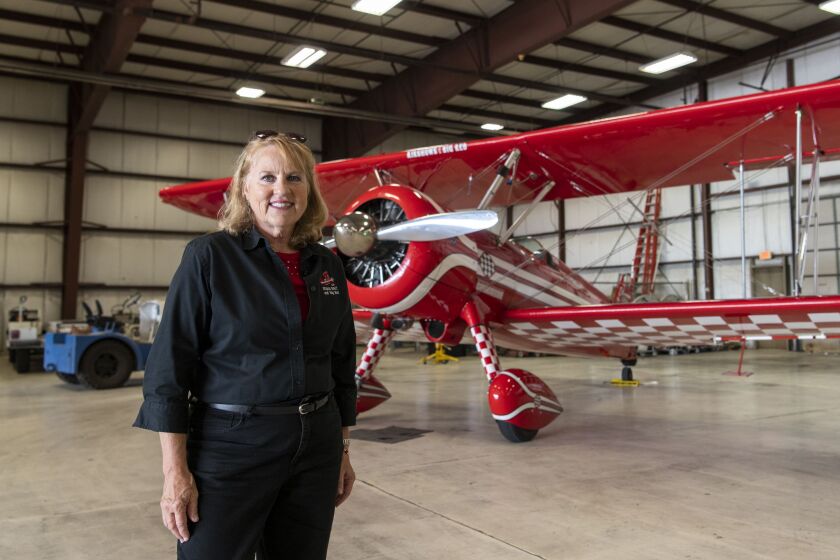 Pilot Susan Dacy stands in front of her aircraft—called “Big Red”—at Gary International Airport in Indiana on Thursday ahead of the Chicago Air and Water Show this weekend.

Susan Dacy will be one of the civilian pilots in the sky this weekend. She’ll be flying “Big Red,” a Boeing Stearman biplane that was first used during World War II to train cadets.

Dacy, a pilot with American Airlines, grew up around planes — her dad was an airplane mechanic.

One of the oldest planes in the show, Big Red is a reminder of how far aircraft technology and design has come, Dacy says.

“I really enjoy the excitement, the adrenaline of flying in the show,” Dacy said. “Seeing that crowd and the Chicago skyline is such a thrill.”

The show runs Saturday and Sunday from 10 am to 2 pm and can be seen from North Avenue Beach and along the lakefront from Fullerton Avenue to Oak Street.

Alleged child sex tape victim testifies R. Kelly had sex with her ‘hundreds’ of times before she turned 18