Chicago: ‘It’s tough to get us to not show up on stage’ | Documentary films

A silent auditorium with row upon row of empty seats. Microphones standing alone and slender with singers. Drums sitting forlornly undrummed. Casinos without beeps or clangs. Outside, the main strip in Las Vegas – typically restless and seeing thing with life – is deserted.

In a film about musicians and music, it’s this moment of quietness that conveys the enormousness of the coronavirus pandemic in March 2020. The last band on stage in Las Vegas, or perhaps anywhere, was the rock’n’roll group Chicago, abruptly silenced after half a century in which they never stopped touring and never stopped recording.

“We found out the night before that we were the only band still playing in pretty much the world, I think,” founding member Lee Loughnane, 75, recalls via Zoom from Sedona, Arizona, in an interview to promote the documentary The Last Band on Stage. “There were no masks yet. The reality of it actually being a problem had not really hit home.”

Few groups in the world can match Chicago for longevity or record sales. The name is no accident. As Peter Curtis Pardini’s film (narrated by Joe Mantegna) recalls, they formed in 1967, growing out of several bands from the Chicago area, went through a few name changes, produced 38 albums, sold more than 100m records and gained a place in the Rock and Roll Hall of Fame.

For his part, Loughnane fell in love with music thanks to a trumpet in the attic that belonged to his father, a military band leader in the second world war. “I started playing the trumpet at 11 and then I never looked back.

“One day I announced to my parents that I wanted to play music for a living and my dad tried to talk me out of it because ‘there’s no there’s no future in it, it’s only going to last a short time and it’ll be over soon, get a real job’, that kind of stuff. As it turns out, by the time they [my parents] both passed, they realized that I was doing pretty well. I was one of the few, one of the 1% that actually plays music for a living for life.”

When Loughnane, Walter Parazaider and four others began playing music together, including a distinctive horns section, the group that would become Chicago flickered into life. “We just got together and did a rehearsal at Walt’s basement and we never stopped playing together again.

“It sounded great and we enjoyed it. We liked what it sounded like and every gig that we had from that time on – we started booking club dates – and we just learned enough songs to get through the night because we were playing like six hours a night: 45 on, 15 off. ”

Early on, they toured with guitarist Jimi Hendrix. Loughnane recalls: “Jimi was very quiet. I don’t remember him doing a lot of talking but I was very shy myself, so he and I would probably sit in a room and just smoke a joint. We’d sit and watch TV, have a cheeseburger after we’d get high.”

Band members came and went for various reasons but three of the originals – half the total – are still there today: Robert Lamm, James Pankow and Loughnane. They were ceaselessly touring, performing and recording. Until the pandemic.

Artists all over the world were hit hard as they withdrew to isolation. Late-night TV hosts such as Stephen Colbert and Trevor Noah told jokes into the void of their house or apartment. But few felt the eeriness lockdown as keenly as a band whose entire working lives has been animated by live performance.

After the gig at the Venetian in Las Vegas, Loughnane and his bandmates were supposed to travel the next day to California for their next gigs but then, he remembers, “the world shut down”. Chicago assumed that life would be suspended for two weeks; that turned into a month; then that turned into two months, and so on.

The original members were forced to suspend their peripatetic existence and do something they have never done before in their lives – stay at home for more than three months. Loughnane, who has been divorced “a few times”, spent the time building a recording studio near his second home in Sedona. 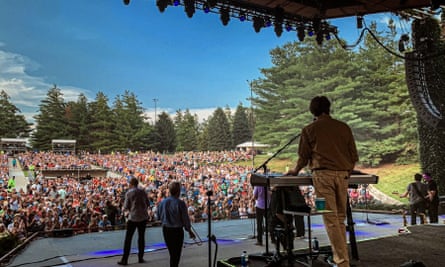 “I was still getting up and practicing every day like I normally work on the road and at the same time I was building a studio about 10 minutes from my house here,” he says. “So I was plenty busy.

“We just played it month by month, day by day, and we’re trying to figure out what to do in a home setting because we couldn’t go anywhere else. So we recorded songs and each individual band member recorded their little piece in their houses and we probably did nine or 10 songs, something like that.

“And then Peter cut all of the little pieces together and the Zoom videos were born, looking like we all were playing at the same time which is virtually impossible because only one of us can talk at a time on the Zoom meeting.”

Finally, the band returned to the stage after 15 months away with an outdoor concert in Lincoln, Nebraska. Loughnane says: “We actually got there two days early just to rehearse and get our chops back together because it was similar to an injured sports athlete coming back to his game and finding out that the game is a little a bit faster than you are at this moment.

“So you’ve got to work your way back up to speed, as it were. But seeing the audience come in, that old adrenaline rush came back again. You could see how excited they were to be with each other and ready to listen to a live performance. They were ecstatic.” 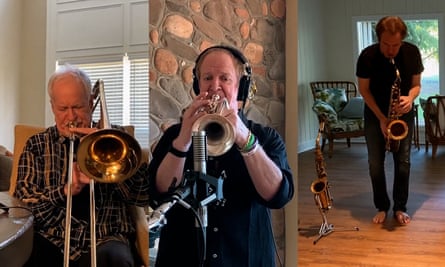 It was June 2021 and there were still variants and waves to come. But Loughnane adds: “It’s gotten to the point where it’s become incrementally more comfortable to be with each other. That’s what every audience feels now because there are fewer and fewer masks and Omicron is not quite as treacherous as the others – even though for some people it is.”

The comeback meant that Chicago preserved their record of performing every year for 55 years. They are still doing a hundred shows a year. Why? “We enjoy what we do. When we get on stage, we want to get it right every time. We want to be as perfect as we can be and we want to generate to the audience hopefully what they want to hear. And it turns out that we are pretty good at it and they want to keep coming back and hearing it again.”

Pardini, 35, who previously directed the award-winning Now More Than Ever: The History of Chicago, adds: “You look at the 10,000-hour rule that Malcolm Gladwell talks about; with Chicago we have 10m hours. Even the Rolling Stones have taken several years off at a time and they sound great. But I think for a band like Chicago, it’d be kind of difficult to suddenly be terrible when you constantly practice that much and play that much.

“Every single show, no matter where you are in the world or the country or whatever, people are reacting the same way to every song, whether they speak English or German. It’s crazy. It’s inspiring and it’s just hard work and not stopping.”

Not even Covid was able to stop Chicago for long. Loughnane reflects: “I think everybody had some form of it at one point or another but it never stopped us from working. It’s tough to get us to not show up on stage. I mean, this is all we do. I can probably drive a car pretty well, so I could do Uber but, other than that, this is my life.”