Editor’s note: This is the first of a two-part series.

Helen Jensen was busy preparing dinner for her family about 7 pm on Sept. 29, 1982, when the phone rang at her Arlington Heights home.

It was Deputy Fire Chief Charles Kramer on the line, and he needed Jensen, the village’s nurse, to come back to work.

A 27-year-old post office supervisor was dead, and two of his relatives were on life support at Northwest Community Hospital. They would die a short time later.

Jensen went to the hospital, then to the family home, and within the hour, she had a “gut reaction” about what was going on.

“They each took two Tylenol and died,” Jensen said of Adam Janus; his brother, Stanley; and sister-in-law, Theresa. “I found the bottle of Tylenol and I found the receipt for the Tylenol that had been purchased that morning. I counted the pills. And there were three people dead and there were six capsules missing. I believed strongly that it had to have been something in the Tylenol.”

Jensen was right, though doctors and investigators who gathered at the hospital didn’t believe her at first.

“Everybody there — all the men — pooh-poohed me. ‘What does she know?’ ‘She’s just a nurse’ and ‘She’s a woman, she couldn’t figure this out.’ They would not believe me,” Jensen said.

The next morning, toxicology reports confirmed the Tylenol capsules had been contaminated with cyanide. Within the next few days, four more deaths were tied to the poison capsules: 12-year-old Mary Ann Kellerman of Elk Grove Village; Chicago flight attendant Paula Prince; Mary McFarland, a single mother from Elmhurst; and Mary Reiner of Winfield, who had just returned home from the hospital after giving birth to her fourth child.

By 10 am Sept. 30, at Jensen’s direction, the store shelves at every grocer and drugstore in town were cleared of all Tylenol bottles. She was the first to call drugmaker Johnson & Johnson, which soon pulled all 31 million bottles of the product off the shelves nationwide.

In an era before the internet and social media, police and firefighters in Arlington Heights and other suburbs went up and down streets using loudspeakers to warn people not to take the pills. Similar announcements were made at schools. Unknown if the poisonings were random or targeted, a sense of fear and hysteria quickly enveloped the region.

“It could’ve been (worse). We saved lives. I’m very proud of that,” said Jensen, now 85 and retired. “If Charlie hadn’t called me and I hadn’t gone over to the hospital, there would’ve been more deaths.”

The panic that began in Cook and DuPage counties — where contaminated capsules killed seven people in three days — spread across the country and changed communities forever. While the poisonings led to consumer product safety improvements, the case has confounded investigators for four decades and remains the biggest unsolved murder mystery in suburban history.

“It was an act of terrorism. And we didn’t know that word then. Forty years ago nobody heard ‘domestic terrorism.’ And that’s what it was,” Jensen said. “I couldn’t believe anybody would do that — take pills and put something else in them. Heavens. In many ways, I was naive. We all were. The world was.

“We lost our innocence.” 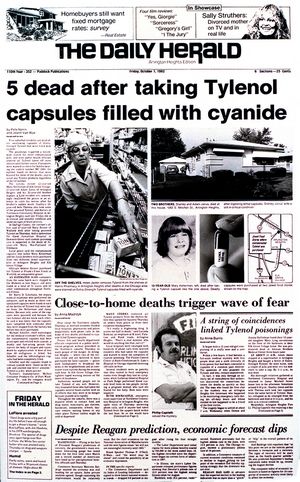 Nick Pishos was on call on Sept. 29, 1982, at the Cook County medical examiner’s office. It wasn’t uncommon for the deputy investigator to be dispatched to a crime scene involving multiple deaths, like he was that night at the Janus family home.

“So I just thought of it as another one. We didn’t know at the time, going out there, any of the details,” Pishos said.

He searched the house for clues — like items that may have been purchased that day, including a Tylenol bottle. He overheard a paramedic talking about a similar, strange death that occurred earlier in the day in nearby Elk Grove Village — that of 12-year-old Mary Ann Kellerman.

Elk Grove investigators also inventoried a Tylenol bottle during their investigation and brought it over to the hospital so Pishos could have a look.

“I was looking over the bottles and I noticed that the Tylenol bottle they brought me and the Tylenol bottle I had were the same batch numbers and everything. So that’s when I opened them up, and as soon as I popped them, I whiffed the aroma that came out of them,” said Pishos, describing it as bitter almonds. “I’ve smelled it before. I knew the smell from chemistry classes in college.” Employees of the Chicago Department of Public Health tested thousands of Tylenol products for poisoning in the fall of 1982, after seven people died from cyanide-laced capsules.
— AP Photo/Charlie Knoblock

It was cyanide, he told police detectives.

Now after midnight, Pishos returned to the office and waited until the morning when the top doctors arrived for work. Initial tests were complete, and it was indeed cyanide, he was told.

That morning, Leslie Sass was getting ready to start her job at 6 am at the Elk Grove Village Police Department — around the same time first-shifters were ready to clock in at their factory jobs in the village’s sprawling industrial park.

Word was starting to get out on drive-time radio and TV newscasts about potentially dangerous Tylenol. Police using bullhorns drove through residential neighborhoods to issue warnings.

Sass, a community service officer, went door to door at factories to collect bottles from medicine cabinets and first-aid kits. She handed out notices for businesses to alert employees.

“Sometimes people at work in the factories just don’t know what’s going on in the outside world, and that’s what we were scared of,” said Sass, who is now assistant to the police chief. “At that point in time, the influx of workers into Elk Grove in the daytime was thousands of people, and we were kind of worried about them.”

She collected bottles — enough to fill a small box in the trunk of her car — until about 10 pm “I don’t know if I was scared, but my senses were heightened to have gloves on, to take (bottles), put them in the box and not do anything with them.” 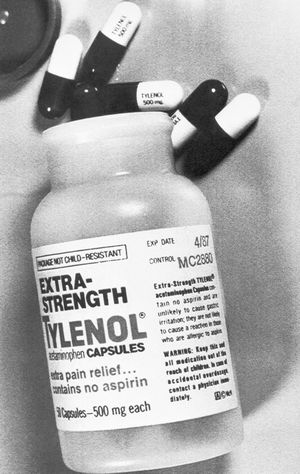 This Sept. 30, 1982, photo shows a bottle of Extra-Strength Tylenol from the same lot that left seven Chicago-area residents dead from cyanide poisoning. Now, gel-coated caplets that are harder to pick apart and tamper with are the industry standard.
– AP Photo/File

Many of the bottles collected by police and taken from store shelves ended up in a basement laboratory two floors below Daley Plaza in downtown Chicago. The city health department’s lab provided surge backup to the crime labs of the Chicago Police Department and Illinois State Police.

Michael Petros, a microbiologist, was an acting section chief who helped oversee the tedious process of picking apart capsules from Tylenol bottles collected across the city.

“We accepted the bottles as they were received in our receiving room or when police or other authorities brought them into us. And then we just divided them up,” said Petros, one of about 80 staffers who worked 12-hour shifts that first weekend in October. “We did not maintain a tally as far as I could recollect. We were mainly just concerned with opening the bottles, pulling the capsules apart, and seeing if we could identify crystals of cyanide. I can safely say we looked at thousands of pills, if not tens of thousands, from thousands of bottles that were sent to us.”

The group under Petros’ supervision didn’t find any cyanide-laced capsules, but the toxicology section identified at least one bottle from a drugstore where other contaminated bottles were found.

Petros, now a clinical assistant professor at the University of Illinois-Chicago School of Public Health, said the typical work at the city lab back then involved testing in a whole range of areas, including Lake Michigan water quality, animal rabies, sexually transmitted diseases and other public health concerns.

But the lab scientists hadn’t quite seen anything like the Tylenol case.

“For the screening process, it was a matter of reassuring Chicago residents and assisting law enforcement to assure them that there were not other bottles like this out there,” Petros said. “And that was the key. Because there was panic on the part of the public. It was big news.”