This is Good News Sunday, a compilation of some of the more upbeat and inspiring stories published recently by the Daily Herald:

Nine-year-old Maddox Yates-Benter, who has autism, was devastated when BD’s Mongolian Grill in Naperville unexpectedly closed because of a burst water pipe and he couldn’t come inside to hit the gong.

“There are certain things in life that he just loves, and there’s not many. But one of the things is hitting the gong at Mongolian barbecue,” said Patrick Dalton, one of his dads. “If it was up to him, he’d be going there every single day. That whole car ride he was so excited to hit that gong.”

Dalton called the restaurant. Luckily, General Manager Kirsten Simmons was still inside while repairs were being completed. Simmons not only allowed Maddox inside to hit the gong for almost a half-hour, but she also gave the family “Mongo Money” coupons so they could eat for free that night at a sister restaurant in Bolingbrook.

To top it off, restaurant CEO Gregg Majewski gave Maddox and his parents a surprise free trip to Disney World — a gift he matched for Simmons and her two young children.


Cmdr. Les Durov, left, and Dutch DeGroot have worked hard to make VFW 1337 of Mount Prospect one of the highest-ranked posts in the world.
– Mark Welsh | Staff Photographer

The Veterans of Foreign Wars Post 1337 in Mount Prospect has grown from 70 members to 117 in the past few years.

“I don’t like to brag,” says Dutch DeGroot, 72, a post member who also serves as service officer for the VFW 4th District of Illinois, “but we are basically one of the top posts in the world, not just the countries.”

The Mount Prospect post has been awarded All American status the past three years, and is counting on grabbing the VFW’s highest honor again this year. It does that by honoring “yesterday’s defenders of freedom” while focusing on the challenges veterans face today.

“Are you getting your benefits?” asks Les Durov, 70, commander of Post 1337, repeating the question that has become a mantra for the VFW.

“I get calls every day from veterans or families needing help,” says DeGroot. He knows how to move through the bureaucracy to find the benefits they’ve earned. Shauna Fetterman, center, of Fox River Grove and her teammates Lizzie Scudder, left, and Carrie Jones will compete on Food Network’s “The Great Food Truck Race.” The first episode of this season airs June 5.
– Courtesy of the Food Network

A dream 10 years in the making is coming true for a Fox River Grove woman with a unique food concept.

Shauna Fetterman, a culinary school-trained chef, wants to compete on the 15th season of the Food Network show “The Great Food Truck Race” with her arancini-themed concept, Girl’s Got Balls.

The season premieres at 8 pm Sunday, June 5, on Food Network and Discovery+.

Arancini is an Italian rice ball traditionally made with risotto, parmesan and fillings such as pancetta and peas, then coated with bread crumbs and deep-fried. Fetterman gives them their own special twist.

“I’ve actually been wanting to be on the show for about 10 years,” Fetterman said. “I’m a really big fan of it and would always watch it.” 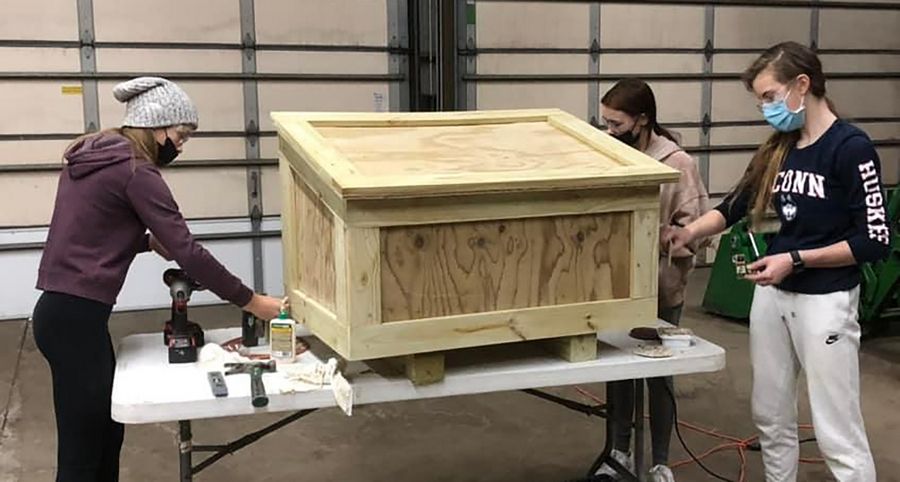 The lockers, which are filled with donated and store-bought sports equipment, will be placed at the Itasca Park District and behind Franzen Intermediate school in Itasca.

Under the guidance of Matt Alexander of the Itasca Park District, the Scouts developed a plan to design the lockers, shop for materials and build them. The idea of ​​the lockers (two were constructed) is based on a trust-return policy — when borrowers are done playing with the equipment, they return it, so someone else can reap its rewards.

“It was a great experience, and I hope the community will enjoy our creations,” said Girl Scout Allison Gogola, 14.

Maverick Ohle can do heavy lifting for Naperville Central