Chicago’s Lakefront Park System Comes Up Short at Both Ends. Is It Time To Revive the ‘Last 4 Miles’ Plan? | Chicago News

(Courtesy of City of Chicago)

Chicago’s lakefront spans 30 miles. Chicago’s string of lakefront parks and beaches doesn’t. Instead, it measures 26 miles, with public access blocked at various points on the shoreline’s north and south ends.

There have been movements in the past to fill in those gaps — dubbed “the last four miles” — and create a truly unbroken end-to-end lakefront park system that would stretch from the Indiana state line all the way up to the Evanston border .

Friends of the Parks is wondering if the time is ripe to revive the idea.

High lake levels, the erosion of beaches and concerns about flooding have brought renewed attention to the city’s shoreline. Earlier this year, the federal government announced it would go 50-50 with the city on a $3 million comprehensive study of Chicago’s lakefront, the first to be conducted by the US Army Corps of Engineers in more than 25 years.

“There’s a convergence of energy and intentions that has not been there,” said Juanita Irizarry, executive director of Friends of the Parks. “It’s a moment to leverage that energy.”

If there’s going to be a conversation about redesigning the lakefront, consideration of the last four miles should be in the mix, she said. To that end, the organization dusted off its “Last Four Mile” plan, created in 2009, and recently presented it anew during Friends of the Parks’ Netsch Lecture series.

The goal of the presentation, Irizarry said, was to re-start the discussion surrounding those remaining miles and the role they could play in terms of providing shoreline protection via nature-based solutions, promoting biodiversity and delivering green space to areas where it’s in short supplies.

Here’s a refresher on the issue.

WHERE ARE THE LAST FOUR MILES?

— Ardmore Avenue to Pratt Avenue, there’s a gap between Hollywood Beach and Loyola Park, with a handful of unconnected beaches in between.

— Touhy Avenue to the Evanston border, there’s a gap between Leone Beach and Juneway Beach, also with unconnected beaches in between. 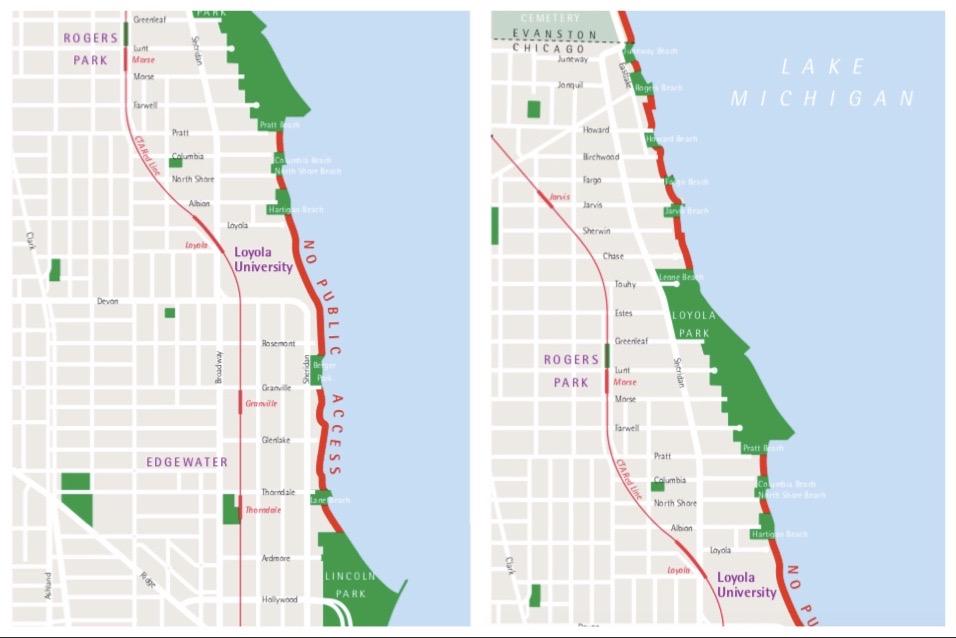 Gaps in the lakefront park system on the north end of Chicago’s shoreline. (The Last Four Miles report / Friends of the Parks)

— 71st Street to 75th Street, there’s a gap between the South Shore Cultural Center and Rainbow Beach Park. Apartment buildings and single-family homes are built on the lakefront. 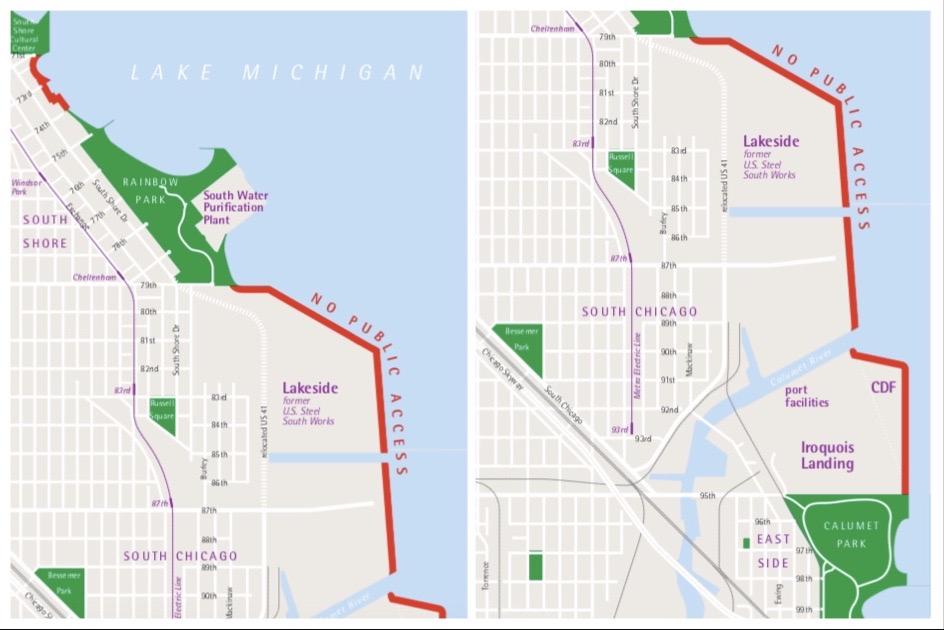 Gaps in the lakefront park system on the south end of Chicago’s shoreline. (The Last Four Miles report / Friends of the Parks)

The stretch from 79th Street to the Calumet River was once home to US Steel’s South Works. Redevelopment of the site would incorporate lakefront parkland.

The stretch from the Calumet River to 95th Street consists of port facilities and a “confined disposal facility.” The latter is essentially a landfill operated by the Army Corps to store polluted sediment dredged from the Calumet River and the Cal-Sag Channel. The CDF was to have been capped and turned over to the park district in 2022 but the Army Corps is asking to extend the facility’s life for another two decades. The Illinois EPA is reviewing that request, having already issued a one-year extension.

The 2009 plan would have added 500 acres of new parks and beaches to the lakefront system, some by the greening of existing land such as the US Steel site. But other sections would be built from the ground up (or should we say the lake bed up), drawing on many of the same techniques used to construct almost the entire lakefront as Chicagoans know it today.

“Most Chicagoans don’t know it’s engineered. They think (the lakefront’s) natural,” said Paul Boyd, who was a member of the 2009 Last Four Miles committee.

In actuality, the parks sit atop landfill and the beaches only exist because piers jutting into the lake trap sand that would otherwise wind up in Indiana.

Those manmade parks and beaches not only provide green space and opportunities for recreation, but they also serve as a natural buffer between Lake Michigan and Chicago.

On the North Side: Extend the shoreline east with new beaches and parks. Submerged breakwaters or reefs would create new aquatic habitat, according to the plan. Pedestrians and cyclists could continue on the lakefront path up to Evanston without having to detour onto congested city streets in Edgewater and Rogers Park.

The new parks would protect the shoreline from erosion, a more attractive option than “dumping a bunch of boulders,” said Thom Greene, an architect who was a member of the Last Four Miles design team. 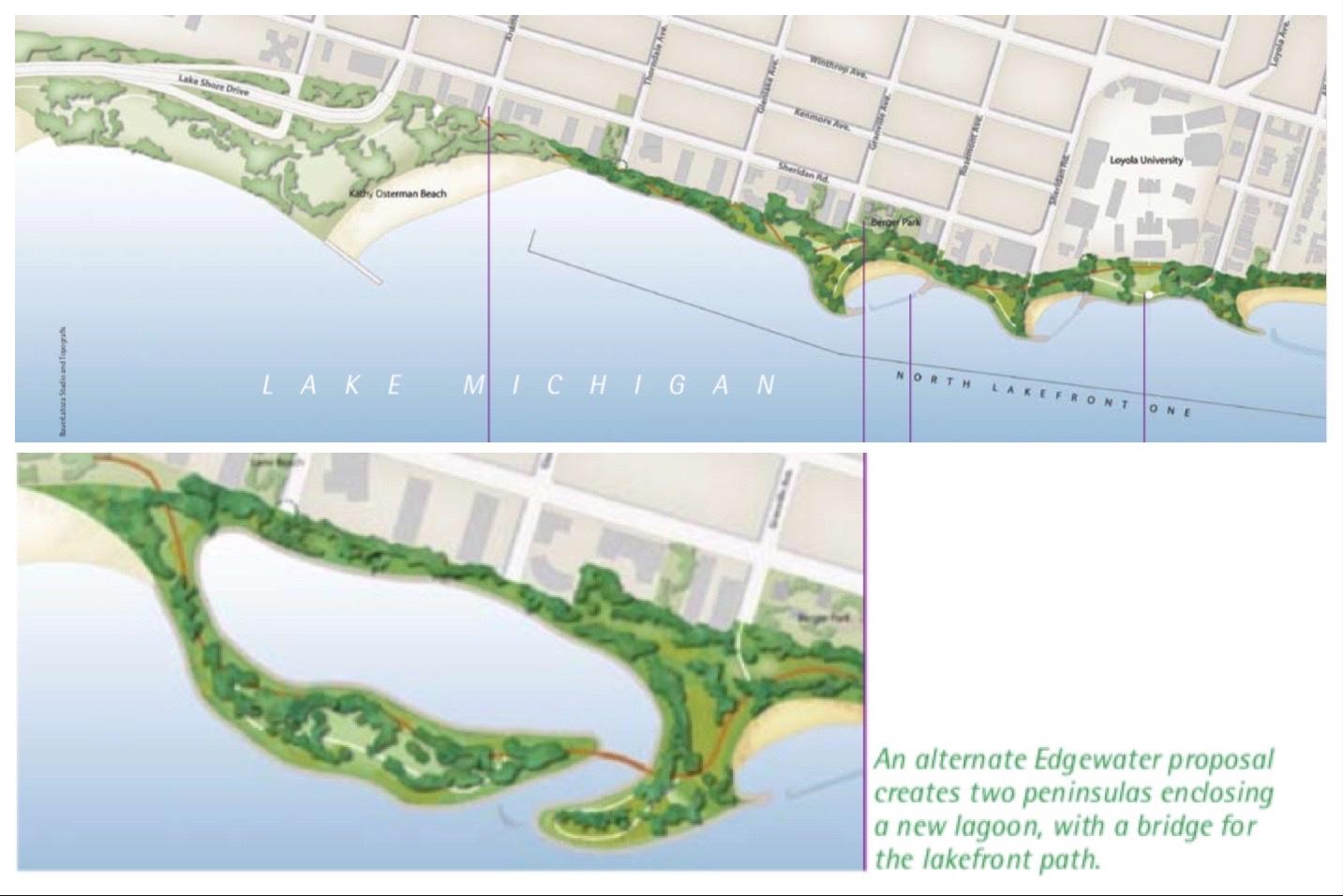 Proposals to create new, connected parks on Chicago’s north lakefront in the Edgewater neighborhood. (The Last Four Miles report / Friends of the Parks) 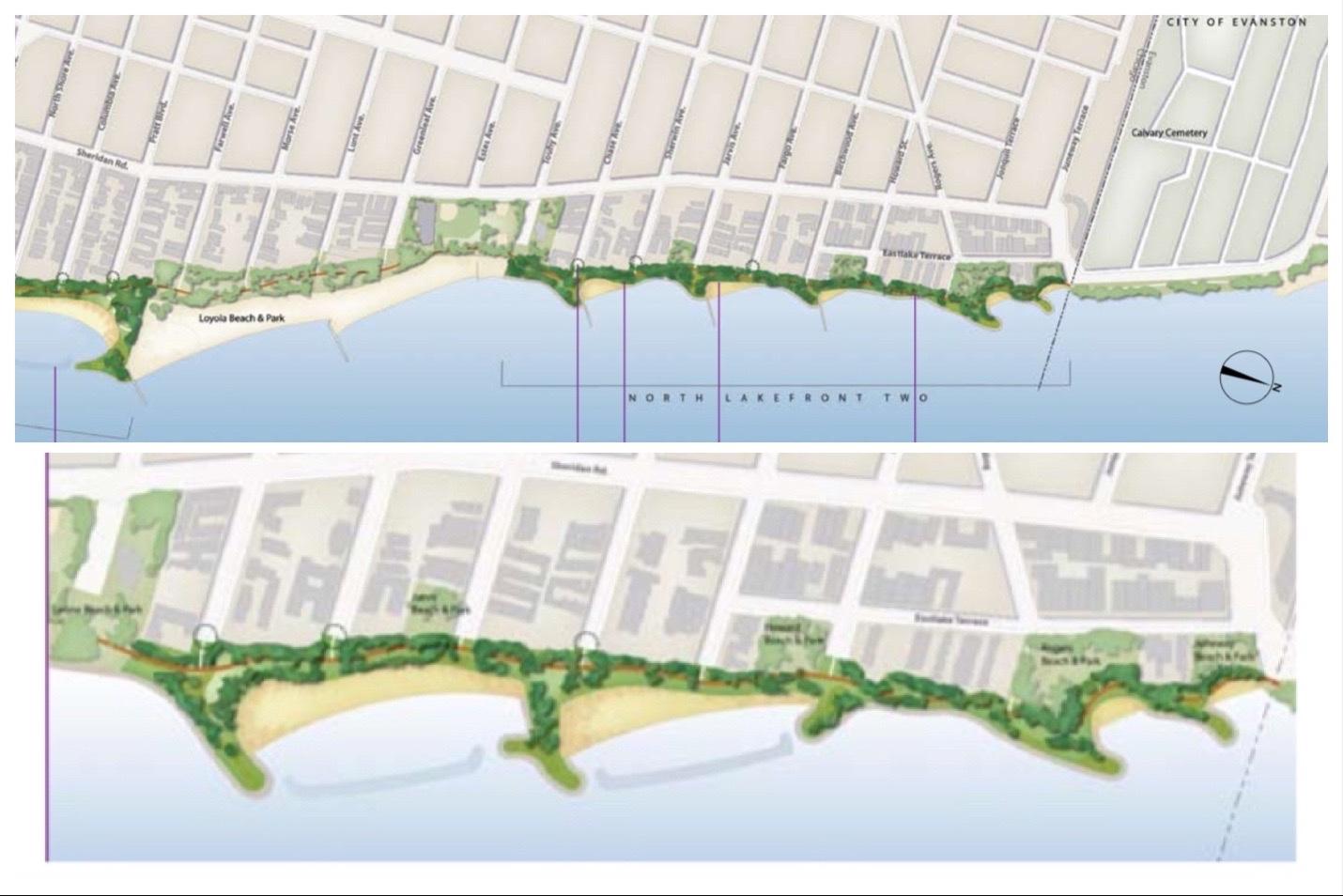 Calumet River to 95th Street: 140-acre expansion of Calumet Park, creating a mirror image of the existing park, but with more passive amenities. 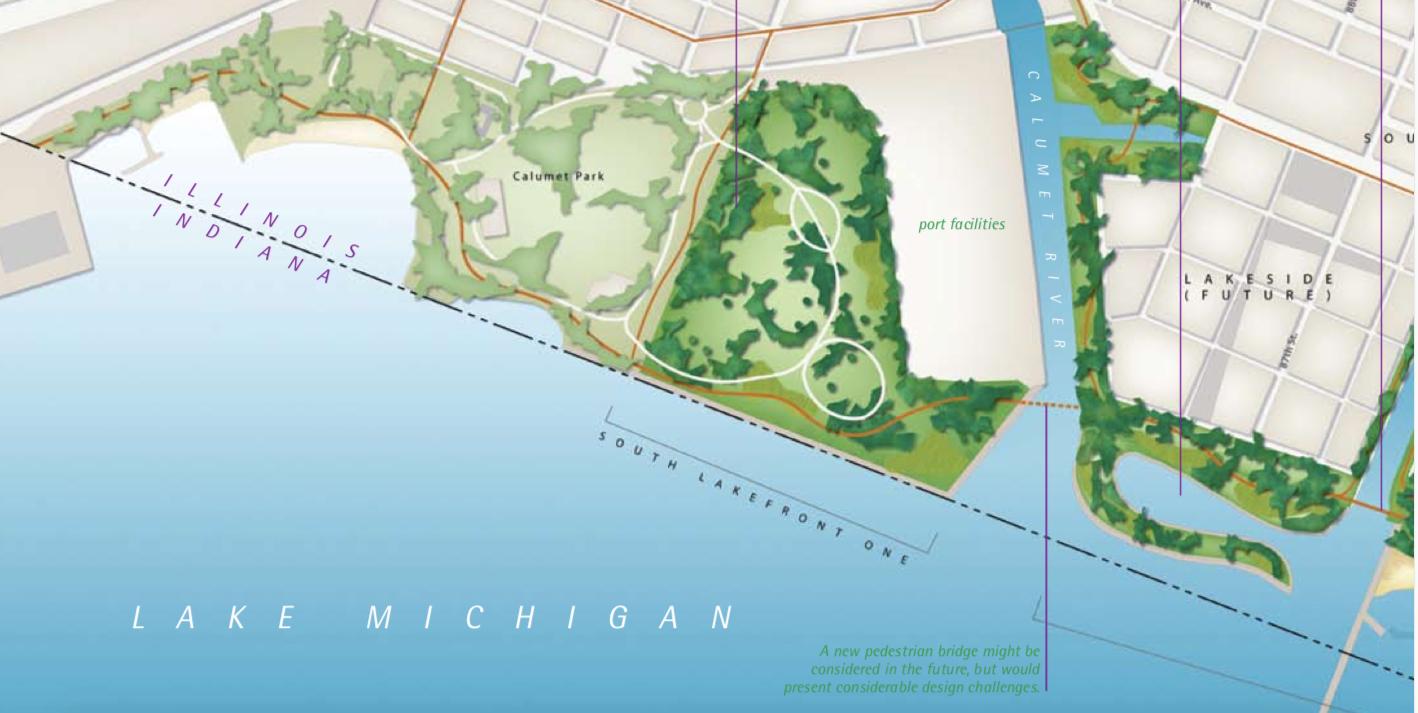 A proposal for additional parkland that would mirror Calumet Park on the south end of Chicago’s lakefront. (The Last Four Miles report / Friends of the Parks)

71st Street to 75th Street: Extend the shoreline east and create a new park and beach, along the lines of the North Side plan. An alternative option for this site would be to create two peninsulas, connected by a bridge for the lakefront path to cross the new lagoon. 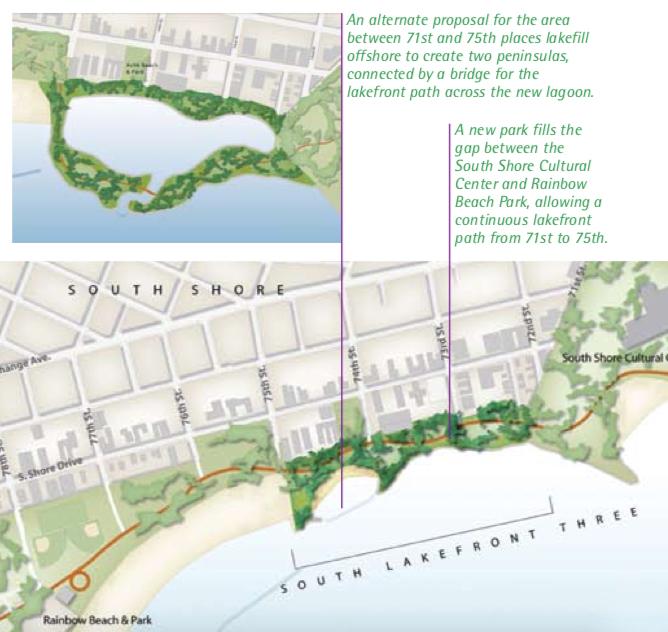 Options for connecting the lakefront system between Rainbow Beach Park and the South Shore Cultural Center. (The Last Four Miles report / Friends of the Parks)

WHAT ARE THE CHALLENGES?

The 2009 plan was the result of a multi-year process that included numerous community meetings and apparently had the backing of then Mayor Richard M. Daley.

“We had a lot of support. It was only in the last months that the opposition came out,” said Boyd.

Part of the resistance came from the private residential property owners who live along the stretches of lakefront targeted for public access. Any effort to revive a Last Four Mile plan, in whatever shape it may eventually take, should be prepared to face the same fight.

The key, Greene said, is to treat each segment like a neighborhood park and to obtain community input and buy-in.

Other hurdles to clear will be the lack of confidence people have in existing revetments and barriers when it comes to holding back erosion and flooding. South Shore residents participating in the Netsch Lecture questioned the wisdom of creating new beaches and parks from landfill when existing shoreline areas built in the same way are being overrun by the lake.

The most immediate obstacle to achieving the Last Four Miles is the Army Corps’ push to extend the use of its confined disposal facility for another 20 years. Friends of the Parks has joined with South Side community and environmental organizations to stand against the extension.

HOW MUCH WOULD THE LAST FOUR MILES COST?

In 2009, costs were pegged at $350 million to $450 million, with options like the creation of lagoons accounting for the higher end of cost estimates, Boyd said.

In 2022 dollars, the price tag for the Last Four Miles could be double the original estimate.

“We deserve it,” Boyd said.

As Irizarry emphasized, there’s no directive from city officials to redesign the last four miles, nor is there funding. At this point, the conversation surrounding those stretches of the lakefront is purely speculative.

But there’s little question investment is needed in Chicago’s shoreline, said Joel Brammeier, president and CEO of Alliance for the Great Lakes.

The sheer extent of the city’s shoreline puts it in a uniquely vulnerable position, he said, and greater resilience is called for up and down Chicago’s lakefront, be it public or private property.

Great Lakes communities as a whole are behind their marine coastal counterparts in terms of preparedness to withstand encroaching waters, Brammeier added.

Though coastlines haven’t been on the radar of the Great Lakes Restoration Initiative, a federal funding source that could be changing, he said, as lawmakers explore the next generation of what’s needed to restore and protect resources across the region.

If or when dollars become available, the city should have a plan in place, said Greene. “You want to be in line and be ready when there’s money,” he said.

‘They’re not newspapers’: Inside the mysterious publications on…

Letter to the editor: Is Evanston’s Climate Action Plan sustainable?