The Chicago Teachers Union and United Working Families are so determined to defeat Mayor Lori Lightfoot, they’re endorsing a mayoral candidate who has not yet entered the race — and refusing to wait for a bigger-name challenger who won’t say when he’ ll make up his mind.

With a shared progressive agenda, both groups endorsed Cook County Commissioner and CTU organizer Brandon Johnson, who has formed an exploratory committee, but has not yet declared his candidacy.

US Rep. Jesus “Chuy” Garcia (D-Ill.) sent an email to the United Working Families party committee asking them to defer last weekend’s mayoral endorsement, but the group refused because Garcia was unwilling to give them a timeline for his decision.

Both resolutions urge Johnson to run and “constitute an endorsement” if he does.

“Our members did talk to Chuy that day and said, ‘If you can tell us to defer for two days or five days, that’s a different consideration. But if it’s to defer indefinitely, we just need to give the members that information and let them decide,’” Emma Tai, executive director of United Working Families told the Sun-Times.

“It’s just our experience in previous campaigns that you never get time back and we don’t have unlimited money to make that up.”

On Wednesday night, the CTU’s House of Delegates approved a similar resolution on the heels of the CTU’s recent $59,900 donation to Johnson’s campaign fund. Roughly 700 members were in attendance at CTU headquarters, 1901 W. Carroll Ave. The voice vote was overwhelming, with only a handful of delegates shouting “no.”

Garcia did not return phone calls or text messages seeking comment on Thursday.

Johnson said he was “honored and humbled that the movement we have built and have grown” over the last decade “sees me as a trusted voice to carry the movement to the fifth floor” at City Hall.

“This type of motivation is quite compelling. It’s very energizing. And it’s what I’ve experienced since I’ve been moving about throughout this city where the coalition continues to grow,” Johnson said.

As for Chuy’s failed plea for United Working Families to wait, Johnson said only that both he and “the movement” understand the “urgency of this moment.”

“In order to defeat the corporatization of our public spaces, you’re gonna need a broad-based movement, and that movement has to move with some expediency,” Johnson said.

Pressed on when he will formally declare his candidacy, Johnson said: “Soon. Really soon. Now that my son … is well established in his freshman year [of high school]my wife and I … feel comfortable moving ahead in the very, very near future.”

Cook County Commissioner Brandon Johnson at a May 2021 news conference where he called on the full county board to fund the Budget for Black Lives.

In 2015, Garcia stepped up to challenge incumbent Mayor Rahm Emanuel when Garcia’s longtime friend, Chicago Teachers Union President Karen Lewis, was forced to abandon her mayoral ambitions after being diagnosed with a brain tumor.

Garcia’s charismatic and energetic campaign forced Emanuel into Chicago’s first mayoral runoff. Emanuel survived — with 56% of the vote — after outspending Garcia nearly 4-to-1.

The CTU contributed $500,000 to Garcia in that campaign. The American Federation of Teachers matched that donation. Scores of CTU members served as Garcia’s campaign foot soldiers.

The question now is whether Garcia will enter the race without his most formidable supporters in the progressive movement, and if he does jump in, whether CTU or United Working Families will reconsider their early endorsement of the lesser-known Johnson and shift their support to Garcia .

“We can talk about that, when and if it happens,” Tai said.

Pressed on whether she is concerned about a divided progressive movement, Tai said: “Of course. It’s a natural concern. And neither of these candidates are in right now. …It’s a very fluid situation.”

Johnson said he is “confident” he will retain the CTU and United Working Families endorsements, whether or not Garcia enters the race. 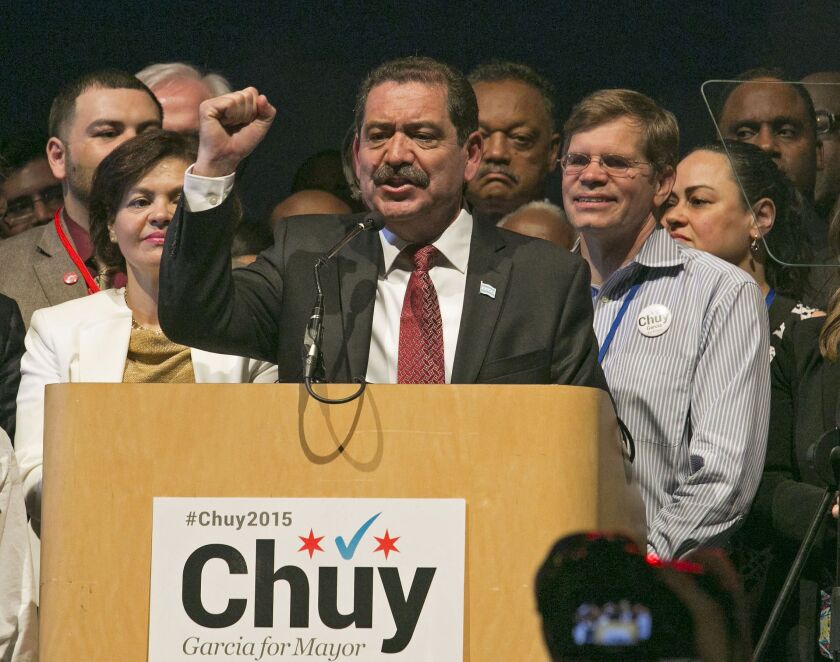 Six months ago, Garcia all but ruled himself out as a potential mayoral challenger — even as he declared Lightfoot more vulnerable than any Chicago mayor in the last 40 years.

“I am not thinking about that whatsoever, and I surely haven’t talked to my wife about it. I’ve got to think that she’d be very reluctant for us to do it, and we do everything together. It’s not on my radar right now. … I treasure that [2015] run. But I was a little younger” then, the Chicago Democrat said in March.

“The job is a huge bear, and it will continue to be challenging and torturous on a daily basis, especially as [federal] Funding dissipates and goes away. It will make it excruciatingly difficult to govern and provide good news to Chicagoans.”

He said he was seriously considering joining the increasingly crowded field seeking to deny Lightfoot a second term and that the chances of him entering the mayoral race had improved to “50-50.”

Pressed to say what had changed, Garcia pointed to a barrage of phone calls from people who “understand the city and the challenges and want to build the coalition that will bring people together and participate in moving the city forward over the next four years.”

“I can make the case of how I think I can make a difference and get our city to a better place — if I decide that I want to undertake this challenge,” Garcia said on that day.

“People are urging me to do it. … I’m taking a close look to see if I feel that I am best suited to lead the city in the event that I decide to take the plunge.”

Garcia acknowledged on that day that he is “conflicted.” He finds his job in Congress “exhilarating” and has a “great desire to be a member of Congress when immigration reform finally becomes a reality.” His wife is also “not a yes,” Garcia said then.

A few weeks later, Nuestro PAC, a national political action committee focusing on Latino voters, attempted to pressure Garcia into joining the race by commissioning a poll showing a head-to-head matchup essentially tied, with Garcia at 24% and Lightfoot at 25 %.

Johnson was one of five candidates each hovering between 0% and 4%.

Garcia responded to the poll by telling the Sun-Times he was aiming to decide by mid-October, with the odds changing daily.

Johnson’s best — some say only — chance is to keep Garcia out of the race and hope he can excite a teachers union membership that has fought Lightfoot tooth and nail. He also must unite and energize a progressive movement determined to unseat the mayor and seize the opportunity presented by a City Council in transition to elect more reform-minded alderpersons.