A federal appeals court on Friday ruled in favor of Gov. JB Pritzker in his bid to end judicial oversight of the state’s employment practices under the Shakman decree — a decision the decree’s namesake himself doesn’t agree with.

Pritzker moved to vacate the half-century-old Shakman decree with state lawyers telling the 7th US Court of Appeals that “there is no evidence the state is considering political factors in hiring today.”

The final judgment, filed on Friday, vacates the 1972 consent decree as it applies to Pritzker and state jobs.

“The power to hire, fire, and establish accompanying policies needs to return to the people of Illinois and the Governor they elected,” Appellate Judge Michael Y. Scudder Jr. wrote in the opinion.

“The federal courts will remain open to decide individual cases of alleged constitutional violations should they arise. But no longer shall the Governor’s employment practices and policies have to win the approval of a United States court.”

gov. JB Pritzker speaks during a news conference at in the Gresham neighborhood in May.

The Shakman decree banned political considerations in hiring and firing, though there are some exceptions. But the governor argued state agencies no longer need a watchdog to prevent patronage hiring.

The decree is named for good-government lawyer Michael Shakman, who filed the original landmark lawsuit in 1969 and won the consent decree in 1972.

Shakman told the Sun-Times on Friday that Illinois isn’t ready to end the decree, because more time is needed to get the state’s employment plan and enforcement procedures running. Shakman previously supported the end of the decree for hiring by Chicago and much of Cook County.

“I appreciate the work the judges do, the federal judges. Having said that, I respectfully disagree with their decision today,” Shakman told the Sun-Times.

“We’ve been eager to get people out of the federal court and back in the business of running their own employment systems,” Shakman said.

“We’ve asked that every … government agency have an employment plan, have an enforcement procedure for that plan that’s designed themselves, but actually running and showing that it works. And that’s all we asked from the governor. Unfortunately the governor hasn’t done that yet.” 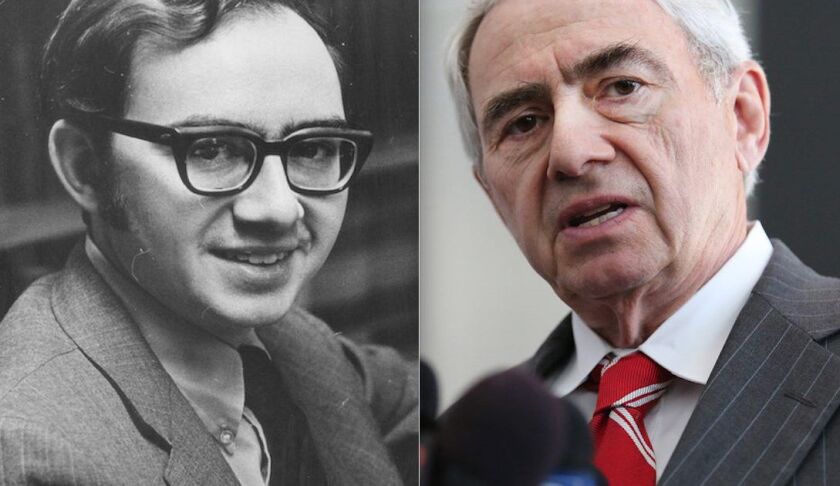 Shakman argued that the employees hired to enforce the state’s hiring policies have only been on the job since last year and are just getting up to speed. And the state is still testing its own procedures.

“The opinion makes the point that Gov. Pritzker is a person to be trusted, a person who understands the responsibilities of the governor’s office and his constitutional responsibilities. I assume every one of those facts is correct,” Shakman said.

“But none of them really addresses the fact that Gov. Pritzker is not making the hiring in state government. That’s being done by hundreds of people that he has never met. And he never wants. Some of those people were hired through the patronage system. Some of them are loyal to the politicians who got them their jobs.”

“The notion that Gov. Pritzker is a good scout, to put it simply, I completely agree with. But that has nothing to do with who’s actually running state employment systems,” Shakman said.

While Chicago, most of Cook County and now Illinois are no longer under a federal monitor, some county agencies remain under the Shakman decree, including the county Assessor’s Office, the Clerk of the Circuit Court of Cook County, the Metropolitan Water Reclamation District and the Juvenile Temporary Detention Center.

Friday’s ruling outlined that six different federal judges have overseen Shakman cases since 1969, with at least, 1,000 status reports filed since the decree took effect in 1972 — creating a huge caseload.

“The federal docket now includes over 10,000 entries—the first from October 1969 and the most recent from this week,” Scudder wrote. “What may have started with a federal court’s well-grounded injunction came to look more like indefinite federal judicial supervision of state employment practices.”

Scudder wrote that the governor has “implemented a durable remedy and satisfied the objectives of the 1972 decree,” including a monitoring division within the Office of Inspector General and a limited list of exempt political hires. 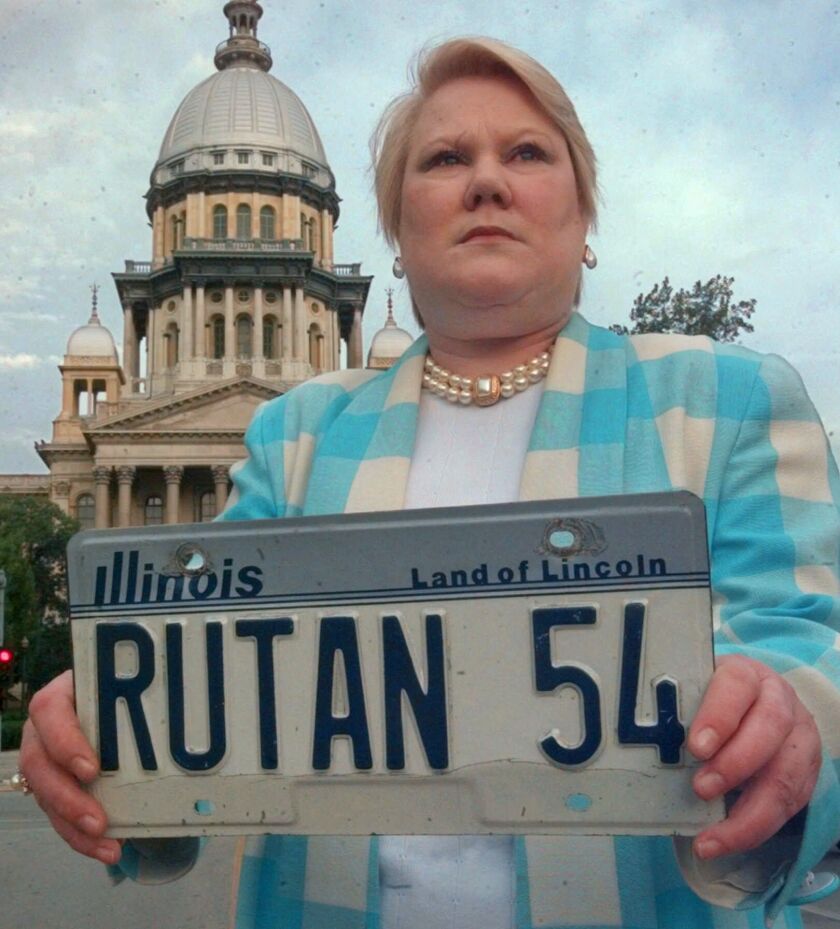 Illinois state employee Cynthia Bard Rutan shows off her personalized Illinois license plate in front of the Illinois State Capitol in Springfield in 2000. The plate represents the 5-4 vote by the US Supreme Court in her case, which dealt a blow to political patronage in Illinois.

Political hires — or so-called Rutan-exempt employees — are staffers in management or policy-making positions who serve at the will of the governor and are exempt from union or civil service protection.

The Rutan decision is named after Cynthia Rutan, a Department of Rehabilitation Services worker who along with four other state employees won the right to a trial in US District court to prove their claim that they failed to win a promotion, a new job, a transfer or a recall because they were not backed by the state Republican Party.

In 1990, the US Supreme Court issued a ruling in the Rutan case, declaring patronage hiring unconstitutional in Illinois.

Besides Shakman, others weren’t pleased with the ruling, including state Rep. Deanne Mazzochi, R-Elmhurst.

“Illinois has spent 50 years trying to root out corruption in state hiring and, as we all know, the problem persists,” Mazzochi said in a statement. “This isn’t the time for Governor Pritzker to pat himself on the back and say job well done at the same time he hires people from clout lists. We have to remain vigilant about corruption in state hiring.” 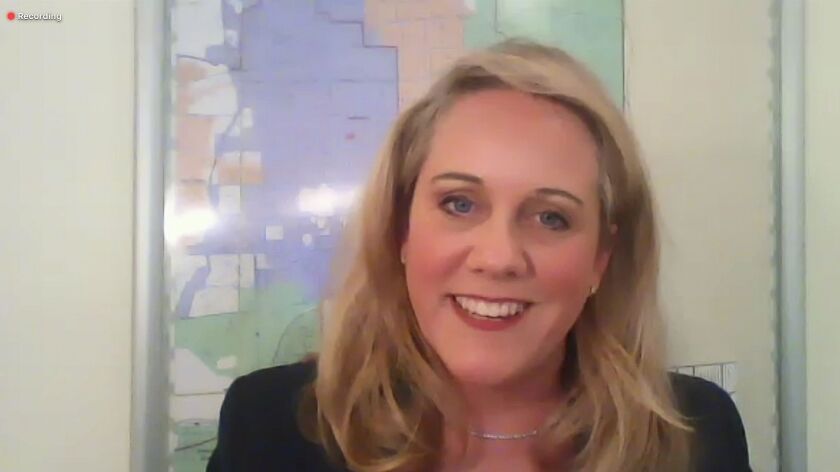 Cook County in 2018 was removed from the constraints of the Shakman decree, with Magistrate Judge Sidney I. Schenkier finding the county to be in “substantial compliance” with fair hiring and employment practices.

Cook County Board President Toni Preckwinkle had argued that since 2006, the Shakman suit had cost county taxpayers around $8 million. Around $3 million of that went to claims from employees who said patronage played a role in them advancing in their careers.

A federal judge in 2014 released Chicago from the consent decree. Since 1972, Chicago taxpayers had spent $22.9 million to create a $12 million fund created to compensate victims of the city’s rigged hiring system; $6.6 million for the hiring monitor; $1.8 million for consultants; $1.5 million for plaintiff’s counsel; and $1 million to outside counsel.