If Democrat Toni Preckwinkle wins her bid for a fourth term as Cook County Board president, she will be setting the stage to hold the office longer than anyone except George W. Dunne, the party stalwart who served nearly 22 years.

But she will first need to fend off former Cook County Board Commissioner Richard Boykin, to an Oak Park lawyer who argues that Preckwinkle has lost a step in recent years and was caught flat footed with gas prices soaring and incessantly rising inflation.

What the county can do about those problems is limited, but the responsibilities of the office are still considerable. The next president will oversee the county’s more than $8 billion budget, which grew significantly because of an injection of federal cash brought in from the American Rescue Plan Act. The $1 billion in federal aid will help fund county programs through 2024.

“This is a historic moment, we aren’t just coming out of the pandemic, but we have $1 billion in federal resources to invest in our residents and our community,” Preckwinkle told the Sun-Times. “That’s a historic opportunity that local governments haven’t had since the Great Depression.”

With more than 30 years in city and county offices, Preckwinkle has positioned herself as one of the county’s most senior progressive leaders, championing affordable housing efforts, criminal justice reform and public health improvements. Now she hopes to infuse the federal aid to support those progressive ideas.

So far, the Hyde Park Democrat has pushed through several policies with the pandemic-related money — including the Promise Guaranteed Income Pilot. That program will pay 3,250 residents $500 a month for two years in an attempt to tackle poverty and growing racial inequities throughout the county.

She also said the county is developing a program to pay off medical debt for those financially underwater, but she couldn’t provide more specifics on how it would work just yet.

Boykin criticized Preckwinkle for depending too much on the federal aid and called the county’s guaranteed income pilot a “political stunt” because of its proximity to the elections — he also added that it’s just a carbon copy of Chicago’s universal basic income pilot.

“At the end of the day it is COVID-related money and it only helps a handful of people,” Boykin said of the program.”There are 5 million people in the county, and you are only helping around 3,000 people? First, we need to figure out how to help everybody.”

But Boykin himself has faced criticism for engaging in what some see as a political stunt over his involvement with Chicago mayoral candidate Willie Wilson’s multiple gas giveaways. Boykin often acts as Wilson’s spokesman and speaks at news conferences ahead of the mayoral candidate, but Boykin rejects any questions about their motives.

“You will always have people who are cynical,” Boykin said. “Dr. Willie Wilson has been doing this type of giving back for the last 30 to 40 years, and if it were political why is it that at the beginning of the giveaways [Wilson] said no one can hand out political paraphernalia?”

But Boykin’s campaign has undoubtedly benefited from his role in the giveaways.

Some participating gas stations have donated thousands of dollars to Boykin’s campaign — which he makes no apologies for.

“There were over 60 gas stations, and I wish all of them would have contributed, but in reality, I think only 13 of the 60 did,” Boykin said. “It wasn’t a requirement, I didn’t talk to people about me running.”

The former commissioner has been an ally of gas station owners for some time, specifically when he was part of the Can the Tax coalition. The group was instrumental in repeating the Preckwinkle-backed sweetened beverage tax which levied a penny-per-ounce tax on sodas and sweetened beverages.

Boykin said service stations remember his role in “fighting against the pop tax” and “it still resonates with them.” That role of him being a champion of the pump will go further if he is elected as president.

“The answer to helping people right now with inflation and high gas prices is to suspend those gas taxes immediately,” Boykin said. “I will be looking at a way for us to help by freezing [gas tax] for 30 to 60 days.” 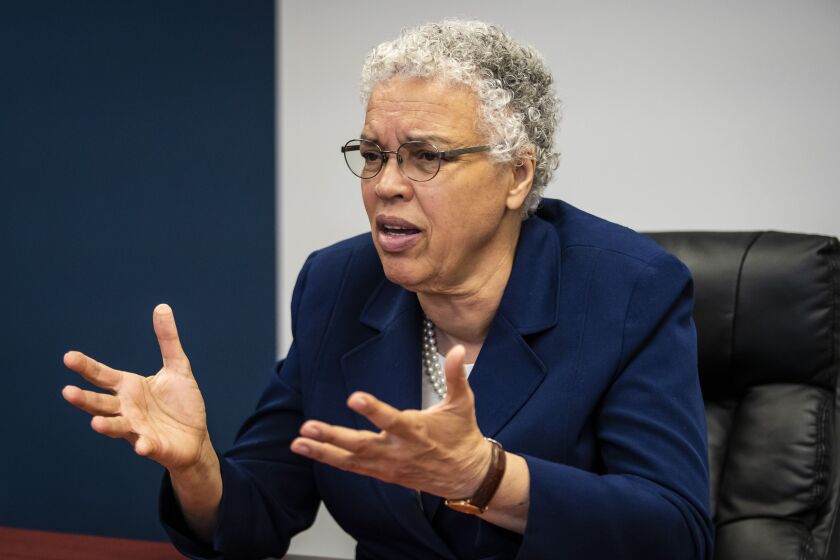 Cook County Board President Toni Preckwinkle sits down for an interview with the Chicago Sun-Times last week.

Boykin said one of his primary objectives will be to set up public safety meetings with local municipalities. It’s imperative, he said, that the county play a larger role in curtailing crime.

“I don’t see a plan to address or deal with gun violence or any of the root causes,” Boykin said. “It’s the opposite, she wants to let people out of jail, especially people who are charged with fun offenses.”

Preckwinkle said she has worked to address the violence but noted that the county is downstream of the criminal justice system. People are arrested in local communities by local police forces then the county detains them in jail before they’re tried in the courts. “We said let’s go upstream, let’s try and keep people out of the criminal justice system instead of just receiving them in our detention facilities,” Preckwinkle said.

Since 2013, the county has taken this approach, helping fund community-based organizations working in violence prevention, anti-recidivism programs and restorative justice.

“This year we are going to spend $60 million on those efforts, but we didn’t start off paying $60 million it has gradually increased year over year,” Preckwinkle said.

Whoever wins the Democratic primary must still run in the November election. So far no Republicans have filed to run, but River Forest resident Thea Tsatsos is running as a Libertarian.

Kansas woman who became ISIS leader to be sentenced

Chicago Police Must Allow Those Arrested Access to a Phone Within 3 Hours: Consent…

COVID-19 update as of Sept. 29, both Evanston and Cook County are in the…