As frontline workers continue to examine solutions to senseless homicides, gun violence and other crimes in African American communities, one activist provides a safety net for people coming out of the criminal justice system so they have fewer reasons to return. The shepherd of One Church One Inmate (OCOI), with locations on the South and West sides of the city, says he longs for the day initiatives like his are no longer needed.

The United States continues to have the highest incarceration rate in the world with an estimated 25 percent of the global population (2.19 million prisoners) behind bars. US Bureau of Prisons statistics indicates that 1.38 million individuals are in federal and state prison and about 745,000 people are in local jails.

According to the Illinois Department of Corrections (IDOC), nearly 30,000 people, most of whom are African American, are currently incarcerated in state prison facilities. Statistics offered by the Cook County Sheriff’s Office says 8,404 people are in their custody (either in jail or under supervision).

Such large numbers of people engaged in the criminal justice system is why programs such as OCOI are needed to reduce recidivism and offer inmates pathways to success, organizers say.

Today, the 33-year-old program, located at 7500 S. Ashland Ave., thrives under the leadership of Reverend DeOtis Taylor. A former case manager, investigator, and court officer at Cook County Jail, he has organized hundreds of churches to give a lifeline and hope to people often shunned by broader society. 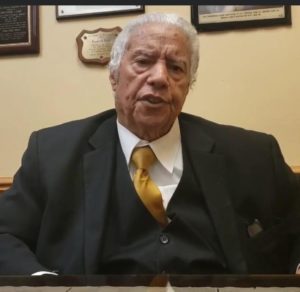 OCOI was the brainchild of Spencer Leak, who as executive director of the Cook County Department of Corrections, which oversaw Cook County Jail, created the program to fight recidivism. The well-regarded mortician, philanthropist and civil rights leader believed at the time that matching incarcerated individuals with faith-communities was a key to closing the door behind those getting out of jail.

“I got five calls today,” Taylor said at the time of the interview. “People need legal addresses, food and some place to live. My phone doesn’t stop ringing. Our program takes a lot of stress off of people getting out—we match them with churches and programs before they are released. We do our best with the limited resources we have to help people out. This is our community, who else is going to help them?”

Illinois spends about $37,000 annually per inmate. Those costs cover all aspects of life for inmates including food, security, utility costs, recreational activities, educational opportunities, infrastructure maintenance, and health care. By contrast, the Chicago Public School district spends roughly $16,418 per year on each student. Cook County, which is predominantly Black, is responsible for about 60 percent of the state’s incarceration rate.

One Church One Inmate is just one of many community-based programs designed around restorative justice and forgiveness. Taylor said all churches need to participate is a willingness to serve and patience.

“Healing takes time,” he said. “Some of these people have substance abuse or mental health problems. Others have been traumatized all of their lives. The church can be a place of comfort and correction for many of them.”

Citing his experience, the pastor said he worked with such notables as (former) Cook County State’s Attorney Cecil Partee, (former) 1st District Congressman Charlie Hayes and (former) Justice Eugene Pincham in the early days of his involvement with the program. “Pincham is the one who encouraged me to keep on doing it,” he said, noting he served as the judge’s courtroom hearing officer for a period.

The minister also talked about his work in the Ida B. Wells housing project with gang members.

“I worked with gangbangers, 5120 on State Street, saved a lot of them. A lot went back, but I saved a lot of them. Back in the day I worked with those people. I’ve been doing this practically all of my life. It’s now my time to turn it around. All we need now is a grant writer. “When I die, I want to leave something behind, that I tried to help someone along the way.

“I work with all kinds of preachers on the South and West sides,” Taylor told the Crusader. “If they have a kid or person in their church who gets in trouble, we help the church work with those people after they’ve been in contact with the criminal justice system or have been in a juvenile facility.

“When they get out of prison most of the people come and see me,” he said, “and the number one problem they have is where they are going to live and how they will be able to find work. We look for landlords and places that are open to people with arrest records.

Once we help get folk stabilized, we then work on character building through our faith-based approach. Some of these folks have done some serious time and really need help integrating back into society.”

According to legal watchdog publication Law 360, “the majority of long sentences are for violent offenses including murder, rape and sexual assault,” but individuals also received “long sentences for drug possession, distribution and trafficking, property crimes, and public order violations, such as weapons offenses and driving under the influence.”

Elected officials agreed with Taylor that access to housing is a critical issue impacting citizens returning to society. In 2019, the Cook County Board of Commissioners passed the Just Housing amendment that barred landlords and real estate agencies from discriminating against returning citizens and people with arrest records, including those that were expunged or acquired as a juvenile. The effort was led by Commissioner Brandon Johnson of the 1st District which covers the West Side.

“I was proud to be the chief sponsor of an ordinance with the sole purpose of ending discrimination against families and returning citizens who have been plagued and haunted by the vestiges of Jim Crow,” Johnson said.

“In the 1st District alone, nearly 80 percent of the women who return from the penal system are mothers. And one of the greatest challenges that our families have to securing the type of dignity that they deserve is an opportunity to secure housing.”

Taylor applauded the legislation but said more needed to be done to ensure people can survive after serving time. “We need people to partner with us to help identify employment, counseling and other opportunities that build a safety net up under people,” he said.

“We are seeing more and more women coming to the system and winding up back on the street with little to no skills, no place to go, and no way to support themselves. We partner the females with female church leaders and programs specific to the needs of women. Some of them just want help reconnecting with their children.”

Hailed as one of the first such programs of its kind in the US, OCOI has about 300 member churches, according to Taylor and is active throughout the state. Before he became a full-time pastor he worked in the criminal justice system and saw firsthand the impact incarceration has on both the individual and the communities they come from.

“I worked at juvenile for five or six years as an outreach manager (at 26th and California). I had to go out in the field where I’d take someone from the courthouse who had to be locked [up] and things like that. I had a heavy caseload of 219 people I had to see each month. Sometimes I had more than that,” he said.

“They reported to me every month, and I had to know if they were working where they lived, if they moved, if they were using drugs or drinking so when they went before the judge the court would have a clear understanding on whether or not not this person was trying to turn their life around. I saw a need to counsel people and help them along the way. That’s why I got involved with One Church One Inmate.

“I hope a time comes when we don’t need it anymore,” he told the Crusader. “I hope I live to see it.”

This report is supported in part by the Inland Press Foundation.

Report Seeks To ‘Unlock the Vote’ In American Jails