The Barrington native and projected borderline first-round pick in this year’s draft wasn’t disappointed. One team asked him, “What animal would you be, and why?”

“I said a panther,” Hutson said, laughing at the absurdity. “Because they can be a little bit sneaky, and they can attack, too.”

The comparison is apt. Hutson’s small size — 5-8, 160 pounds — and elite offensive instincts as a defenseman make him one of the more intriguing players in the draft class.

A standout for the US National Team Development Program this past season, Hutson is headed to Boston University in the fall, but first, he’ll travel to Montreal for the draft Thursday and Friday as the 25th-ranked North American skater in the Central Scouting Service’s final rankings. He already received the EJ McGuire Award as the prospect who “best exemplifies commitment to excellence through strength of character, competitiveness and athleticism.”

And he headlines a potentially impressive class of hockey players from the Chicago area. Five locals made the final CSS North American skater rankings, three of whom are expected to go in the first half of the draft. Jack Devine, a forward from Glencoe entering his sophomore year at Denver, is ranked 65th. Brennan Ali, another forward from Glencoe headed to Notre Dame, is ranked 83rd — and opened eyes with great results in several fitness categories at the combine. Aiden Dubinsky, a defenseman from Highland Park headed to Minnesota-Duluth, is ranked 176th. And Davis Burnside, a forward from La Grange headed to Ohio State, is ranked 199th.

This comes after two Chicago-area natives were drafted last year. Defenseman Sean Behrens of Barrington went to the Avalanche in the second round, and forward Josh Lopina of Minooka went to the Ducks in the fourth.

Historically, a defenseman of Hutson’s size would face serious skepticism from NHL scouts and never sniff the first or second round. But the sport and the league are changing, and the success of 5-9 defensemen such as the Blues’ Torey Krug and the Wild’s Jared Spurgeon has created opportunities for prospects like Hutson.

Plus, what Hutson lacks in size, he easily makes up for in other ways. Regarded as one of the smartest and most mentally NHL-ready players in the class, he reads situations so quickly that he often doesn’t even need to battle anyone for the puck.

“I’ve always been able to see the next play in the offensive zone,” he said. “I have an ability to shift around guys, make a play that maybe some guys can’t see . . . and create space for myself. But it helps in all areas of the ice. In the ‘D’-zone, if I need to make a play out of the corner if I’m getting pressured, I can shift in, shift out and pass the puck up the ice.”

Lane Hutson believes his 5-8 frame can actually be an advantage in the NHL.

He’s just as well-practiced at giving his personal sales pitch, surely repeated hundreds of times at the combine.

“I do things that some bigger defensemen can’t do,” he said. “[I can] move the puck quick, get the pucks quicker, transition pucks fast, keep the tempo of the game fast and put teams back on their heels.”

Hutson’s youth hockey career took off so early that he hasn’t played in Illinois since he was a 13-year-old in 2017-18; he spent a year in Michigan, a year in New Jersey and the last two years with the USNTDP back in Michigan.

Nonetheless, he still calls Barrington home and trains there during the summers, including this one. He grew up a fan of the Blackhawks, particularly Patrick Kane, and “fell in love with the game” during their dynasty run — a familiar story among prospects coming out of Illinois in recent years.

The Hawks are an unlikely landing spot for him, though. He probably won’t be available by the time their first pick comes up at 38th overall, and they’re primarily targeting forwards regardless.

Hutson said he most enjoyed his combine interviews with the Maple Leafs, Canadiens and Kraken but is open to all outcomes.

“I’m not too nervous or concerned about it,” he said. “Whatever happens, happens. I’m just looking to continue growing my game.”

In 2020-21, Devine played with Hutson in the USNTDP, which he joined after playing for the Chicago Mission through his age-15 season. But this past season, Devine took advantage of his earlier birthday in October 2003 — Hutson was born in February 2004 — to play a full college season.

It turned out to be a wise decision. Devine, who’s on the smaller side himself at 5-11, 176, tallied 19 points in 36 games for Denver (alongside Behrens), then gained valuable experience during the Pioneers’ run to the NCAA championship.

“It was cool I was able to find a way to be an impact player on a championship team [as a freshman],” Devine said. “It’s super hard. It’s something that many people aren’t able to do in their lifetime. That’s experience I’ll be able to take with me the rest of my hockey career to hopefully the AHL, NHL and international hockey.” 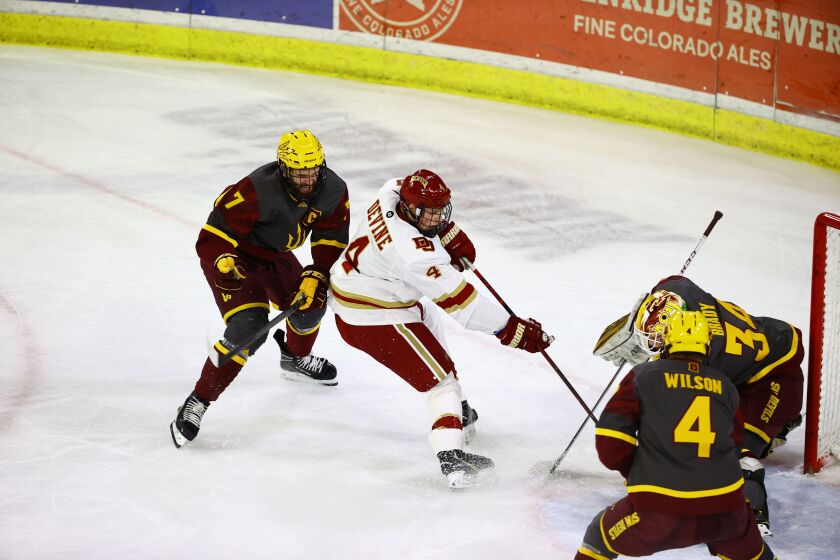 Jack Devine helped the University of Denver win the NCAA title this past season.

Devine’s most appealing attributes as an NHL prospect are similar to Hutson’s, despite the two playing different positions. He’s a smart, hard-working winger with excellent play-making abilities (16 of his 19 points were assists).

His skating has long been a weakness, but he has focused much of his training on improving it — specifically his acceleration — and expects to make a “big jump heading into next year.”

As a projected third-round draft pick — although he conceivably could go anywhere between the second and fourth rounds — Devine has a much higher chance of being on the Hawks’ radar.

The Hawks watched and interviewed him and his coaches throughout the season, he said.

Naperville Salute Back For the Second Year

How Does Elvis Andrus Fit With the White Sox? – NBC Chicago

No comeback this time vs. Houston Astros

KHN’s ‘What the Health?’: Wrapping Up Summer’s Health News