Workers at Intelligentsia Coffee have filed a petition for union elections with the National Labor Relations Board (NLRB), joining a still-growing wave of labor organizing among employees at coffee companies locally and across the US

Pro-union staff at Intelligentsia’s six city cafes and its Chicago Roasting Works warehouse in the West Loop submitted the petition in late May, calling for representation from Local 1220 of the International Brotherhood of Electrical Workers (IBEW) — the same union that now represents workers at Colectivo Coffee, the Wisconsin chain with five Chicago-area locations.

The intelligentsia workers have similar concerns as those at other organized coffee chains, including Starbucks and Colectivo, ranging from issues like wages, staffing, training, and scheduling to safety and health protections, says Local 1220 business manager John Rizzo. “It seems to be there’s a lot of universal issues within the coffee industry that [Intelligentsia workers] want to square away,” he says. “They’re treated as though they’re invisible — [customers] don’t care who you are behind the counter. It shouldn’t be that way with management, too.”

Warehouse employees are particularly concerned about the lack of air conditioning in their workspace as hot summer weather approaches, as well as the need for an air filtration system, Rizzo says. Such systems are necessary to mitigate the impact of diacetyl, a chemical compound that occurs naturally in unflavored coffee as a byproduct of the roasting process that scientific studies have linked to debilitating lung disease among those exposed for extended periods of time.

Founded in 1995, Intelligentsia Coffee opened its first cafe in Lakeview that same year. It has since added two cafes in the Loop, as well as outposts in Wicker Park and Logan Square. The brand is among the most popular and well-known specialty coffee roasters in the nation and has cultivated a reputation for rigorous standards among its baristas.

That industry stature was a key draw for 25-year-old barista Jordan Parshall, who moved to Chicago from Minnesota in 2020 and sought employment at Intelligentsia’s cafe in the Monadnock building in the Loop. He has now been working there for about a year. After a chance encounter with an IBEW member in October 2021, Parshall and his colleagues began to organize, inspired in large part by the hard-won union victory at Colectivo two months earlier. Between 40 and 50 Intelligentsia workers will be eligible for union representation, he says.

“You have to remember that almost everyone who works in food service lost our jobs in March 2020,” says Parshall. “When that happened, we realized that there’s nobody looking out for us. It’s important for there to be that union in place so they can be that person that has your back, that will fight for your job, benefits, and wages.” 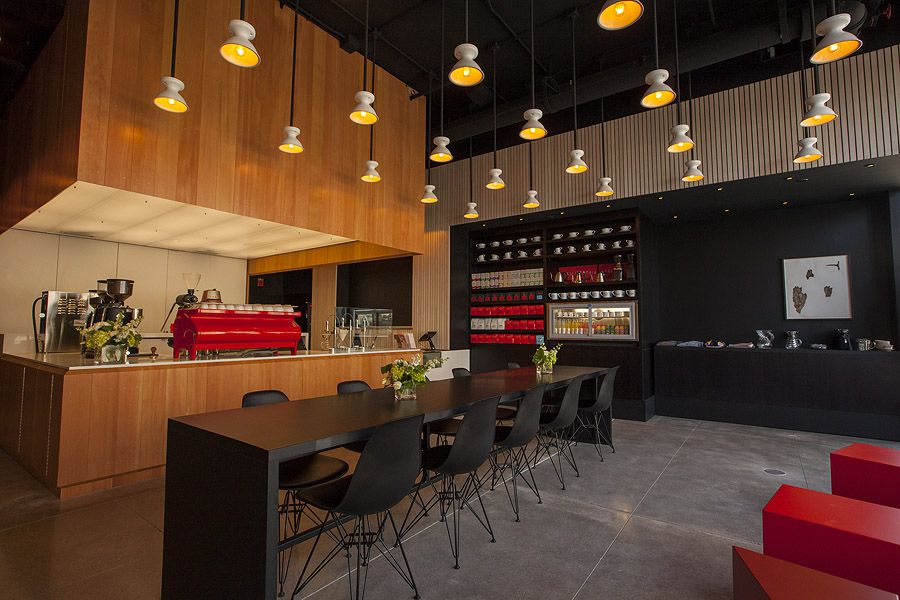 In 2013, the company launched a cafe in Wicker Park.Barry Brecheisen/Eater Chicago

An election date is not yet set, but if the company decides to object, the parties will attend an NLRB hearing on Monday, June 13, Rizzo says. An election date would then be set within 30 days of that hearing.

Intelligentsia reps have not responded to a request by Eater for a comment on the filing. Company president and CEO James McLaughlin wrote to workers on May 23 in an email reviewed by Eater that terms of employment would remain unchanged in the lead-up to the election, but stated that management “prefers to deal with you individually and directly rather than through an outside third party who knows little about our business and our operations.”

It remains to be seen if management will take the same approach as that seen at Colectivo, where the company leadership hired a “union avoidance” company, described by critics as union busters, in an effort to quash employee organizing efforts.

For Parshall’s part, he hopes management sees that the union campaign is born of the workers’ desire to improve Intelligentsia, not tear it down. “There are issues, but by and large we love working for Intelligentsia and have really bought into the mission, which is brewing the best coffee for the best places,” he says. “We think this is a way to not only make our lives easier as workers in the union, but also make our managers’s lives easier and make the company as a whole better off.”

‘An Arm and a Leg’: Good News for Your Credit Report