On the Grand Portage reservation, on the tip of Minnesota’s Arrowhead, Travis Novitsky likes to walk to a place where a gnarled, centuries-old tree grows seemingly straight out of the rock, perched on the Lake Superior shoreline.

It’s also called the Witch Tree. It’s a sacred place, where visitors must be accompanied by a Grand Portage band member.

A close-up of Travis Novitsky as he frames a photograph of the Little Spirit Cedar tree. Novitsky says it’s new to see more people interested in the craft but he’s happy to show the way.

“It’s a great spot just to sit and take in what’s going on around you,” Novitsky said, and one of his favorite places to pursue his passion — photographing the night sky.

It’s only about 7 o’clock at night, but it’s already intensely dark as Novitsky sets up his tripod and camera. Every few moments a quarter moon and a blanket of stars emerge from behind fleeting clouds.

“Sitting on the shoreline of a lake, seeing the stars reflected in the water, is an experience unlike anything else,” said Novitsky.

Before you keep reading, take a moment to donate to MPR News. Your financial support ensures that factual and trusted news and context remain accessible to all.

“Throughout day-to-day life, which can be pretty hectic sometimes, it can be hard to kind of quiet your mind,” he said. “And coming out to these places, whether I’m taking photos or not, is just that way for me to kind of slow down, take a breath, just be in that moment and appreciate it. You know, just you and the sky, you and the stars.”

And increasingly, more people are venturing to the North Shore to share in that experience, at a time when dark skies elsewhere in Minnesota and around the country are diminishing. 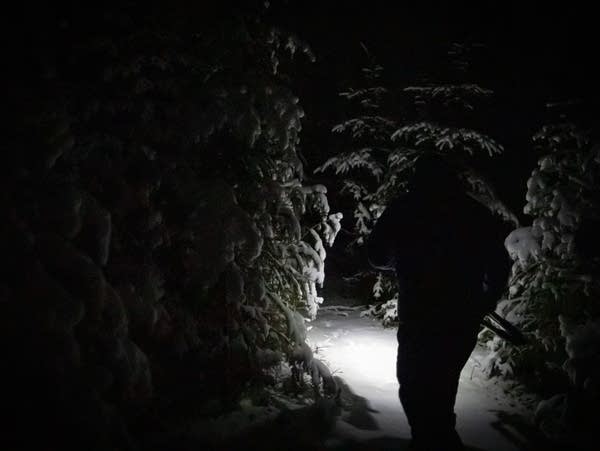 Landscape photographer Travis Novitsky hikes through fresh snow on his way to photograph the North Shore of Lake Superior.

Tourism officials in Cook County are trying to take advantage of that increased interest from so-called “astrotourists.” About five years ago they published an online map of good places for visitors to view the Northern Lights, along with nighttime photography tips.

And they launched the Dark Sky Festival — held near the darkest time of year — after the busy summer tourism season, but before winter activities are in full swing.

This year it includes presentations by a NASA official, other talks, night sky walks and telescope viewings. There are also screenings of a new documentary co-produced by Novitsky called “Northern Lights, Starry Skies.” 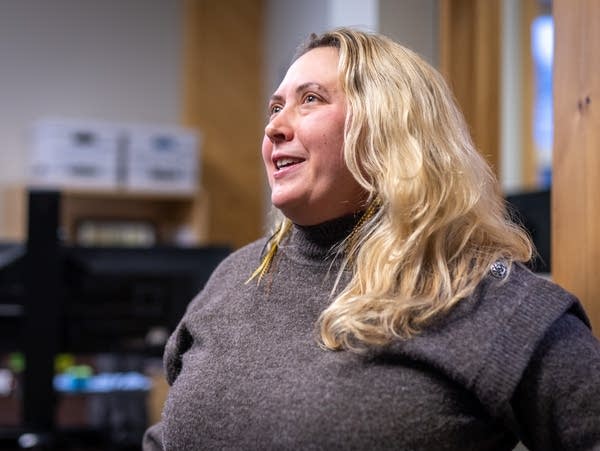 Visit Cook County marketing and public relations director Kjersti Vick chats with MPR News reporter Dan Kraker during an interview in Grand Marais, Minn. on Nov. 30.She says that the time of the year that is the darkest really is a treat for night sky watchers.

“It’s a celebration of that dark period of year, when you have extended hours of looking at the night sky,” said Kjersti Vick with Visit Cook County.

Vick first realized the enormous appeal of the region’s dark skies when she was sitting around a campfire a few years ago with some out-of-town friends, when they suddenly grew very quiet.

“They were all just staring at the sky,” Vick recalled. “And they’re like, ‘are there always these many stars in the sky?’ And it was kind of eye opening for me, for somebody who grew up in this area and always saw this many stars in the sky, that not everybody gets to experience this.”

Scientists estimate 99 percent of the continental US and Europe now experiences some kind of light pollution. Nearly 80 percent of North Americans can’t see the Milky Way where they live.

And it’s getting worse, said Caroline Torkildson, a dark skies advocate in Cook County and board member of Starry Skies North, a statewide chapter of the International Dark Skies Association.

“So these dark places are more and more special. And when I go out, and I look at the dark skies, I just have this sense of wonder, that we don’t want to lose this,” she said.

That makes places like northeastern Minnesota an increasingly appealing destination for dark sky tourists, especially in the winter, when dark descends early, and the dry air creates clear conditions for star gazing.

“There’s nothing like a 10-below night with the Milky Way up above you, and just sitting there soaking in everything you can see when your eyes are totally adjusted. It’s pretty phenomenal,” said John Fredrikson, co-owner of Gunflint Lodge and Outfitters, which offers presentations on the Northern Lights and guided nighttime hikes for guests.

He said interest has grown since the Boundary Waters Canoe Area was recently designated an International Dark Sky Sanctuary — one of only 16 in the world. 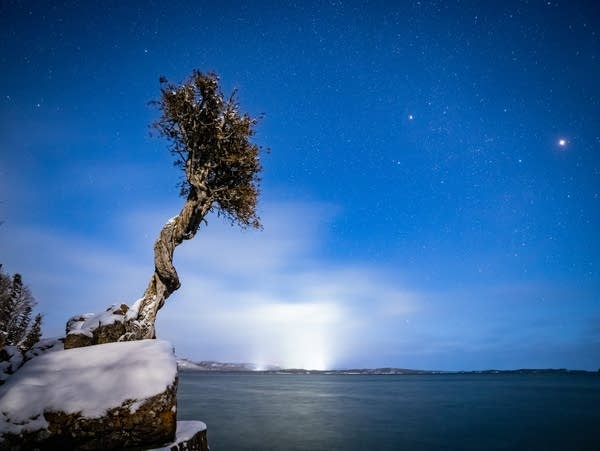 The Spirit Tree, known as “Manido Gizhigans” in Ojibwe, is seen on Lake Superior’s North Shore on the Grand Portage Indian Reservation on Wednesday on Nov. 30.

Nearby, Voyageurs National Park and Quetico Provincial Park have also been recognized by the International Dark Skies Association for their protected dark spaces.

Together, they make up one of the darkest regions in the lower 48 states east of the Mississippi River, and a hotspot for “Aurora hunters” in search of the Northern Lights.

“It’s something that people are perpetually chasing,” said Visit Cook County’s Vick, who compared seeing the Northern Lights to spotting a moose. You know they’re out there, but sometimes they can be hard to spot.

“But when you see it for the first time, it’s like, ‘oh my gosh, this just happened in front of my eyes.’ It’s incredible. And so it is something that is on bucket lists for a good reason. It’s magical and amazing.”

“Astrotourism actually benefited because there is no better activity for getting out and getting away from people than stargazing,” she said. “And so there was a ton of increased interest in finding stargazing spots and going to national parks for night sky activities.”

Photographer Travis Novitsky sees that increased interest firsthand along the North Shore. There are nights he’ll pull up to a favorite spot that he used to have all to himself. Now, there might be another half dozen cars there. 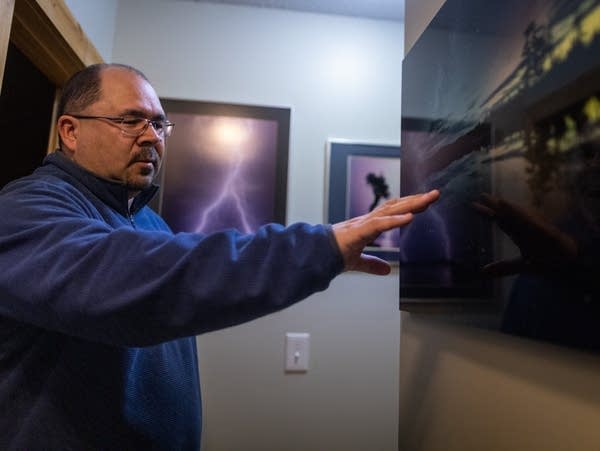 Landscape photographer Travis Novitsky describes one of his favorite photos of the aurora borealis hanging in his home on the Grand Portage Indian Reservation in northern Minnesota on on Nov. 30.

And he struggles with that. He knows some of those people are probably there because of him, and all the photographs he’s taken over the years of the night sky, and the Northern Lights.

“The more people that come to experience that makes it harder to continue to get the same experiences that I’m used to, and why I love it.”

But he’s an astrotourist himself, he acknowledges. He travels regularly to the American southwest, a hotspot for dark skies devotees.

He said while it can sometimes be frustrating to lose that solitude, he said it’s also rewarding to share these spaces with other people.

“Because I know that those folks are there because they want to experience a piece of what I experience. That amazement, that wonder and that appreciation.” 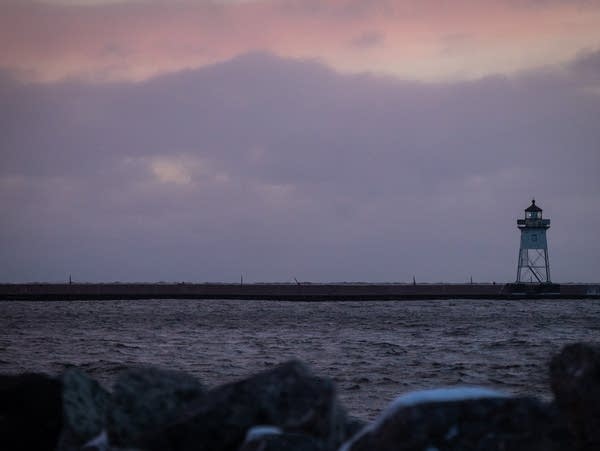 The Grand Marais Lighthouse is seen at sunset on Nov 30.

For Patients With Sickle Cell Disease, Fertility Care Is About Reproductive Justice