On the morning of June 24, I received a call no one should ever get. My younger sister, Mia, was crying and screaming into the phone: “Christian is gone.”

“Wait, what do you mean?” I responded, stunned. That’s when Mia said he was killed.

In that moment, my heart stopped, disbelief set in, and I began peppering her with questions. “Who told you that, Mia? How do they know? Was this confirmed by the police or a hospital? Where did this take place?”

I began to cry as we learned of the Chicago hospital he was taken to. The hospital wouldn’t give me any information so I called elected officials in the city, asking them to make a call on my behalf. One did, leading to confirmation that my brother had been pronounced dead at Christ Hospital.

Calls from family members began pouring in. How could this have happened? And to Christian of all people? He had just turned 18.

Caldwell, pictured with his family, is now on a justice crusade for his brother.

I was not only Christian’s older brother but a father figure to him. I have been told that one of his life goals was to make me proud and be successful, in his words, like his big brother.

The police informed me Christian wasn’t the intended target of the shooting. He was standing outside 11400 South Vincennes Ave. on a Friday morning when a black SUV pulled up. Three or four African-American men with dreads jumped out and began firing. Police counted 50 shell casings on the ground, and believe there were two shooters.

The evening news described what happened: a shooting in the Morgan Park area, three people shot, an 18-year-old pronounced dead. Christian was simply one more murdered kid in Chicago. No name, no picture, just another Friday evening news package.

Overwhelmed by grief, I wondered when I should personally make this news public. That weekend? The coming Monday? Or maybe not tell people for some time? Then it hit me: The people who murdered my little brother were still out there. If I didn’t make his death public sooner, the killers might evade capture.

I tossed, turned, and cried all night. Then I got up Saturday morning writing words I could never have anticipated: “Devastating news: Yesterday was legitimately the worst day of my existence. I received a call informing me that my teenage baby brother Christian was murdered on the south side of Chicago yesterday morning. After all the things my family has been through, never could I have imagined my baby brother’s life would be stolen from him. Please keep my family in your prayers.”

Soon afterward, Fox News, the network I work for, published an article on the murder of my brother, and the public became aware of his life and legacy. Then my fight for justice began.

Christian was a good young man. He was looking forward to attending college. He was always the light of the room and would make everyone laugh even on their down days. I didn’t just lose a brother or someone who was like a son, but the entire world lost his potential to make the world a better place.

Living in Chicago comes with a death sentence for too many. The police said my brother was at the wrong place at the wrong time, but my question is, where is it safe in Chicago?

Just recently, a 5-month-old was murdered while riding in the back seat of a car. Was that baby at the wrong place at the wrong time? 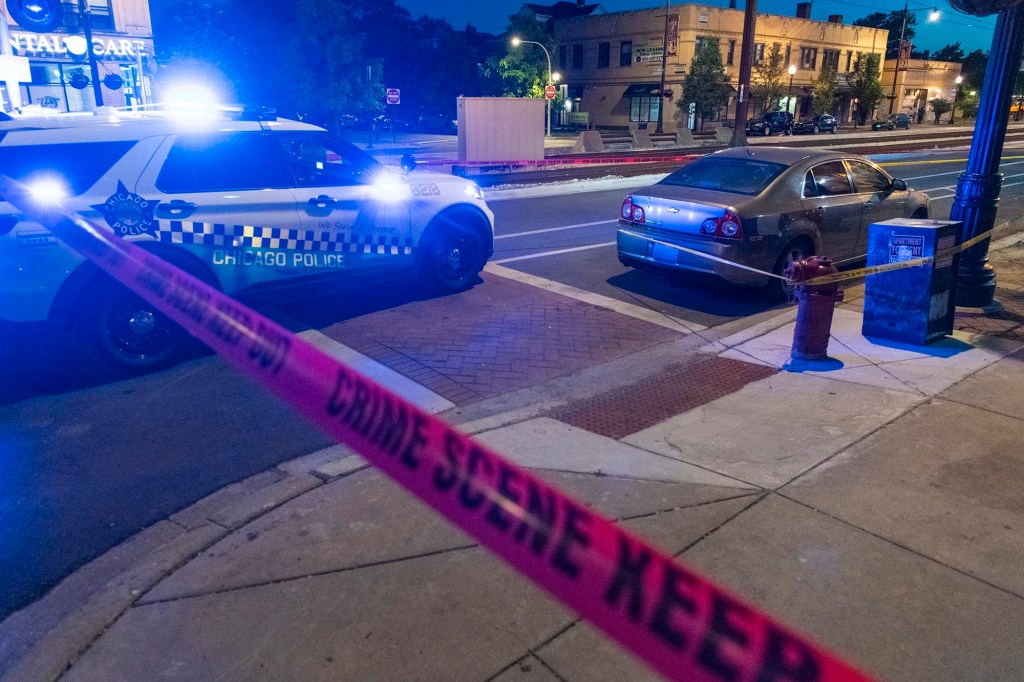 Caldwell describes life in Chicago as a “death sentence” for many people.AP

Murder in Chicago has become an expectation, not a rarity.

Other cities also saw an increase in the number of homicides. But Chicago, as it has in previous years, ended 2021 with more homicides than any other city in the country, including New York and Los Angeles, which have much larger populations.

People continue to ask me what’s causing this insane surge in crime and violence. There are many reasons. It’s not simply a leadership problem with the mayor and county prosecutor. It’s also a policy problem, a demoralized police department problem, and an erosion of the value placed on human life in Chicago.

I can tell you that criminals love the policy shift that’s taken place over the years in Chicago, where leaders have mistaken necessary criminal justice reform with soft-on-crime policies that are endangering the lives of residents from every neighborhood and demographic.

For example, Chicago now has a policy mandating the police call their supervisor before chasing a suspect in their car. In other words, a person could commit an egregious crime and potentially get away with it because an officer has to reach a boss on the phone first. There’s also a new foot-pursuit policy in place that prevents officers from chasing suspects in many situations.

Bail reform is another soft-on-crime policy. I understand the argument for eliminating cash bail for some petty crimes such as turnstyle jumping. A person could be locked up for a month and cost taxpayers thousands of dollars for not paying $3 for a train ticket.

But why the hell are judges releasing criminals who commit heinous crimes back on the street? Why does anyone think that will make our communities safer?

Bail reform started in the Chicago area in 2017 through Cook County Circuit Court Chief Judge Timothy Evans, who required that judges not mandate cash bail unless a strong reason existed to do so. The move aimed to reduce the number of offenders who were being held only because they couldn’t afford to get out.

However, Cook County’s controversial limits on the use of cash bail ended up causing more crime on the streets of Chicago and resulted in fewer defendants showing up in court, according to a report from last year.

To make matters worse, violent offenders accused of horrific crimes are often part of the Cook County sheriff’s ankle-monitoring program, which is the largest in the nation and is billed as an alternative to incarceration. More than 75% of those being electronically monitored face violent-crime charges, including about 100 murder suspects, according to another report.

This is egregious. You can literally be charged with murder and still be at home to plot the murder of a witness while wearing an ankle bracelet.

These policies must come to an end.

“Criminal justice reform has backfired on society at large,” said Tio Hardiman, president of Violence Interrupters, a non-profit. “Politicians passed sweeping criminal justice policies due to issues with excessive force by the hands of a small percentage of police, but lawmakers did not include the protection of the everyday victims of crime in our nation.”

Hardiman is absolutely correct. The criminals have been coddled, and this has created more victims of crime — like my brother.

This Sunday, July 24, marks one month since Christian was murdered. Since that horrific day, it has been four weeks straight from the pits of hell for my family and me. Christian’s killing was a very high-profile murder — yet it’s been a real challenge to get justice. There has been no arrest in the case, despite all the coverage and media attention.

I know how tough it is for the everyday Chicagoan who’s fighting to get justice for a murdered loved one. Police and residents have become desensitized to the culture of murder that exists in my hometown. I am turning my pain into purpose to be the voice for the voiceless in the city of Chicago. I will be working with both local and national leaders to reverse many of these soft-on-crime policies that I believe led to the murder of my baby brother Christian. The fight for justice continues. Please keep my family in your prayers.

Gianno Caldwell is a political analyst for Fox News.

How Does Elvis Andrus Fit With the White Sox? – NBC Chicago