In 2007, John Galvan was about 21 years into a life sentence for a crime he didn’t commit when he saw something on the prison television he thought might finally help him prove his innocence and secure his freedom: A re-run of an episode of the Discovery Channel’s MythBusters.

The episode, “Hollywood on Trial,” which originally aired in 2005, sees the show’s hosts Jamie Hyneman and Adam Savage attempt to reproduce famous scenes and commonly used plot devices from Hollywood films with the goal of ascertaining their scientific validity. The pair and their team investigate whether a person can break down a door with four types of locks, whether a sinking ship — like the Titanic — can actually create a whirlpool, and whether a lit cigarette can really ignite a pool of gasoline.

It was the last of these questions that caught Mr. Galvan’s interest.

In September 1986, a fire broke out in a two-flat apartment building in Southwest Chicago, killing brothers Guadalupe and Julio Martinez. Their siblings Blanca and Jorge managed to escape the fire and told police that a female neighbor had threatened to burn the building down as retaliation for her own brother’s death. The woman believed her brother had been killed by the street gang Latin Kings, of which Jorge may have been a member.

When the police questioned the woman, she denied any involvement and instead pointed to Mr Galvan. Police also interviewed neighbors in the area, including Jose Ramirez and Rene Rodriguez, who alleged that Mr Galvan, his brother, and the brother of Arthur Almendarez (Mr Galvin’s neighbor) had been involved in starting the fire.

Although Mr. Galvan had been asleep at his grandmother’s the night of the fire and no other evidence indicated his involvement in the fire, the police ultimately arrested him and his brother, as well as Mr. Almendarez and his brother.

Detective Victor Switski, who led the interrogation, handcuffed Mr. Galvan to a wall and proceeded to interrogate and intimidate him for hours, pressing the 18-year-old to implicate others in the crime in order for him to return home. Deceptive tactics — like offering leniency in exchange for a confession or falsely telling children they can go home if they confess — have been identified as risk factors for false confessions, and young people are especially vulnerable to falsely confessing as a result of these tactics.

Deception in interrogations of youth remains legal in 46 states. 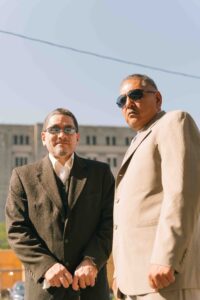 John Galvan and his co-defendant Arthur Almendarez, who is represented by Joshua Tepfer of the Exoneration Project, after their exoneration on July 21, 2022. (Image: Ray Abercrombie/Innocence Project)

When Mr. Galvan asserted his innocence, Detective Switski beat him, Mr. Galvan said. Through the walls, his older brother Isaac listened helplessly to the detective’s yelling and John’s cries. Since then, several other people have been tested to be tortured by Detective Switski and the other detectives who coerced confessions from John and Mr. Almendarez. Detective Switski also threatened John, telling him he would face the death penalty and end up “laying next to” his late father. Eventually, John couldn’t take it anymore and agreed to give a confession that was completely fabricated by the detectives to end the abuse.

The statement claimed that John, Mr. Almendarez, and Francisco Nanez (Mr. Almendarez’s brother-in-law) had started the fire by throwing a bottle filled with gasoline at the building and then tossing a cigarette into the pool of gasoline on the porch to ignore it.

John, Mr. Almendarez, and Mr. Nanez — 18, 20, and 22, respectively at the time — were all convicted and sentenced to life in prison without parole.

Hope sparked by a rerun

“There it was,” John recalled thinking. “Once I saw it, I couldn’t wait to tell Tara,” he said, referring to his attorney Tara Thompson, who, at the time, had just taken on John’s case at the Exoneration Project at the University of Chicago Law School. She continued to represent John when she joined the Innocence Project in 2021. John was also later represented by the Exoneration Project’s Joshua Tepfer, who also later represented Mr. Almendarez. 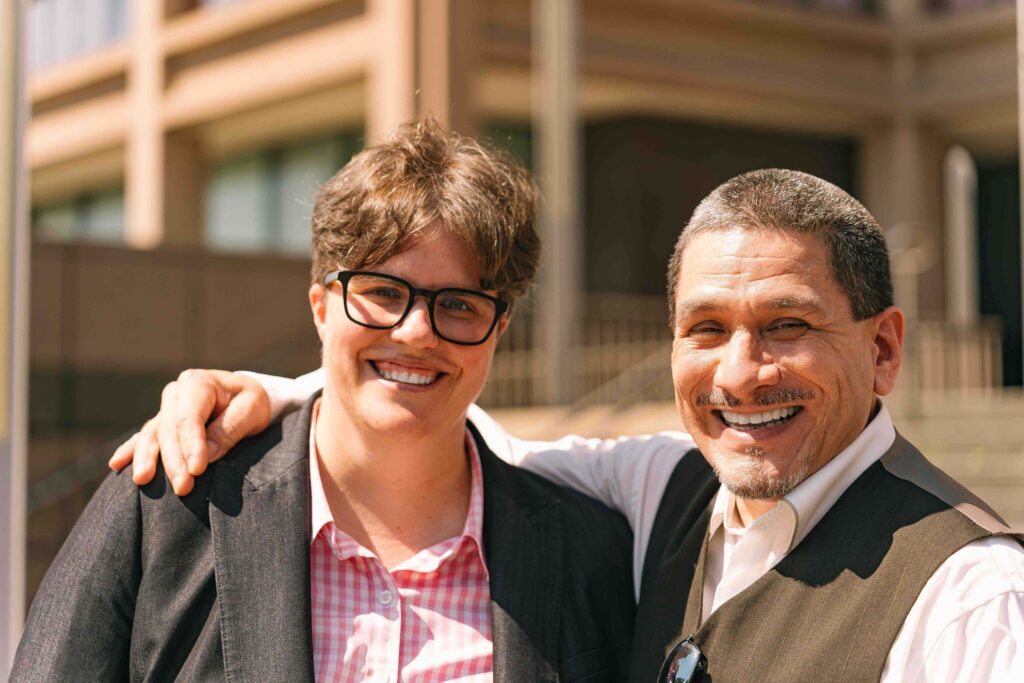 John Galvan with Innocence Project staff attorney Tara Thompson, one of his attorneys, after his exoneration on July 21, 2022. (Image: Ray Abercrombie/Innocence Project)

“It was honestly shocking to me … I feel like all of us have seen movies — like Payback is a famous one — where they light the gasoline in the street with a cigarette and a car explodes, and I really had never given much thought to whether or not that might be real,” she said. “When I watched this Mythbusters episode, as a lawyer, it made me realize that there are things you have to look deeper into — you can’t assume that you understand the science until you’ve looked into it.”

After talking to John, Ms. Thompson realized that they needed to investigate the arson science aspect of his case further.

Science vs. the law

The show’s findings were confirmed in 2007, by experiments conducted by the US Bureau of Alcohol, Tobacco, Firearms, and Explosives (ATF), which made more than 2,000 attempts to ignite gasoline with a cigarette under various conditions. The bureau’s experiments even included a vacuum that increased the cigarette’s temperature to the level it would typically reach when being sucked and spraying a mist of gasoline directly onto the lit cigarette. All of the attempts failed.

“Despite what you see in action movies, dropping a lit cigarette on to a trail of gasoline won’t ignite it, assuming normal oxygen levels and no unusual circumstances,” said Richard Tontarskia forensic scientist and then chief of the ATF’s fire research laboratory.

“Even then, they really did not want to accept that this was not possible,” Ms. Thompson recalled. “I feel like that is the battle that we’re still fighting about science [in the courtroom]. Even though this is not really a disputed issue in arson science anymore, the prosecutor really wanted there to be a possibility that this could happen,” despite the expert’s testimony to the contrary.

“I find that very telling about the state of science and the law … that these things that we probably should accept as true in the legal space, the system does not always want to accept,” she added.

Sciences are always evolving, but, unfortunately, laws do not always keep pace with innovations and discoveries. However, states can pass change-in-science laws to create mechanisms that allow people convicted based on now debunked or discredited forensic methods to have their cases reviewed.

“Mr. Galvan’s case speaks to the critical importance of establishing such mechanisms for people to get back into court when science changes or evolves, or when experts repudiate past testimony,” said Rebecca Brown, Innocence Project director of policy. “Without these mechanisms in many instances, innocent people are prevented from presenting forensic evidence of their innocence after their wrongful conviction.”

Two decades of fire research has debunked methods that were used to convict people of arson in the past — including the kind of faulty arson science used in John’s case. In 1992, the National Fire Protection Association released a consensus report that noted that many of the physical “signs” and characteristics previously thought to occur only in intentional fires could actually occur in accidental fires as well. The scientific community only began to widely accept this standard in the early 2000s.

“A ‘change-in-science’ statute here would have allowed for a presentation reflecting those changes in arson science and could have likely expedited Mr. Galvan’s exoneration,” said Ms. Brown.

In 2019, the appellate court granted John post-conviction relief on the grounds of actual innocence — a rarity in Illinois — largely based on the abuse used to coerce a false confession from John. The court concluded that without John’s false confession, which he did not give voluntarily, “the State’s case was nonexistent.”

Although John, Mr Almendarez, and Mr Nanez were granted new trials, but soon after, a judge later decided that they would only receive a suppression hearing — which would allow them to motion to suppress their false confessions — instead of granting them a new trial. At that hearing, their motions were denied.

“I don’t know where I’m supposed to be…”

Finally, in 2022, after new appeals, John and Mr. Almendarez had vacated their convictions and were granted new trials that prosecutors later decided not to pursue. On July 21, Mr. Nanez’s conviction was also vacated and that same day — after a combined 105 years in prison for crimes they didn’t commit — all three men were exonerated when the Office of the Cook County State’s Attorney’s Office dismissed their cases.

For the last two months, John has been adjusting to freedom and life as an adult outside prison walls. While he is glad to be free, he didn’t sugarcoat the difficulties that have come with the massive changes to which he’s been adapting. During his 35 years of wrongful incarceration, the world moved at a rapid pace. John lost touch with friends and family members, some of whom passed away while he was in prison. And technology has evolved dramatically over the past three decades.

But bit by bit, John’s been finding his footing. He’s most looking forward to having his own space to call home and getting back to drawing and painting.