So says Dan Weiss, owner of the Chicago-based Dollop Coffee Company, which opened the first general store in its 15-location chain on Saturday. The others are coffee and pastry shops.

The Dollop General Store and Cafe is located the ground floor of the Albion apartment building at 1500 Sherman Ave.

You can get everything from craft beer to Kraft macaroni and cheese. There are upscale brands as well as boxes of Cheerios, board games, COVID tests, plus fresh fruit and vegetables. 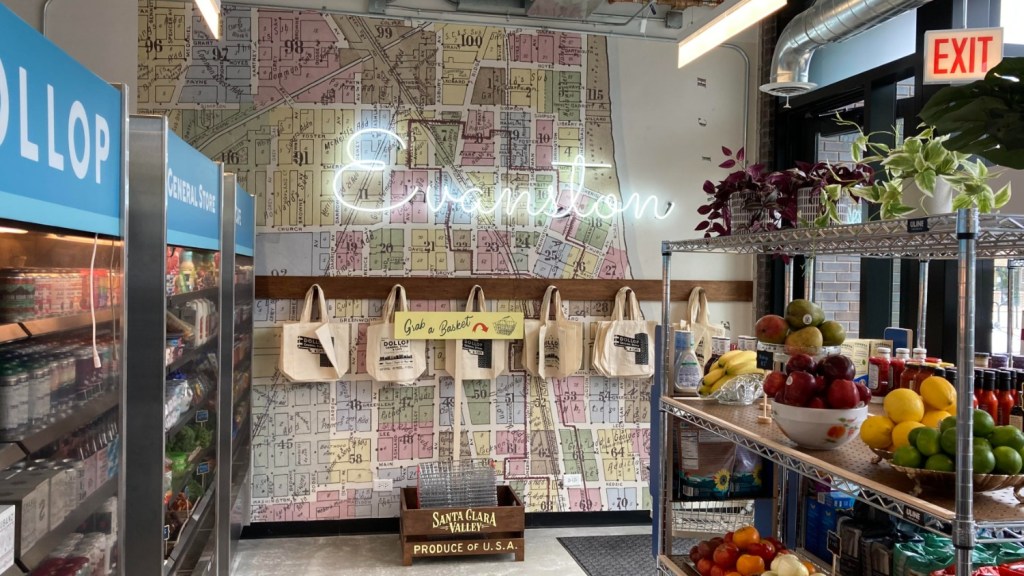 And, of course, there is the core of the business, coffee roasted by Dollop, and sandwiches on bread they bake, for dine-in or to go.

It’s sort of a combination of eats and treats, a place to buy something you need for the house without having to navigate a larger store, or somewhere to sit down for lunch. There is the familiar and the new.

“You can get a bag of Doritos,” Weiss says, “but also chips you’ve never heard of.”

Weiss is a graduate of Roycemore School, which is just a few blocks away from the general store.

“I was a coffee shop bum,” he adds, someone who always hung out at such stores.

“I love Evanston,” Weiss says, “and I’ve always wanted to do our own thing here.”

Weiss purchased what was then a single Dollop store in Chicago in 2011, and has grown the business since. There is another Evanston location, a joint venture with Hoosier Mama Pie Company, in the 700 block of Chicago Avenue. The rest, besides the new general store, are in Chicago and Oak Park.

The Evanston general store was originally supposed to open a couple of years ago, but the COVID-19 pandemic put everything on hold.

But now, the store/cafe is open for business, 7 am to 7 pm, every day.

Weiss says the product mix might change over time.

“I really want to listen to what everybody wants,” he says. “In six months, it could look very different.”

But the overall concept, of a neighborhood coffee/sandwich/food/and other stuff you need store, will remain the same.

“That,” says Weiss, “is a great compliment.”

Memories of the old days in an otherwise modern, new store. No, the phone doesn’t work!

Restaurants Where Northwestern Students Should Eat in Evanston

Restaurants Where Northwestern Students Should Eat in…