In recent years, Chicago’s foodie culture has become as much a part of the city’s fabric as its sports fandom or cultural attractions like “The Bean.” Not only does the city have 23 Michelin-starred restaurants and host the annual James Beard Awards (“the culinary Oscars”), but there also are iconic Chicago foodstuffs that have become a huge part of the city’s heritage.

The “Big Three” on the list—pizza, hot dogs and Italian beef—are the centerpiece of a new exhibit coming to Elmhurst History Museum, opening June 24 and running through Oct. 2. Called “Eat Your Heart Out: Iconic Chicagoland Foods,” the installation looks to examine the roots of the delicacies — and opinions on how they should be consumed — alongside memorabilia and interactivity that gives new meaning to the taste of Chicago.

Elmhurst History Museum curator of exhibits Dan Bartlett says that “Eat Your Heart Out” was planned as a family-friendly option for the summer to resonate with locals and visitors — and in putting it together, the team gleaned an even greater appreciation for what’s being up in the city.

“One of the things that struck me was how it all started out as working-class, immigrant foods,” says Bartlett. “Pizza in the States doesn’t look anything like it does in Naples [Italy] but it has its origins in the Italian-American community, as does Italian beef, while the hot dog is from German/Austrian immigrant communities. These were very basic working-class foods that eventually permeated through the Chicago community, leaving their ethnicity of origin and crossing neighborhood lines to become staples of Chicago dining.”

The exhibit shows prime examples, with spotlights on branding giants like Vienna Beef, Buona Beef, Portillo’s, Lou Malnati’s and dessert staples like the Original Rainbow Cone. Many have become so influential they have spawned national Hot Dog Universities (in the case of Vienna Beef) to teach people how to open hot dog stands, and Buona even helped institute a National Italian Beef Day.

A few years ago, Buona also entered into a unique partnership with Rainbow Cone to offer the tiered ice cream in its restaurants. Doing so helps carry on the traditions of the 41-year-old Italian beef emporium and the 96-year-old dessert haven, both of which still operate as family-owned businesses (another common throughline of Chicago food giants that’s apparent in the exhibit ).

“We opened our first restaurant in Berwyn; my grandfather dug the foundation himself,” says John Buonavolanto, catering and sales manager and third-generation owner of Buona Beef. “He wanted to create something for his kids, and now his grandkids, where we could all work together and grow together as a family. … It’s very uncommon to last three generations, and we take a lot of pride in that.” 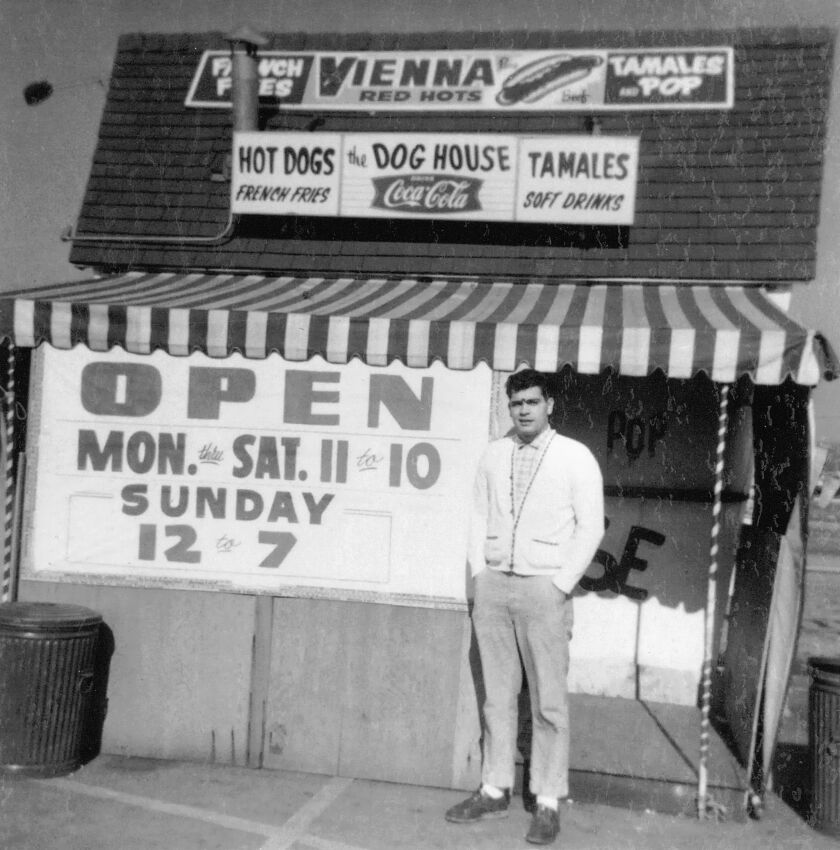 Dick Portillo stands in front of his first hot dog stand at Villa Park in 1963.

Buonavolanto says Buona loaned the Rainbow Cone ice cream slicer for the exhibit. And among the other food ephemera (such as photos, video oral histories, merchandise and a reel of yesteryear commercials like the famous “nobody doesn’t like Sara Lee” promo), there will also be recreations of a hot dog stand and iconic pizza joints with the red-and-white checkered tablecloths as well as food service play stations for kids.

Perhaps the most controversial component will be the “food fight” wall where visitors can voice their opinions on hot takes such as the ketchup-on-a-hot-dog debate, and if pizza is best cut in triangles or squares.

“We’ll compile the results and put them in the gallery and online on a weekly basis,” notes Bartlett.

The other way in which he has been prepping for the exhibit is collecting copious amounts of Chicago’s favorite garnish for a “wall of giardiniera” that will be on display.

“It’s up to about 60 varieties,” says Barlett. “I have had the privilege of driving around to a lot of the local delis and sandwich shops and picking up their house brands.” 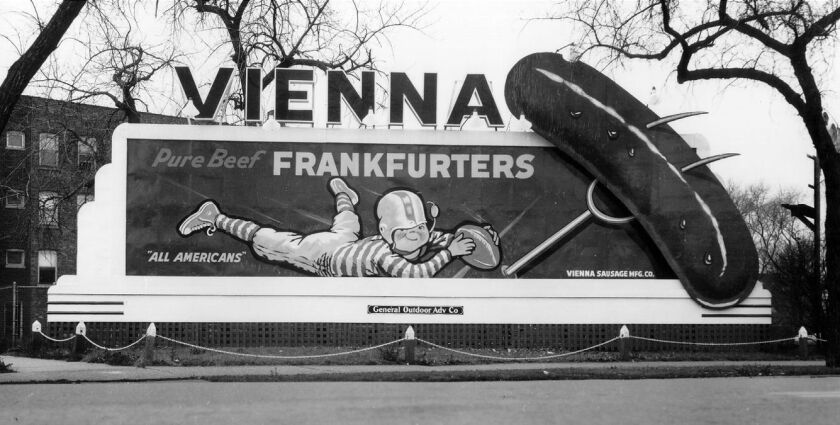 A Vienna Franks billboard from 1962 is photographed. The photo is among the items on display in “Eat Your Heart Out: Iconic Chicagoland Foods.”

Barlett also paid a visit to Vienna Beef’s warehouse to pull artifacts from its former pop-up museum. It opened in 2018 to celebrate the 125th anniversary of the brand that got its start at the 1893 World’s Columbian Exposition when two immigrants from Vienna, Austria, came to showcase their hot dogs, “and they never left,” says Tom McGlade, senior vice president of marketing/eCommerce for the company. “It was such a success they opened a little storefront the next year in 1894, and the company really got its notoriety in the ’30s during the Great Depression when food was scarce and so was money, but you could get a hot dog with all the Chicago toppings for a nickel.”

For “Eat Your Heart Out,” Vienna Beef loaned a cross-section of items from its long history like paper hats and aprons, patio umbrellas and old wooden signs that were once created silkscreen-style by an in-house artist. Though the brand’s pop-up museum was only around for two years (shuttered due to a lack of space when Vienna Beef relocated to the West Loop), McGlade says that working with the Elmhurst History Museum has inspired the company to rethink that. Dan Bartlett, curator of exhibits at the Elmhurst History Museum, sets up the “wall of giardiniera” display which is part of the “Eat Your Heart Out: Iconic Chicagoland Foods” exhibit.

“We are thinking about reopening the museum, even if it’s just virtual. … Maybe we’ll learn some things from this latest exhibit,” McGlade says.

In addition to the physical collection, the Elmhurst History Museum will offer special programming throughout the run, including a picnic on the park July 10 with appearances by the Oscar Meyer Wienermobile and a vintage 1929 Vienna Beef delivery truck, as well as Rainbow Cones for guests . There’s also a Chicago Foods Trivia Night on July 28, and a Family Pizza Making Workshop on August 3.

Senate Deal Raises Hopes for a Reduction in Gun Suicides

Everything You Need to Know – NBC Chicago