This is Good News Sunday, a compilation of some of the more upbeat and inspiring stories published recently by the Daily Herald:

For the second year, several Elgin-area barbershops will provide free haircuts for students in need before they head back to school.

Haircuts and hairstyles will be offered from 10 am to 3 pm Sunday, Aug. 14, at the Boys and Girls Club of Elgin, 355 Dundee Ave., Elgin. It is open to students from kindergarten through 12th grade.

Wilbur Dumas, Jr., who opened Lincoln Avenue Barbershop in Elgin five years ago because he wanted to give back to the community, is leading the effort. Dumas, 39, of Elgin, is a product of the Boys and Girls Club of Elgin and a graduate of Larkin High School in Elgin.

“We got about 20 barbers,” Dumas said. “We’re accommodating the Elgin-area Boys and Girls Club youth and anybody that … can’t afford haircuts.”

Participating businesses include Sauvage Barber Parlor in South Elgin, Fade Stars Barbershop in Elgin, In The Cuts Hair Studio in Elgin, Tapered Edges in West Dundee, and Bea’s Touch of Style in Elgin.

Dumas is coordinating the hair cutting with Elgin’s annual backpack giveaway organized by Elgin City Council member Corey Dixon. The giveaway is also taking place at the Boys and Girls Club of Elgin.

Disney World trip a ‘magical’ time for boy with autism

Nine-year-old Maddox Yates-Benter, lower left, and his parents, Patrick Dalton, left, and Joey Benter, right, recently returned from a “magical” trip to Disney World that was gifted to them by the owner of BD’s Mongolian BBQ in Naperville.
– Courtesy of Patrick Dalton

Nine-year-old Maddox Yates-Benter, however, created a whole new meaning for the word during a recent trip to the Florida resort with his dads, Joey Benter and Patrick Dalton.

The trio from Sandwich was given the four-day dream trip by the CEO of BD’s Mongolian Grill in Naperville, Gregg Majewski. Maddox, who has autism, loves to hit the gong at the restaurant every time he’s there, but during a recent visit, BD’s was closed due to a burst water pipe.

General Manager Kirsten Simmons allowed him to come in and hit the gong for as long as he wanted. Dalton wrote an email to the corporate office thanking Simmons and BD’s for being so kind. When Majewski read the email, he decided to go a step beyond and surprise the family with the free trip to Disney World.

Maddox and his dads were in Orlando July 11-15. They stayed at an Animal Kingdom resort.

“Every morning, Maddox would have his breakfast of Cheerios sitting on the balcony, just watching giraffes and zebras and other animals roam around,” Dalton said. “Seeing his face light up was truly magical.”

Dalton said Maddox talks about the trip every day. He’s also looking forward to his next trip to BD’s to hit the gong again.

Karate instructor for all ages still among world’s best 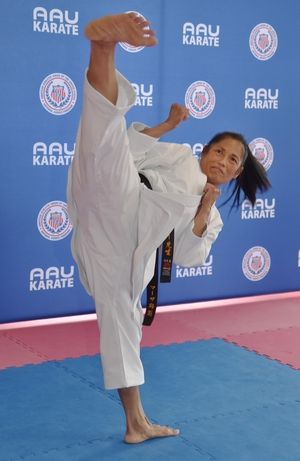 At 54, Sensei Linda Donner teaches martial arts in her Lake Zurich dojo to children as young as three and adults as old as 80.
– John Starks | Staff Photographer

At 5-foot-1, 134 pounds, Linda Donner of Barrington doesn’t look intimidating. But her roundhouse kicks, where her foot delivers a blow to the punching bag above her head, are impressive. So is her speed.

Last month, Donner, owner of the Traditional Karate Organization, a martial arts and fitness studio in Lake Zurich, brought home a bronze medal for the United States in the World Union of Karate-Do Federations in Fort Lauderdale, Florida.

Donner, a sixth-degree black belt in karate, finished third in the 51-60 age bracket for kata, an event in which the participants perform individual routines before judges, who score their proficiency in a combination of movements in a manner similar to gymnastics competitions.

In two other competitions against dozens of athletes ages 21-35, Donner placed 8th and 6th.

“I made it to the semifinals,” she says. “I missed the finals by one-tenth of a point.”

One of her students, 20-year-old Erick Leska, won a gold in his beginner weapons competition and a bronze in an overall competition.

“I teach all ages, and give them tools they can easily use if they need to protect themselves,” Donner says.

They Do: Kismet or fate? Finding love on a first date.

Young artists show off their work at museum gallery opening