After failing to pay its property taxes for years, Josephine’s Cooking, a popular soul food restaurant in Chatham, faced the prospect of losing its building to real estate speculators at a tax sale six years ago.

But then, in a move that staved off that danger, a little-known government agency called the Cook County Land Bank Authority stepped in. Without having to put up a cent, it put in a claim for the property.

That move meant that any real estate speculator couldn’t out-muscle the county agency and take control of the restaurant unless it paid the delinquent tax bill in full: more than $108,000 plus interest. At a sale aimed at bargain-hunters, that was an unlikely prospect, and no one came forward to do that.

The land bank’s mission is to acquire vacant and abandoned properties and turn things around for them and the economically struggling neighborhoods where they’re typically found. To do that, it has an unusual legal authority: It wipes out delinquent real estate taxes.

That means anyone wanting to invest in rehabilitating a property can buy it at a bargain price from the land bank and, beyond that, not have to pay off a mountain of unpaid property taxes. That makes it easier to find buyers willing to put in the money the land bank requires be invested to rehabilitate properties.

But this building wasn’t abandoned. There was a working restaurant there, owned and operated by “Mother” Josephine Wade and her son Victor Love.

That wasn’t just unusual. It wasn’t allowed. The Cook County ordinance that created the land bank prohibits the agency from acquiring any home or commercial building that’s occupied.

Not only did the land bank claim the property anyway, it ended up holding onto it for four and a half years — even as Wade continued to operate Josephine’s there and continued to skip paying the property taxes.

During that time, as her unpaid taxes kept mounting, the land bank hired Wade to cater and host a breakfast meeting Oct. 15, 2016, at her restaurant at 436 E. 79th St., which was then known as Capt.’s Hard Time Dining. Advertising the gathering, the land bank said it was “looking for qualified community developers with demonstrated experience in rehabbing distressed residential homes in Cook County” and included a photo and the address of the restaurant.

The meeting drew 150 real estate-speculating rehabbers, according to county records that show the land bank paid Wade $3,105 for using the restaurant for two hours and providing a breakfast of eggs, sausage and pancakes.

By holding onto his claims on the restaurant, the land bank kept Cook County Treasurer Maria Pappas from offering Wade’s unpaid taxes for sale at four of five subsequent tax sales, at which speculators could have paid a fraction of the past-due taxes for a chance to take ownership of the building.

Then, 10 months ago, the land bank gave up its claim on the building.

And real estate speculators stepped right in, looking to take control of the property for a fraction of her debt, which now tops $316,460, plus interest.

That means Wade is in danger of losing the building — and Cook County taxpayers could lose out on that $316,000-plus in property taxes that went unpaid.

The land bank — which was created by Cook County Commissioner Bridget Gainer under the authority of Cook County Board President Toni Preckwinkle — said it can’t explain why it held onto the restaurant under its former executive Robert Rose nor say why Rose chose the restaurant to host the breakfast meeting.

“No one currently in leadership at the Cook County Land Bank Authority or the board of directors attended the 2016 meeting in question,” land bank officials said in a written statement. “CCLBA is reviewing procurement policies for hosting events to ensure they are not done at properties with delinquent taxes or under review by the land bank.”

Asked about the property, Rose, who no longer works for the land bank, said Josephine’s was among 7,700 properties the land bank pursued in January 2016 because they were “severely tax-delinquent.”

He did not answer questions about why the land bank claimed a property that wasn’t vacant though it was legally barred from doing so, then held onto it for years.

As for why Josephine’s was chosen for the October 2016 event, Rose said: “There are limited available venues to host 100+ people on the South Side during the weekend. There is no unit of government in Illinois nor operating business in the state, including the Chicago Sun-Times, that requires a venue to be current on property taxes.” 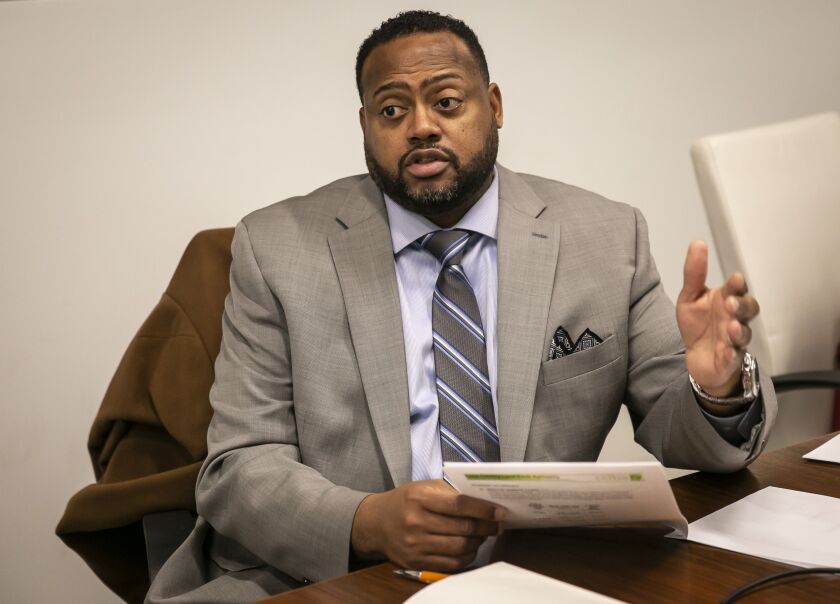 Rose was the land bank’s executive director for six years, leaving when his contract ran out June 30, 2021.

Under Rose, the land bank filed two separate claims on Wade’s tax-delinquent restaurant. The first, in January 2016, removed the property from the next three tax sales — between April 2017 and May 2018. Approaching the deadline when it would be required to take title to a property claimed at a scavenger tax sale, the land bank dropped that first claim in July 2018.

Ten months later, tax buyers were given a chance to pay Wade’s unpaid property taxes for 2017, but no one did.

Then, the land bank put in its second claim on the restaurant at the tax sale in July 2019.

Asked why, after the agency decided not to take title the first time, it put in a second claim, Rose said: “An administrative error is responsible for the land bank acquiring the tax certificate the second time. The property was returned to the treasurer as soon as the error was discovered, and the administrative error was corrected.”

The land bank didn’t relinquish that second claim, though, for more than two years — until August 2021, records show.

Two months after Rose’s departure, the land bank relinquished its claim on Josephine’s restaurant, doing so in time for the treasurer to include it in the February 2022 scavenger tax sale for all properties with delinquent taxes through 2018.

Wade, 79, has until Aug. 22 to pay off those delinquent taxes, or Yasin can ask a Cook County judge to award him the deed to her restaurant. He would still have to pay what she owes since 2019 — about another $63,000.