At the northwest corner of 115th and Halsted streets sits a stretch of urban pavement that bears mute witness to Chicago’s economic divide.

The 12-acre parcel fronts on two busy streets. A Jewel grocery closed there years ago, and nobody has moved in since. Put a parcel of this size in Fulton Market or Logan Square, and developers would race to line up a deal. On the South Side, though, things can be excruciatingly slow — if they happen at all.

It’s taken a nonprofit group years of effort to get control of the property, arrange key partnerships in the private sector and develop a plan for the site that passes muster. But the resolve of the Far South Community Development Corp. could soon be rewarded.

Abraham Lacy, the group’s president and CEO, has been running the gantlet of community meetings any for-profit developer would recognize. He said various proposed uses were floated and rejected. The availability of fresh food is always an issue in the Black community, but that wasn’t a pressing need for this particular site, as there’s an Aldi just south on Halsted. Also, when the Jewel closed, the company wasn’t abandoning the market; it opened a larger store a few blocks west.

So, working with the Chicago architectural firm Lamar Johnson Collaborative, Lacy’s group has crafted a plan for 286 residences, a mix of multifamily buildings and townhomes, some with subsidized rents.

They call it Morgan Park Commons. The corner is on the edge of Morgan Park, abutting Roseland and Pullman. The development would include about 18,000 square feet of retail space along the major streets. There also would be a 3-acre park connecting to the Major Taylor Bike Trail, along the western edge of the property.

Lacy said in an area where single-family homes predominate, the development would offer a new housing option. The park and other open space would help with stormwater management while making the development an attractive place to live, he said. As is, the site — an empty, 67,000-square-foot store with a parking lot — has been an eyesore.

In a sign the project is nearly set for city zoning review, the planning department’s Committee on Design looked it over Nov. 9 and gave feedback. The committee is an independent group of urban design professionals that advises developers and the city, suggesting improvements.

The recommendations aren’t binding, but the process amounts to a high-level focus group offering free advice. Developers have grumbled about the committee, but they get a lot of benefit from it.

Committee members liked much about the project, including its attention to community spaces. But they said the site plan gives too much space to streets and to parking. At full buildout, the site could have as many as 346 parking spaces.

Reed Kroloff, dean of the architecture college at the Illinois Institute of Technology, suggested rethinking the street grid. Hana Ishikawa, principal at Site Design Group, said: “The boulevards are problematic,” so wide that “it doesn’t feel like a connected community.” Architect John Ronan said putting four-story buildings along the site’s edges, with shorter buildings in the interior, could create a harmful “fortress-like” effect.

Lacy said he and his architects are considering revisions but noted neighbors wanted the development to have ample on-site parking.

An employee of the neighborhood group for 11 years, Lacy said this is his first large-scale project. He’s hoping to get started on site preparation next year, with construction of the first phase along Halsted beginning a year later.

The organization has been resourceful in seeking help. The state, through efforts of the Illinois Legislative Black Caucus, appropriated $15 million in seed money for the project, and Lacy said he’s waiting for the funds to be released.

City officials have determined it will qualify for low-income housing tax credits. And Lacy is drawing on advice from prominent South Side investor Leon Walker, managing principal of DL3 Realty, and from Preservation of Affordable Housing, a nonprofit that builds multifamily homes.

“They have a heart to teach the next generation of developers,” Lacy said. “I’m leading this project, but I’m observing at the same time.”

In addition, Far South is a finalist for a $10 million Chicago Prize to be awarded by the Pritzker Traubert Foundation. It’s seeking money for a broad community investment initiative. Lacy said the group targets new housing and retail space along Halsted from 99th to 122nd streets, hoping to make it a more attractive southern gateway to the city. He said Morgan Park Commons can proceed without that grant.

If that neglected corner gets redone, who knows what the community can accomplish? 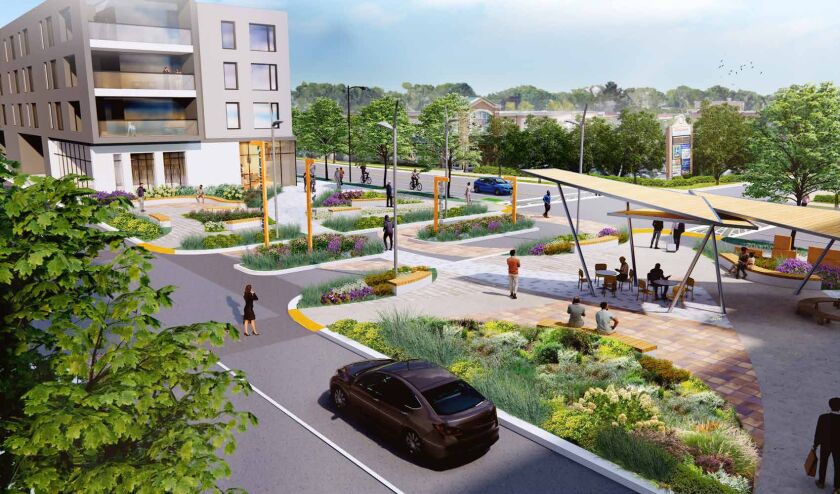 A rendering shows part of the interior of the planned Morgan Park Commons development.

California Author Uses Dark Humor — And a Bear — To…