The Cincinnati Reds (53-79) will start a three game series at Wrigley Field tonight at 7:40 PM against the Chicago Cubs (56-78). The Reds still have 9 games remaining against the Cubs this season. In fact, of the Reds remaining 30 games, 28 of those games are against teams in the NL Central (the Reds have a lone two-game series at GABP against the Red Sox later this month).

The Reds are coming off a series win against the Rockies, which was capped by grand slam from Aristides Aquino in a 10-0 blasting of the Rockies in the second game of a doubleheader on Sunday. The Reds are surprisingly 24-25 in their last 49 games, and 50-57 since the 3-22 start. There are 10 MLB teams with a worse record than the Reds since May 6th.

The Cubs were playing some solid baseball until recently. The Cubs went 18-8 from July 17th through August 20th. The Cubs are however just 4-11 since. They were swept over the weekend in St. Louis, and they were shutout twice by the Cardinals in that series.

Justin Dunn has pitched really well over his last 3 starts: 15.0 IP, 13K, 6 BB, 2.40 ERA. Dunn unfortunately had to leave his last start after four very strong innings against the Cardinals with right shoulder tightness (a move that he was upset at the time about, but later said to the media that it was probably the right decision by David Bell and Derek Johnson). Dunn was cleared to start tonight. Hopefully he is good to go and this isn’t going to be a long-term issue with Dunn, as he already missed over 400 days with this injury.

Tonight will be Justin Dunn’s first career start at Wrigley Field. His only other career start against the Cubs was his second start this season: 3.2 IP, 7 H, 5 ER, 2 BB, 4 K, 3 HR.

Wade Miley will be making just his fifth start of the season tonight, and his first start since June 10th. This will be Miley’s first start against the Reds since they controversially placed him on waivers last November. Miley’s 2022 season has been full of injuries, including inflammation in his elbow and a right shoulder strain. Miley was quoted in the Chicago Sun-Times for saying “he hasn’t pitched pain-free in five years” and that he is try to prove to people “that he is not broke.” Miley was gracious in his comments this spring about his time with the Reds and GM Nick Krall, but did question if the Reds are trying to win.

Miley has looked good this season when he has pitched. Miley has made four rehab starts with the Cubs (3 at Triple-A, 1 at High-A) with a 2.84 ERA/3.27 FIP. However, he had a setback between starts #3 and #4, and went 15 days between starts. Miley only threw 55 pitches in his last start on 8/31. It’s unlikely that Miley will be able to pitch very deep into the game tonight.

Miley has a career 3.11 ERA in 11 starts against the Reds, with the last start coming back in 2019. The Reds beat Miley in a surprising sweep at GABP of the eventual American League champion Astros. 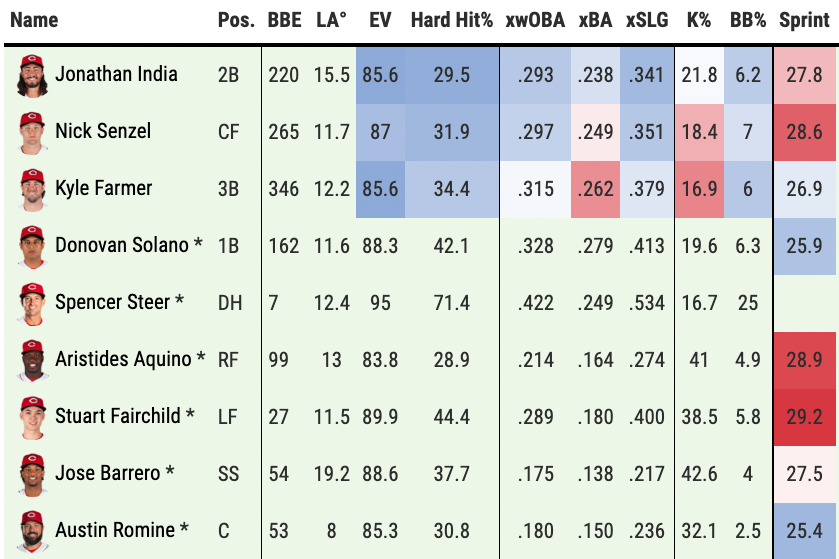 updates: Nick Senzel was scratched from the starting lineup and replaced by Albert Almora Jr. 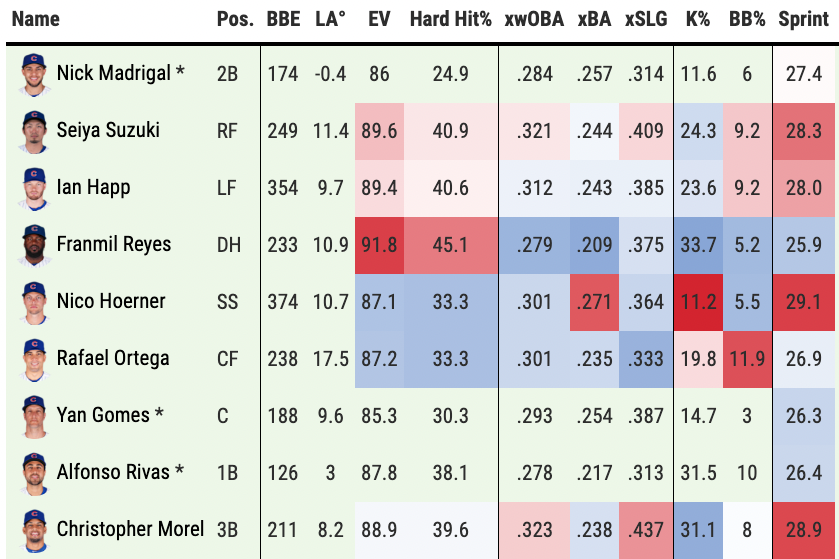 Albert Almora Jr. was activated from his rehab assignment and Colin Moran was designated for assignment to create the roster spot. This leaves the Reds will only one backup infielder (Alejo Lopez) and six outfielders (Almora, Senzel, Fraley, Aquino, Friedl and Fairchild). This might make one believe that Nick Senzel will see some more time in the infield over the final few weeks of the season.

Hunter Greene is set to make his second rehab start with the Triple-A Louisville Bats tonight at 6:35 PM. Greene threw 28 pitches, and some additional in the bullpen following his first rehab start. If all goes well tonight, Greene could make his next start with the big league club. Matt Reynolds is also in the Bats lineup tonight making another rehab start.

Jonathan India is back in the lineup tonight after having to leave Sunday’s game after fouling a ball off his leg. This appears to be a good sign for India, who has had a very difficult season with injuries. India has turned his season around, hitting .304/.386/.489 with a 139 wRC+ in the second half.

Tonight should be a fun game against a former pitcher, despite being in the middle of a lost season. Wade Miley is the exact type of pitcher that would seem to have had his way with a much better Reds roster a year ago, but this year the Reds have actually hit LHP (.712 OPS) much better than RHP (.682 OPS). Kyle Farmer (.901 OPS vs LHP) and Donovan Solano (.854 OPS) have been the Reds best hitters vs LHP, but watch out for Spencer Steer. Between all levels this year, Steer is hitting .333/.411/.616 with a 1,027 OPS vs LHP. Steer has destroyed LHP for his entire minor league career.