Throughout the years, Chicago’s skyline, parks, bars and streets have served as an iconic backdrop for some incredibly romantic moments—both onscreen and in real life.

There’s Julia Roberts and Dermot Mulroney slow dancing on an architecture tour boat along the Chicago River in “My Best Friend’s Wedding.” Nia Long and Larenz Tate dancing on their first date at the Wild Hare in “Love Jones.” Bill Pullman proposing to Sandra Bullock on the old Randolph/Wabash L platform in “While You Were Sleeping.” Meg Ryan and Billy Crystal decide to drive north on Dusable Lake Shore Drive to get to New York in “When Harry Met Sally.”

Heck, I even got engaged in Burnham Park last year near the lake!

So, out of curiosity, we asked Sun-Times readers: If you were writing a Chicago-set rom-com, where would your lovebirds meet?What followed were hundreds of answers that saw readers imagining meet-cutes at food trucks, museums, sports games and much more.

Many also shared their own, real-life romcom moments, like Gov. JB Pritzker, who suggested Shedd Aquarium on Twitter: “Greatest day of my life, where [Illinois first lady M.K. Pritzker] said yes.” Chasten Buttigieg also got in on the fun by tweeting, “Well, uh, funny story…” —referencing when US Secretary of Transportation Pete Buttigieg proposed to him at O’Hare Airport.

All of the answers combined ended up looking like a rundown of the city’s most romantic, romcom-worthy locations.

“Outside the Harold Washington Library staring at the gargoyles and we bump into each other because we are not paying attention.” —Michelle Willis

“Union Station — one is leaving on a weekend trip and one is moving to Chicago. They end up living in the same apartment complex. Next door as a matter of fact.” —Kathern R. Henderson

“In the middle of winter down a Chicago side street. One of them moved a dibs chair and the owner of said chair is not having it until they make eye contact — and blah blah blah.” —Courtney Heidi

“Under the Tiffany glass dome at the Chicago Cultural Center.” —Mallory Somera

“The Montrose Dog Beach. The dogs wrap the leashes around the humans “101 Dalmatians”-style.” —Aimee Levitt

“Chinatown. Two individuals placed next to each other at a group table on a crowded night.” —John Young

“At a bus stop. By the time the bus finally arrives, they’d already spent an hour chatting over food and drinks nearby and they don’t care to take it anymore.” —Yakov Pekar

“At Taquerías Atotonilco on 26st after a late night at the bar with the girls. He has the last green salsa bottle… so she has to get the courage and go ask if he’s done.” —Dee Zavala

“Ext: Chicago Winter — afternoon. Two soon-to-be lovebirds slide into each other trying to cross the icy bridge on N. State St., then get hot chocolates at the Daley Center, to make up for the inconvenience, of course.” — Yasmeena Aviles

“They both have Hot Doug’s tattoos and go at the same time for their free dogs. It’s a meat cute. Their relationship falters when it closes, but in the end they find other great Chicago places to stand in line for together.” —Sam Nelson

“Maybe a walking tour in Bronzeville. Lots of history and interesting architecture to talk about.” —Dorie R. Felsher

“At Wieners Circle at 2 am” —Tony Buccini

“Alfred Caldwell Lily Pool in the fall; Buckingham Fountain in the summer; Unabridged Books in the spring; Quincy Station in the winter.” —Adam Morgan 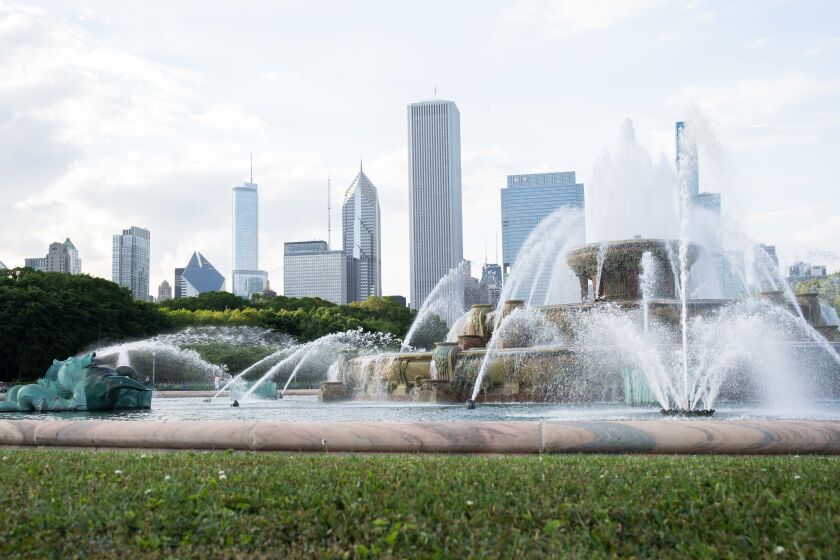 The Buckingham Fountain at Grant Park.

“First date: Wrigley Field behind First Base. Second date: Under the clock on State at Marshall Fields and then lunch in the Walnut Room by the Christmas tree. Third date: Adler Planetarium pier with the skyline view at sunset.” — Barbara Ann

“Since I met the love of my life at The Art Institute of Chicago, I’m going to say that.” —Katie Ann Taylor

“At the farmers market at Daley Plaza. Sitting at the fountain eating lunch. A pigeon snatches something off her plate and drops it on the guy eating his lunch across the fountain. Instant eye contact and everyone cheers. Then they randomly spot each other at different events/markets all over Chicago.” —Jenn Velázquez

“Getting their pets blessed on St. Francis Day” —Mairead Gartland

“In front of the Bean (Cloudgate) in Millennium Park. making funny faces in the reflection.” —Jack Franklin

“I met my wife then playing volleyball on North Avenue Beach when I was invited to join a work team after moving here from Seattle. I’ll stand by this story.” —Mikky Wright

“Happily tipsy, sitting next to each other at a midnight screening of ‘The Room’ at the Music Box Theatre.” —Alex Hawl

“If you kiss someone under the fireworks at the Navy Pier, you’ll be in love forever. Worked for me.” — Larry Parham 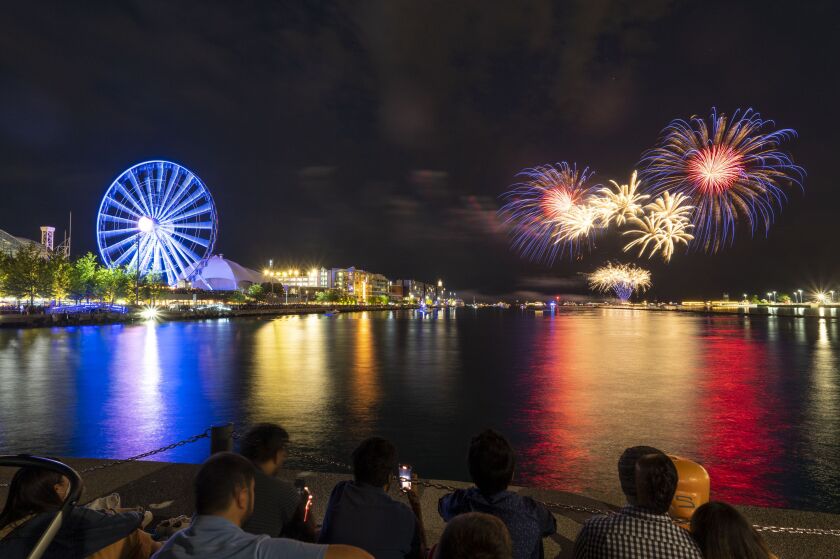 “At the museum of Science and Industry. Where we can go back in time, hold hands and walk done red brick streets and view stores and prices from the past.” — Genevieve Williams

“O’Hare Terminal 5. Where me and my wife met nearly 13 years ago.” — Erika Hoffmann

“Pratt Street Pier, out past the light during daylight on a clear day.” —Dan Rowan

“On the bus. That’s where I met mine and it’s the best story ever!” —Maryellen Karas LaJeunesse

“In front of the Chagall windows at The Art Institute.” —Stacey P

“57th Street Booksin Hyde Park is the perfect place for lovebirds to meet during a Chicago-set romcom.” —KB Jensen

“Simple. It is winter in Chicago and they both go to claim dibs on the same spot, but end up claiming dibs on each other’s hearts!” —Miguel Angel Rodríguez

“Ogilvie station. Because that’s where I first met my husband.” — Laurie Alfaro Residents lounge on the rocks and cool off in Lake Michigan at Promontory Point, Tuesday, June 21, 2022.

“The South Side Irish parade! He’s peeing in a bush and what’s that!?!? A girl peeing in the same bush!?!? Then they have 3-5 kids at least one named Liam.” —Brendan Murphy

“At Parisi’s on 63rd in Clearing. Waiting in line for a beef sauce sandwich.” —Gary Altman

“It might be too clever by half but meeting at a talkback at the Gene Siskel Film Center seems like it would work.” —Craig Nyberg

“Under the Bean, looking for a contact lens in a rainstorm.” —Tony Galati

“In the caverns of 57th Street Books, in the self-help dating section.” —Patti Joyce

“The House of Blues Chicago in the Foundation Room. That’s where I met my husband and we fell madly in love!” —Deborah McCabe 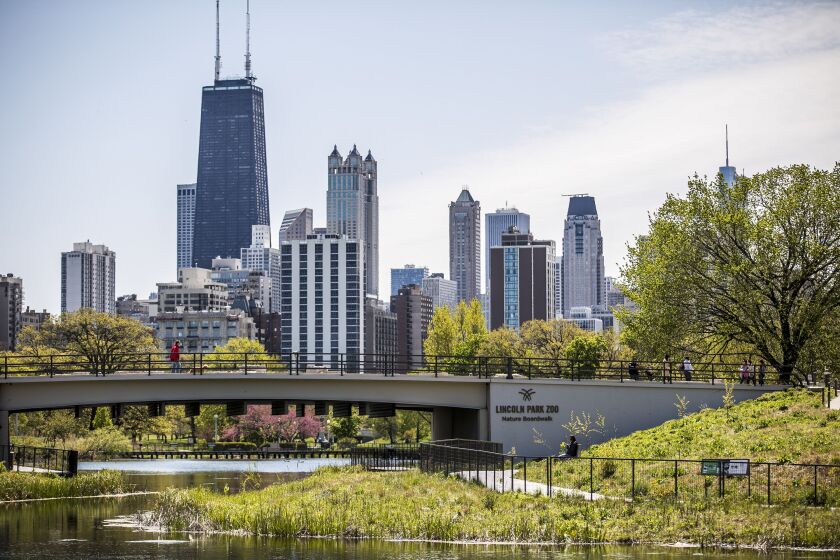 “Marshal Fields. Which, I guess, makes it a period piece. The Walnut Room. They both order the Frangomint pie, but there’s only one slice left, so they agree to share it. Cue a montage of them watching each other on the escalators.” —JS Puller

“At a crosstown classic while they’re on a date with other people. Oh, and of course, they’re fans of the opposing teams.” — Amanda Simmons

“At Lincoln Towing when they both are there trying to get their cars back.” —Jeff Hornstein

“Lakefront on a hot Chicago summer day. One dares the other to jump in the lake and they both jump in.” —Megumi Nakama

“It’s July 2019, you head over to the Humboldt Park Lagoon on a futile journey to spot Chance the Snapper.Instead of seeing Chance, you’re taken with the live music, beautiful weather with an underlying feeling of fun suspense — love is in the air.” — Emily Bolton 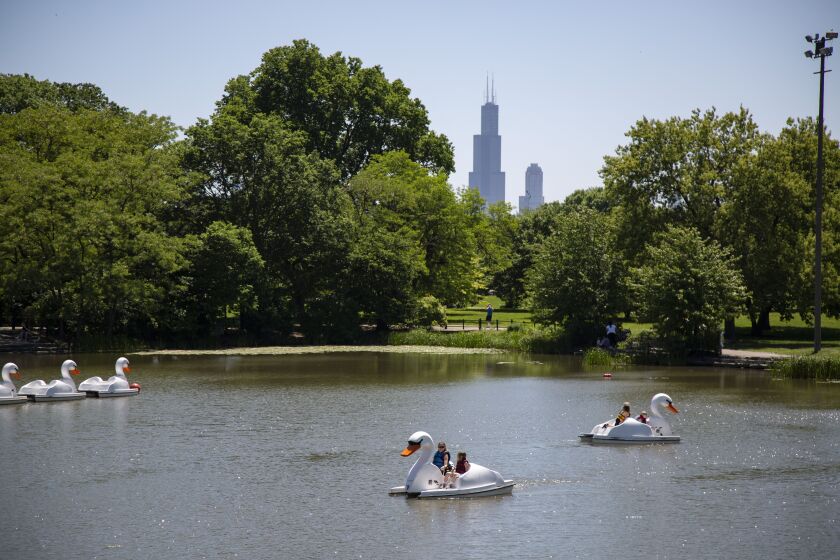 Swan boats coast along in the Humboldt Park Lagoon on June 8, 2020.

“My wife and I met at Daley Plaza!” —Zac Grisham

“Under the clock at Marshall Field’s at State and Washington.” —Melody VanderLeest

“Au Cheval, Boiler Room, Ceres or Promontory. Both are with friends or one is on a crappy date, and they lock eyes from across the bar.” — Brittany LM

“Solid Field, running into each other at a Bears game.” —Lori Lynn Walker

“At the Baskin-Robbins in Hyde Park, where the Obamas had their first date.” —Angie Martinez

“At the Taste, in front of a Robinson’s Ribs food truck.” — Stephanie Iniguez

“Montrose Beach! It’s perfect for lovebirds. That was kind of a softball, really.” —Charlie Kehm

Got some locations you think were missed? Send your suggestion to [email protected]

Knockoff Chanel, Prada And Other Designer Pieces Worth $686,000 Seized Near…

Former CPD officer charged with cheating way out of tickets