A Chicago reporter who filed a federal lawsuit against Democratic Mayor Lori Lightfoot for revoking his press credentials accused the city of trying to silence him after a series of contentious exchanges with the mayor’s office where he repeatedly questioned her “failures in performance.”

The suit, filed by journalist William J. Kelly in the US District Court for the Northern District of Illinois in late August, alleges Lightfoot and Chicago Police Department Superintendent David Brown violated his First Amendment and Fourteenth Amendment rights, saying, “They have done this for the most cynical and contemptible reason that can be imagined, to prevent Lightfoot from being questioned about their failures in the performance of the public offices they currently occupy.”

“Unfortunately, the textbook is from Venezuela,” he added.

REPORTER TO CHICAGO’S LIGHTFOOT: HOW CAN YOU ‘POSSIBLY EVEN CONSIDER’ RE-ELECTION AFTER ‘HARM YOU’VE CUSED’

FILE – In this Friday, March 20, 2020, file photo, Chicago Mayor Lori Lightfoot listens to a question after Illinois Gov. JB Pritzker announced a shelter-in-place order to combat the spread of the COVID-19 virus, during a news conference in Chicago.
((AP Photo/Charles Rex Arbogast, File))

The contributing reporter for the Daily Mail said he has used his platform to hold Lightfoot accountable for her “dismal performance” in office through honest reporting and pointed questions during press conferences. But with Lightfoot facing re-election and mounting criticism over her leadership, the mayor is doing everything in her power to keep him out of the room, he said.

“I believe that journalism is extremely important,” Kelly told Tucker Carlson. “I’ve had a media credential in Chicago for over 10 years. Emmy award-winning. Print, radio, TV, but Mayor Lightfoot is the least transparent mayor in our city’s history, and sadly, for better or for worse, the reason my questions were so effective, is because I was asking the questions that real Chicagoans wanted to hear. But they were hurting her re-election campaign so she canceled by media credential.”

In the suit, Kelly alleged that upon Lightfoot’s instruction, Brown “directed a police officer assigned to Lightfoot’s seventy officer strong security force to fabricate a report that Kelly had bumped into him on July 19, 2022. Brown then used this false report as a pretext to revoke Kelly’s press credentials on August 8, 2022.” 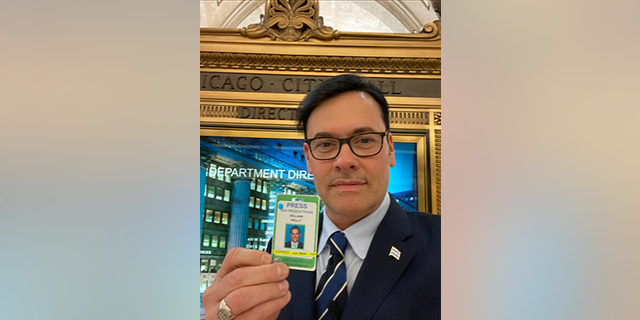 “In fact, the entire episode where this bump was falsely alleged to have taken place was videotaped by Kelly and this video shows no such bump took place,” the suit reads.

A recording from Kelly of the July 19 incident shows him following Lightfoot after she avoided taking his question at a press conference and being physically blocked by her personnel.

The footage, which was previously shared by The Daily Caller, includes Kelly repeatedly shouting “Don’t touch me” to her personnel, who immediately denied he touched the journalist.

Kelly noted that the incident came just one day after a combative exchange at a separate press conference where he grilled Lightfoot about her “taxpayer-funded business trip” to Paris “with your donors” as crime continued to plague Chicago.

“I think the real scandal here is that Mayor Lightfoot has 80-plus security guards that are assigned to protect her from me asking real questions during a re-election campaign at the time when the Chicago police are down 1,500 officers, crime is out of control, there’s a record of low arrests and a spike in police suicides,” Kelly said.

The revocation of his credentials “has a chilling effect on all reporters,” Kelly said.

“They see that I asked real questions, and got my credential revoked, canceled I guess would be a better word. I grew up in Chicago watching legendary reporters…chasing politicians up and down the street…and this is the tradition I want to uphold ,” he said. “This is the Chicago reporter tradition that Lightfoot wants to cancel.

“It’s my prayer that a federal judge will restore my media credential tomorrow, so I can go back to Chicago City Hall,” Kelly added.

Fox News’ Joseph A. Wulfsohn contributed to this report.

Yael Halon is a reporter for Fox News Digital. Story tips can be sent to [email protected]