Good afternoon. Here’s the latest news you need to know in Chicago. It’s about a 5-minute read that will brief you on today’s biggest stories.

Chicago’s most important news of the day, delivered every weekday afternoon. Plus, a bonus issue on Saturdays that dives into the city’s storied history.

A big chunk of money from the state’s richest man could not buy much Republican primary love for conservative businessman Ken Griffin’s slate of candidates in yesterday’s election for Illinois governor and other statewide offices.

Days after announcing his family and business would leave the state for Florida, Griffin reaped a weak return on his $50 million investment in the formerly obscure mayor of Aurora, Richard Irvin.

Instead, the winner in the proxy battle of right-wing billionaires was Dick Uihlein, the Lake Forest packaging magnate who was the primary source of funds for the successful campaign of state Sen. Darren Bailey in the GOP race for governor.

After spending nearly $54 million to defeat an income-tax hike on the richest people in the state in 2020, Griffin promised he would do as much as he could to prevent that proposal’s chief backer, the first-term Democratic Gov. JB Pritzker, from winning four more years in 2022.

And Griffin put his money where his mouth was, bankrolling the Irvin campaign almost single-handedly.

The Griffin-supported candidate for secretary of state, John Milhiser, and his pick for attorney general, Steve Kim, also lost Tuesday.

The $50 million from Griffin accounted for nearly 95% of what Irvin took into his campaign account, records show.

Griffin also gave $6,000 each to other candidates he endorsed in statewide races: Milhiser, Kim, Shannon Teresi (running unopposed for the GOP nomination for comptroller) and Tom Demmer (unopposed for the Republican nod for state treasurer).

Support civic-minded, independent journalism by signing up for a Chicago Sun-Times digital subscription.

Former Loyola basketball standout Cameron Krutwig has been back in the area for the last month, reuniting with family and friends, helping out with his alma mater’s basketball camps and crashing at his parents’ house in Algonquin.

OK, so it isn’t quite an Elvis-returns-to-Tupelo-level homecoming. But for the lefty center who was gone for 10 months playing his first season of professional basketball in Belgium, it has been really nice, our Steve Greenberg writes.

What’s next for Krutwig, 23? He’ll leave again for Europe in August, probably back to Antwerp, where he has a contract for next season. But the Giants have a new coach, opportunities seem to have a way of coming and going more unpredictably the farther a player is from home and, well, Krutwig — who averaged 7.2 points and 4.6 rebounds in 18.9 minutes per game as a rookie — will just have to wait and see. 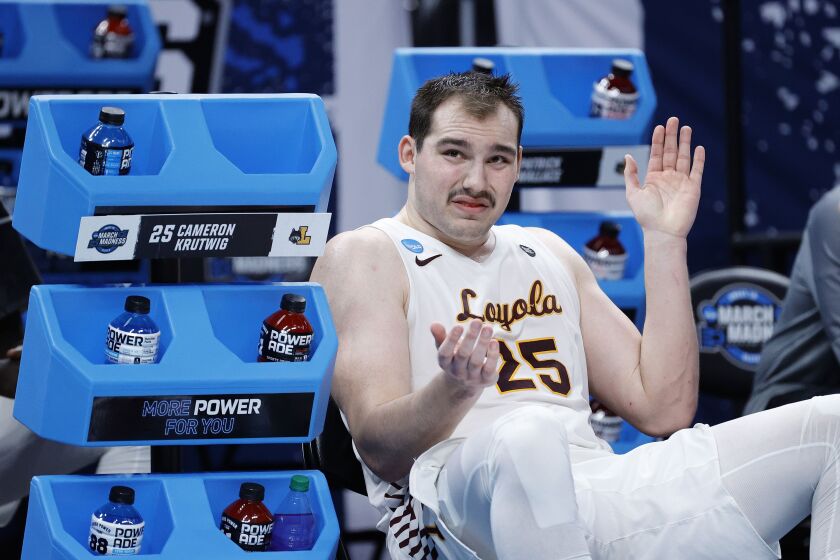 Cameron Krutwig of the Loyola Ramblers looks on from the bench as the clock runs down against the Oregon State Beavers during the 2021 NCAA Men’s Basketball Tournament at Bankers Life Fieldhouse on March 27, 2021 in Indianapolis.

“It’s just kind of how it works,” he said. “It’s the professional life. I’m just going to be patient at this point.”

One thing he has already learned to set aside hope for is an NBA opportunity coming his way — even if last week’s draft passed him by. If Krutwig can squeeze seven to 10 more years out of per ball, he’ll be a happy camper. And speaking of which, something he’d like to do for even longer than that is host his own basketball camp for up-and-coming players.

These days, while NBA newcomers are off to summer league, Krutwig is trying to get his own, brand-new camp off the ground. Details about the Krutwig Basketball Academy are all over his social media. By the start of the week, sign-ups for his camp — set to begin Aug. 1 — were coming along slowly, but Krutwig was determined to make it work.

From the press box

What makes a restaurant a quintessential Chicago eatery?

Send us an email at [email protected] and we might feature your answer in the next Afternoon Edition.

Yesterday, we asked you: What’s the most important issue to you as a voter this year?

Here’s what some of you said…

“Women’s Rights. All of them.” —Christine Bock

“Crime is top of my list this election.” —Nick Esposito

“That everybody who is eligible to vote can do so without restriction.” —Richard Brunke

“Fireworks Safety. With all the warnings that we have seen about Fireworks, people are still getting them. Also the amount of money being spent on them could be used instead to help feed the people and help the people who are homeless.” — Larry Matthews

“Not allowing the GOP to dismantle our democracy.” —Carol Montgomery

“Why corporations can laugh to the bank with record profits while I work myself to death just to buy food and gas.” —Ryan Alejandro de Lozoya

“Crime! We are living in Gotham City. The only thing we are missing is a rich white billionaire running around the city dressed as a bat, and with Ken Griffin leaving, the chances of that happening are very slim.” —Brian Althimer

Thanks for reading the Chicago Afternoon Edition. Got a story you think we missed? Email us here.