A rubber ducky atop a skull awash in suds. An aqua-colored owl. A woman with rabbit ears and no mouth. What appears to be the Disney character Pluto — or is it Goofy? — with a robot head in his mouth. And a purple frog holding a cheeseburger that has eyes and a mouth.

You probably wouldn’t guess that the brick building near Grand and Chicago avenues on which all of the above are painted is the headquarters of the aircraft parts company Setna iO.

The building is washed with murals. Many of them begin for an explanation: What is that? Others give a nod to the aviation industry, with their cartoonish characters in aviator goggles zipping around in little planes.

Multiple artists worked on this part of a building near Chicago and Grand avenues that’s home to an aircraft parts manufacturer. Some of the images reflect that, embracing an aviation theme.

The outdoor art resulted from a chance encounter during the civil unrest of 2020 between David Chaimovitz, the aircraft parts company’s chief executive officer, and the street artist who goes by Bird Milk. 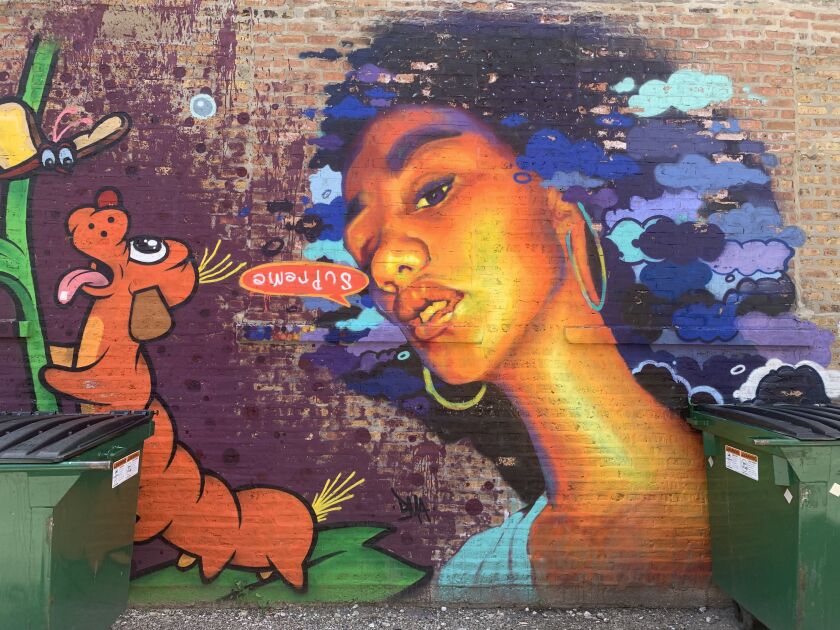 “I was on Division Street, and there was a peaceful protest and tons of people were there, and I see these guys painting all the boarded-up windows,” Chaimovitz says. “They were making some lemonade out of lemons. So I went up to them and said, ‘This is super cool. I have a business. I always wanted to have some murals.’ ” 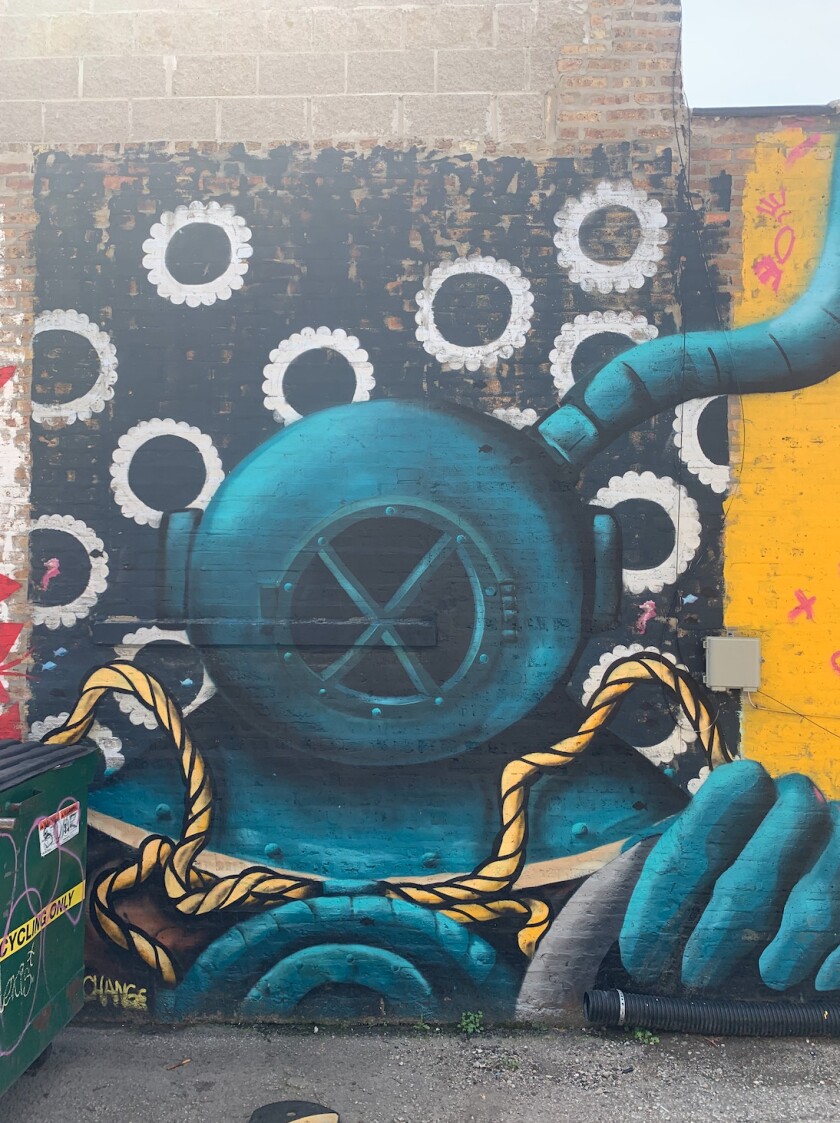 This mural was done by the artist who goes by “Orbe the Change.”

Bird Milk says: “David came up to me while I was painting another mural and asked about painting his building. Then, I just reached out to friends to see who wanted to paint.” 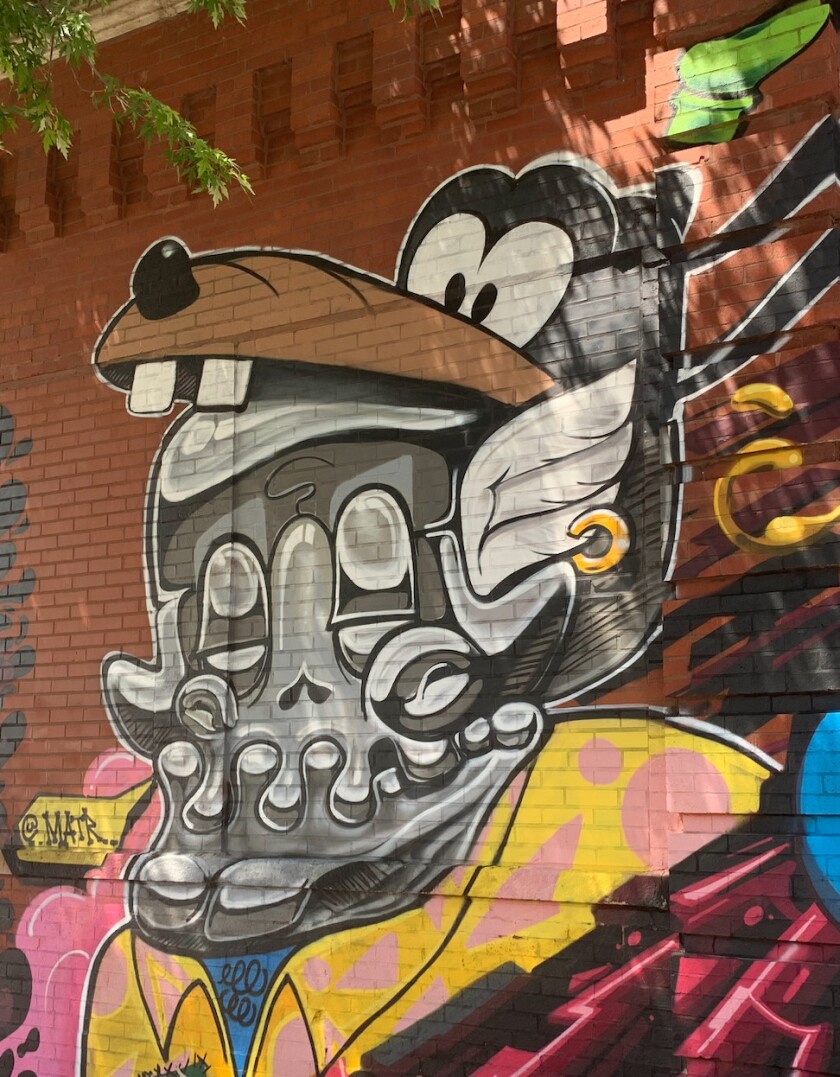 This mural was done by the artist who goes by MATR.

“We had a blast hanging out painting with all these amazing artists,” he says. 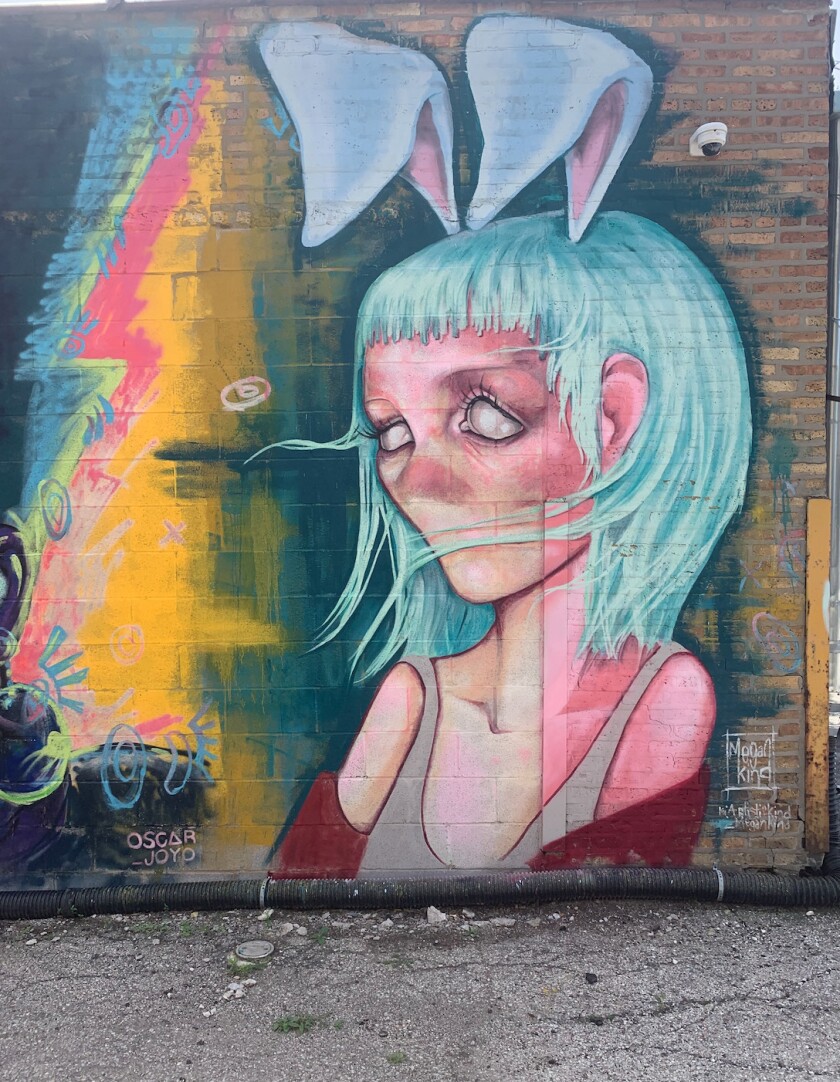 This mural was done by artist Megan Kind.

Chaimovitz says he gave the artists pretty much free rein, telling them: “If you can incorporate aviation into it, that’s cool. If not, that’s also cool. Come and have some fun, and make the city more beautiful.” Many of those who painted the walls of the West Side businesses were seasoned street artists. But this was the first outdoor mural project for James Eastwood, a tattoo artist. 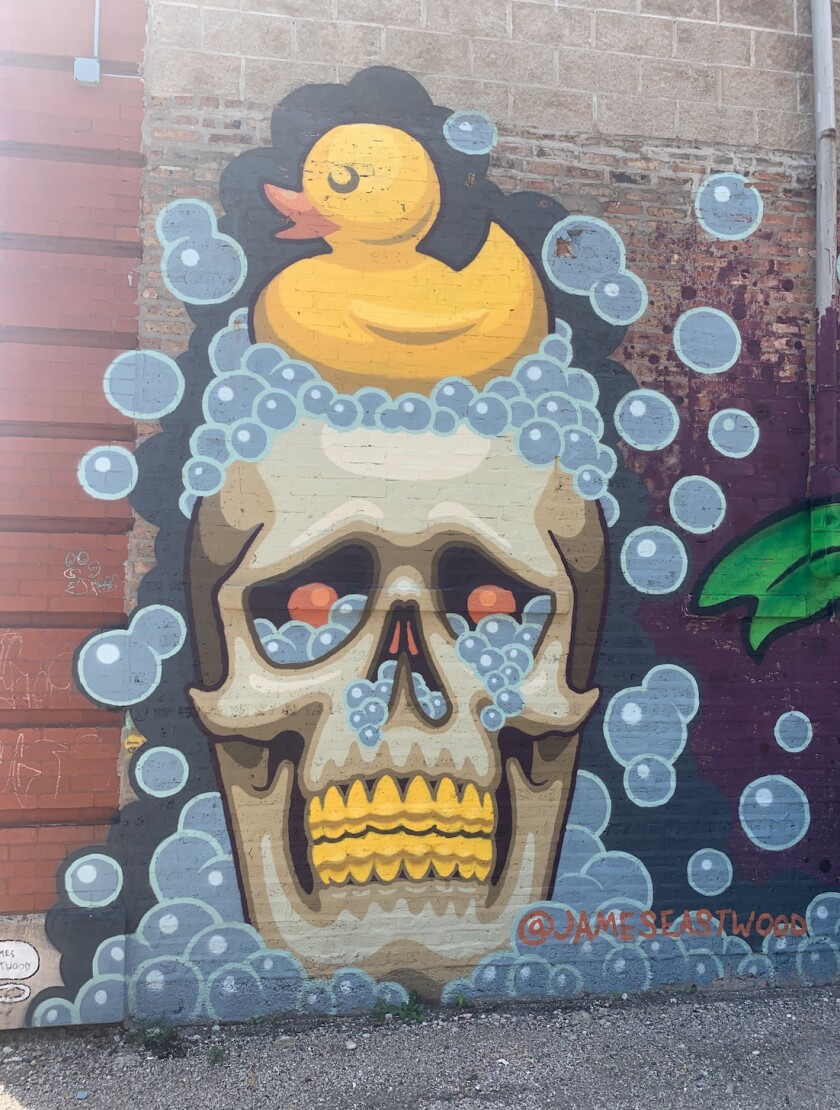 This mural was done by tattoo artist James Eastwood.

“I had asked my friend Chris” — the street artist who goes by Killabunz and who was involved in the West Side mural project — “to let me know if he ever has free space on a wall because I wanted to do a mural,” Eastwood says. 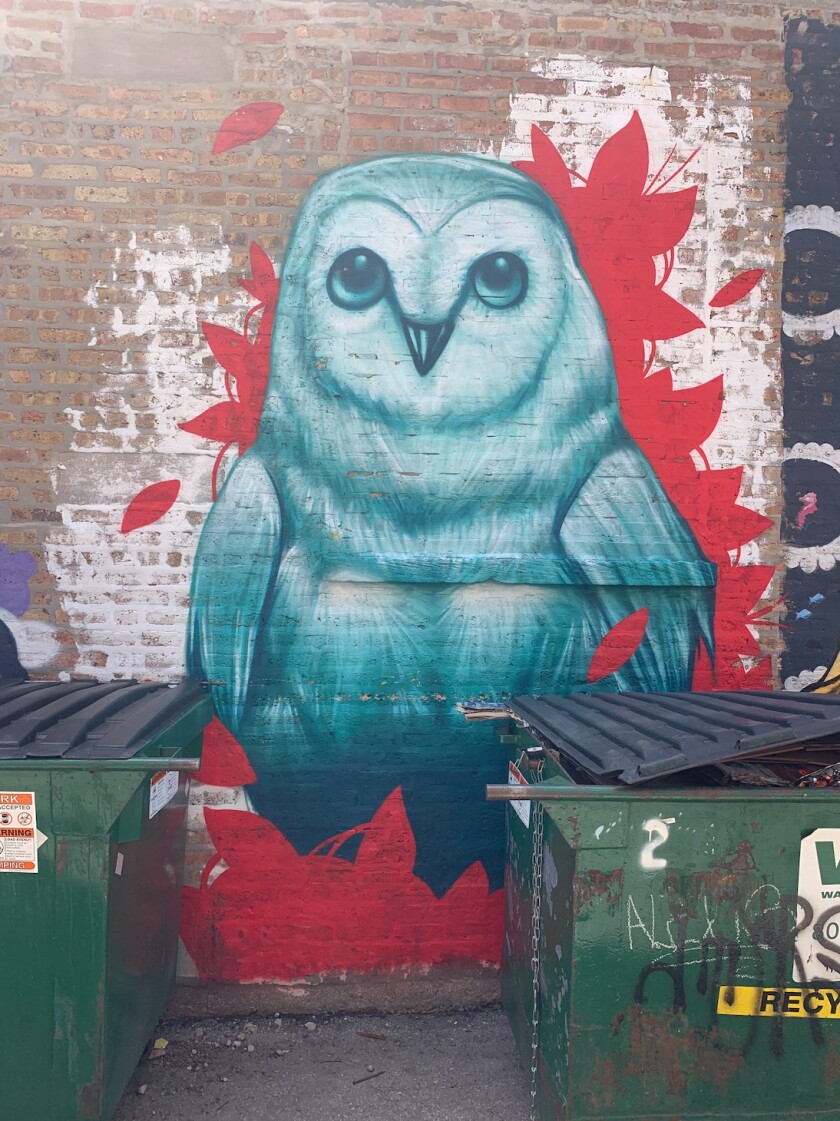 This part of the outdoor mural project was done by the artist known as FEDZ.

“I wasn’t sure what to paint, and Chris suggested I do a rubber duck and a skull because I’m a tattooer, so, of course, I dig skulls,” Eastwood says. “But I also have a bit of a rubber duck collection that was started as gifts that were a little bit of just a joke by a friend of mine.” 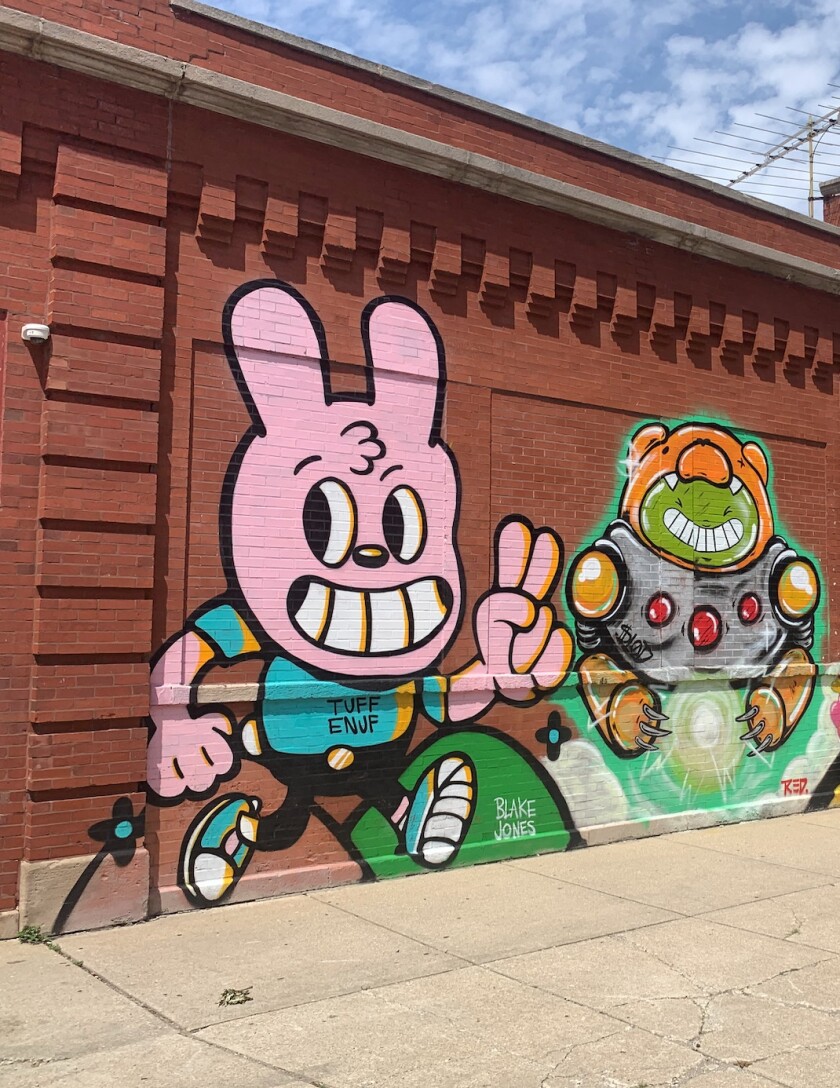 The image at left was done by artist Blake Jones, and the one at the right is by Reddor Santiago.

“It was my first mural,” Eastwood says. The mural at left was done by Jeff Pak. The painting on the right is by the artist KOZMO.

Jeff Pak, who was one of the more experienced muralists involved in the project, painted a blue-and-pink wolf that stands, arms crossed, tongue out, a patch covering one eye.

The creature appears next to a cartoonish girl who seems dazzled by jelly beans and a rainbow in a work by the artist KOZMO, who says it’s “my interpretation” of the animated character Princess Bubblegum.

Pak says “the wolf I painted was kind of just a tough guy I wanted to paint in contrast to the cuteness of Princess Bubblegum. Tough, cool, eye-patched wolf dude.”

Though the building is now pretty well covered with art, “We’re still kind of adding to it as time goes on and as I encounter more artists,” Chaimovitz says, noting that a Thai artist who goes by Alex Face completed a mural there recently. 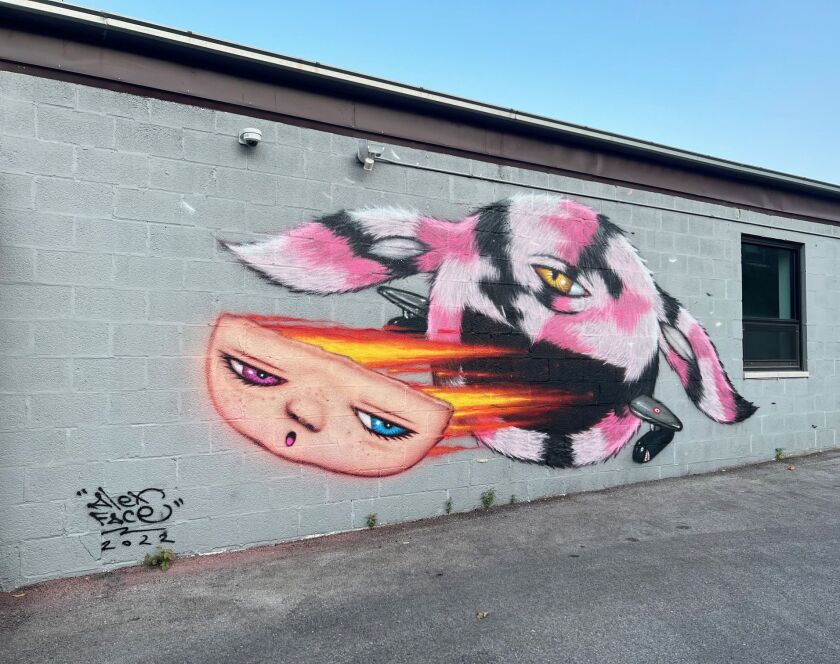 A mural by the Thai artist who goes by Alex Face on the building near Chicago and Grand avenues.

What Hayden Wesneski’s debut season means for the Cubs…