A person of interest in the mass killing that targeted a Fourth of July parade in the Chicago suburb of Highland Park has been taken into custody, the Highland Park police chief said on Monday evening.

More than 100 law enforcement officers had scoured the suburb and surrounding areas after at least six people were killed when a lone gunman rained down bullets on the town’s independence celebrations on Monday morning.

Thirty people were injured in the attack, with ages ranging from eight to 85, said Dr Brigham Temple, medical director of emergency preparedness at NorthShore University health center where 26 of the injured were treated. At least four of the injured are believed to be children.

On Monday afternoon, the police chief, Lou Jogmen, identified 22-year-old Robert E Crimo III as a person of interest in the shooting, and cautioned that the man should be considered armed and dangerous.

Police are still investigating Crimo’s connection to the shooting and declined to immediately identify him as a suspect. But they said identifying him as a person of interest and sharing his name and other information publicly was a serious step. 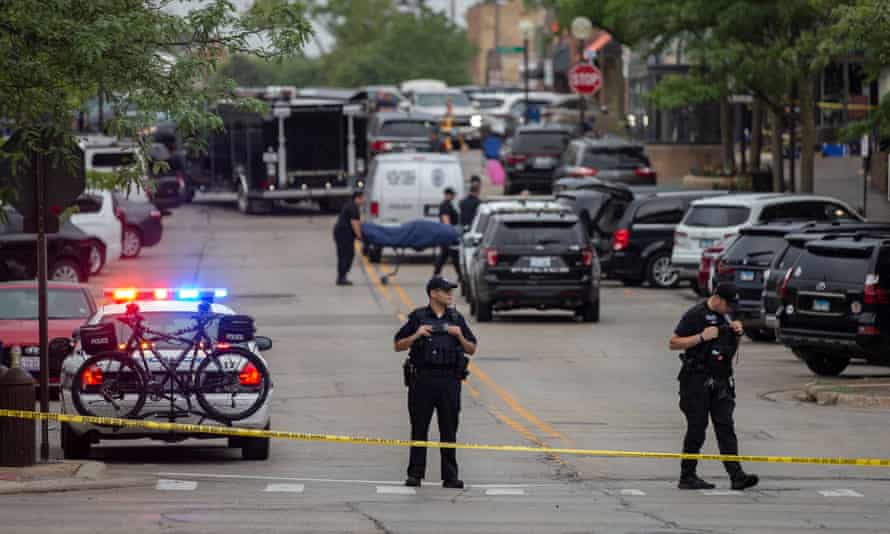 Crimo, who is from the region and goes by the name “Bobby”, which was pulled over by police after a brief pursuit, Jogmen said.

Earlier in the evening, more than a dozen police officers had surrounded a home listed as an address for Crimo in Highland Park.

Monday’s mass shooting was the latest in a long line of recent such events in the US that included a school attack in Texas and the murder of Black shoppers at a supermarket in Buffalo, New York.

Illinois Governor JB Pritzker called the shooting “evil” at a news conference in Highland Park on Monday evening. “If you are angry today, I’m here to tell you to be angry. I’m furious. I’m furious that yet more innocent lives were taken by gun violence,” he added.

“While we celebrate the Fourth of July just once a year, mass shootings have become our weekly – yes, weekly – American tradition.

“There are going to be people who say that today is not the day, that now is not the time to talk about guns. I’m telling you, there is no better day and no better time,” Pritzker said.

Highland Park’s mayor, Nancy Rotering, said her community had been “terrorized by an act of violence that has shaken us to our core”, adding: “On a day that we came together to celebrate community and freedom, we are instead mourning the tragic loss of life and struggling with the terror that was brought upon us.”

Joe Biden, who recently managed to get some moderate gun reform legislation through Congress, said in a statement he was “shocked by the senseless gun violence that has yet again brought grief to an American community” and pledged to do more.

“There is much more work to do,” the president said. “I’m not going to give up fighting the epidemic of gun violence.”

The attack began just after 10am local time, when a gunman opened fire on parade-goers from a rooftop of a business using a “high-powered rifle,” Christopher Covelli, spokesperson for the Lake County major crime taskforce, said. The violence sent hundreds of marchers, parents with strollers and children on bicycles in the close-knit community of about 30,000 people fleeing in terror, police said. One witness said he had counted more than 20 shots during the attack.

Several nearby communities canceled their Fourth of July celebrations out of fears of a second assault. Swat teams went door to door in a search for the attacker, and residents were urged to shelter in place.

One witness, named only as Alexander, said he hid his son in a dumpster after the shots rang out. “I picked up my son and started running … we ran behind a building and I put my son in a dumpster and he sat there with his dog and I went back to look for the rest of my family,” he said. 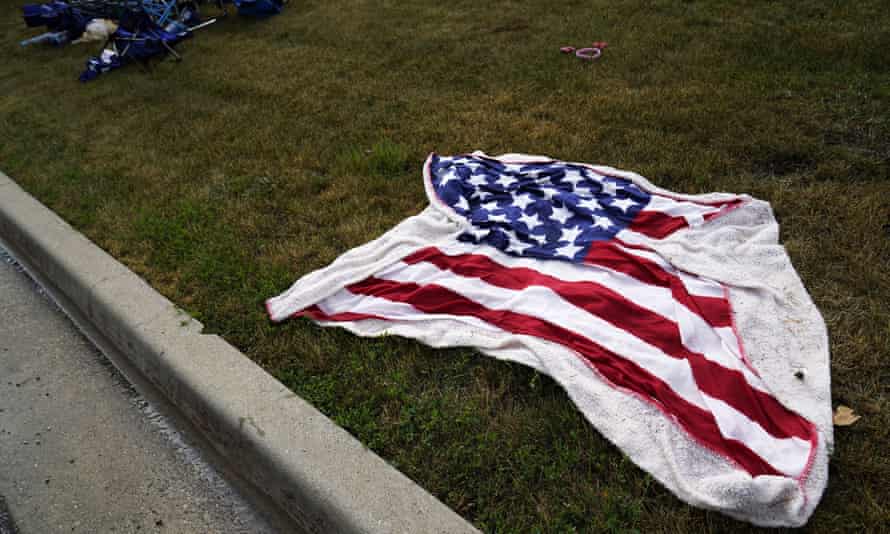 A blanket lies on the ground following the shooting. Photographer: Nam Y Huh/AP

Gina Troiani and her son were lined up with his daycare class ready to walk on to the parade route when she heard a loud sound that she believed was fireworks, until she heard people yell about a shooter. “We just start running in the opposite direction,” Troiani told the Associated Press.

Troiani said she pushed her five-year-old son’s bike, which was decorated with red and blue curled ribbons, through the neighborhood to get back to their car.

“It was just sort of chaos,” she said. “There were people that got separated from their families, looking for them. Others just dropped their wagons, grabbed their kids and started running.”

“There’s no safe place,” said Highland Park resident Barbara Harte, 73, who had stayed away from the parade fearing a mass shooting, but later ventured from her home.

Debbie Glickman, a Highland Park resident, said she was on a parade float with co-workers and the group was preparing to turn on to the main route when she saw people running from the area.

Ron Tuazon spoke to the Associated Press when he returned to the site of the parade to retrieve chairs, blankets and a child’s bike that he and his family abandoned when the shooting began.

“It definitely hits a lot harder when it’s not only your hometown but it’s also right in front of you,” he said. 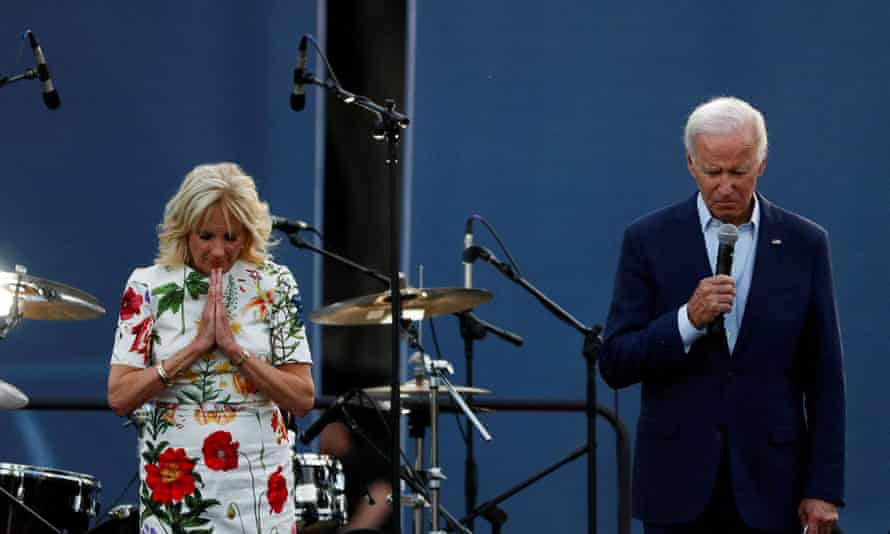 Jill and Joe Biden hold a moment of silence for the victims of the mass shooting. Photographer: Tom Brenner/Reuters

“It’s commonplace now,” Tuazon said of what he called yet another American atrocity. “We don’t blink anymore. Until laws change, it’s going to be more of the same.”

Police have said that five adults died at the scene and a sixth in an area hospital. A critically injured child was among those transported to medical facilities.

Police have not released details about the victims or wounded but Mexico’s director for North American affairs said one of those killed was a Mexican national, Roberto Velasco. He said two other Mexicans were wounded.

Separately, the family of Nicolas Toledo confirmed to CBS Chicago that the 76-year-old was among those killed. “We are all feeling pretty numb. We’re all pretty broken inside,” his granddaughter told the news station.

Less than 12 hours after the Highland Park killings, two police officers were shot and wounded in Philadelphia as thousands of people celebrated a Fourth of July concert and fireworks show, local officials and media said.

Both officers were in stable condition, CBS3 Philadelphia said, citing the police department. Police were searching for the shooter.

The killings on Independence Day renewed a national debate over why the country sees such events with deadening regularity and why officials and politicians appear powerless to stop them.

Cook County’s Got a Brand New Flag, Made by a High School Student