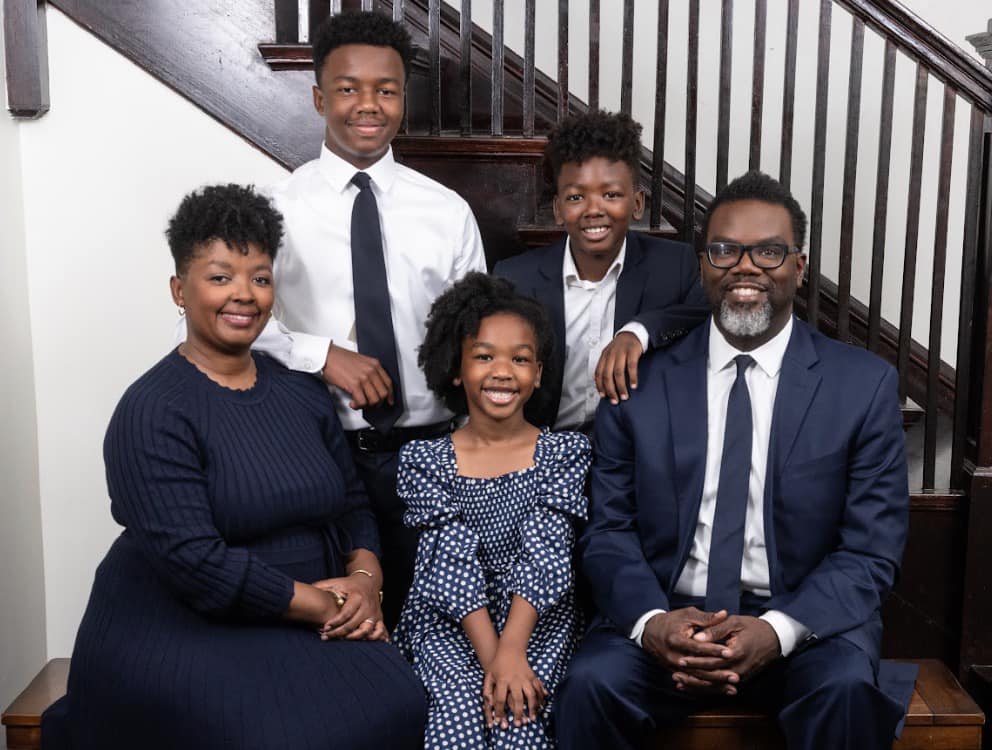 The Johnson family in their Austin home.

When you listen to CTU member and mayoral candidate Brandon Johnson speak, his voice full of passion and fervor, you may feel like you’re at a Sunday service.

“As the son of a pastor, I know how to bring it on,” Johnson called out one chilly November morning as he stood outside City Hall. Along with candidates for city council, Johnson was accepting the endorsement of United Working Families in his campaign for mayor of Chicago.

As one of 10 sisters and brothers, Johnson was raised on a foundation of hard work, faith and service — values ​​he now teaches his children Owen, Ethan and Braedyn, whom he and his wife Stacie are raising in the Austin community on the West Side of Chicago.

Johnson also credits his large family with teaching him how to negotiate, collaborate and refuse to accept “no” for an answer.

“In my house, ‘no’ was just something we heard before we asked again,” he said. “That’s a lesson I’ve relied on throughout my life, as an educator, an organizer and as a county commissioner. When you’re fighting for what our students and communities need, you never take ‘no’ for an answer.”

A native of Elgin, Illinois, and a graduate of Aurora University (BS in Human Services, Youth Development Programming and Management, 2004, and MA in Teaching, 2007), Johnson worked as chief of staff for Illinois State Representative Deborah L. Graham and as a constituent service director for Illinois State Senator Don Harmon before transitioning to education in 2007.

“I became a teacher because I believe that every child should have a chance to grow up and follow their dreams,” he said.

He began his teaching career in the social studies department at Jenner Academy in Cabrini-Green on Chicago’s Near North Side. There, he witnessed firsthand the impact of disinvestment and displacement. He saw how his bright, energetic students — so full of promise — were struggling to survive under the weight of poverty, high levels of unemployment and violence.

Johnson remembered one particular day at Jenner that left an indelible mark on him. He and his students were having a bad day and he was struggling to keep his cool when one of his students raised her hand.

“Mr. Johnson, you know what the problem is?” he recalled her saying. “The problem is, you should be teaching at a good school.”

Johnson said that comment deeply disturbed him, but he understood where it came from. His students could look out their front windows and see cranes and bulldozers destroying their community — paving the way for one of the wealthiest neighborhoods in the city, a neighborhood they would soon be excluded from.

As he continued his teaching career at Westinghouse College Prep, Johnson became directly involved in the fights for justice that most affected his students and his community.

“I realized that my students needed my experience and my help inside and outside the classroom so I became an organizer and joined the fights for justice that most impacted my students and their communities,” he said.

Under the leadership of then CTU President Karen GJ Lewis — whose spirit still guides Johnson today — he became a CTU organizer and began working directly with other educators, parents, faith leaders, community organizations and elected officials to deliver on the Union’s vision of the schools Chicago students deserve.

In 2015, he joined the Dyett hunger strike, which succeeded in reopening Dyett High School as an open enrollment school for the Bronzeville neighborhood. In coalition with parents and community organizers, Johnson helped win the historic fight for an elected representative school board for Chicago.

Then, in 2018, he won a seat on the Cook County Board, where he tackled groundbreaking, transformative legislation. He was lead sponsor of the Just Housing Ordinance, which prohibits housing discrimination against individuals with arrest records. And, he worked to eliminate the gang database and secure legal representation for immigrant refugees facing deportation.

In the wake of George Flyoyd’s murder, he organized the county board to commit to the historic Budget for Black Lives, which called for new investments in human services, public transportation and affordable housing. And when the pandemic hit, exposing old patterns of discrimination and inequity, Johnson initiated a statewide “Save Our Seniors” response to protect residents in long-term nursing care facilities.

As a father, educator, organizer and public servant, Johnson understands firsthand how deeply investments like these are needed. He and his family love their Austin neighborhood but recognize its challenges.

This is what gives Johnson hope — and the motivation to lead and work toward a Chicago where all communities are safe and vibrant places for families to live, work and raise their children.

“My mother taught me that your words are not as loud as your actions. That’s why I became a public school teacher, a union organizer, and a county commissioner,” he said. “I’ve been speaking for and on behalf of working families for a long time and those are the voices I will take with me to city hall.”