City planners Thursday endorsed a developer’s long-term proposal to build more than 2,200 residential units and a boutique hotel, potentially adding considerable density to a section of West Town near the future casino site.

The proposal envisions four high-rises, the tallest being 620 feet, or roughly 60 stories. Developer Jeffrey Shapack said he would start the multiphase project by converting a Salvation Army building at 509 N. Union Ave. into a hotel with 141 rooms.

Members of the Chicago Plan Commission enthusiastically backed zoning changes to allow the project to proceed, although timing will depend on the housing market. The panel approved overall site plans but not specific architectural designs, which are subject to future city reviews.

Shapack said the architecture has yet to be completed and can be revised based on development of the planned Bally’s casino site just east of its properties. Bally’s would take over the Chicago Tribune printing plant at 777 W. Chicago, a site that extends to Grand.

The commission advises the City Council on large-scale developments. Its approval of Shapack’s plan sends the matter to the council for final consideration.

Members praised the site plans, revised after feedback from residents and city officials, for including public plazas and ample space for pedestrians. Maurice Cox, commissioner of the city’s Department of Planning and Development, praised the development team for using “urban acupuncture” to enliven an area with much development nearby, including Fulton Market.

“It’s great to see the [street] grid being respected, the transit grid being taken advantage of,” Cox said. The development is next to a CTA Blue Line stop at Grand and Milwaukee.

Preserving the Salvation Army building gives a nod to the neighborhood’s history with manufacturing, Cox and others said. Jacob Wahler, principal with Eckenhoff Saunders Architects, who is working with Shapack, said the building dates from 1891 and was originally a margarine factory. Shapack said the building’s water tower will be kept as a historical feature.

After converting the building to a hotel, Shapack plans a residential tower just east of it at 500 N. Desplaines. Planning documents show the building would be 620 feet tall, a bit shorter than Chicago’s Lake Point Tower. Later phases on parcels south of Grand would get buildings of 487, 326 and 270 feet.

His sites are within the 27th Ward of Ald. Walter Burnett Jr., who praised Shapack for a “holistic approach” to community development. He said he expected criticism of the plans at a meeting of a River West community group, but everyone supported them.

Shapack has agreed that 20% of the housing units will be affordable under a city ordinance. The affordable units would be built within the project and not at another location, an option many developers use.

City officials said the development will generate about $12 million for the Neighborhood Opportunity Fund, which taps revenue from downtown-area growth to support improvements for neighborhood commercial streets.

Records show Shapack is a partner in the venture with Alec Litowitz, founder of Magnetar Capital, and his wife, Jennifer. Shapack has been among the busiest developers in Fulton Market, reporting 2.5 million square feet of projects planned or completed in Fulton Market, including The Hoxton and Soho House hotels.

A rendering of a residential tower planned at 301 S. Green St.

In other decisions, the plan commission approved and forwarded to the City Council:

• A 36-story, $166 million residential high-rise at 301 S. Green St. The 362-unit building is a venture of developers Lee Golub and Larry Debb and would replace a surface parking lot and low-rise commercial buildings. 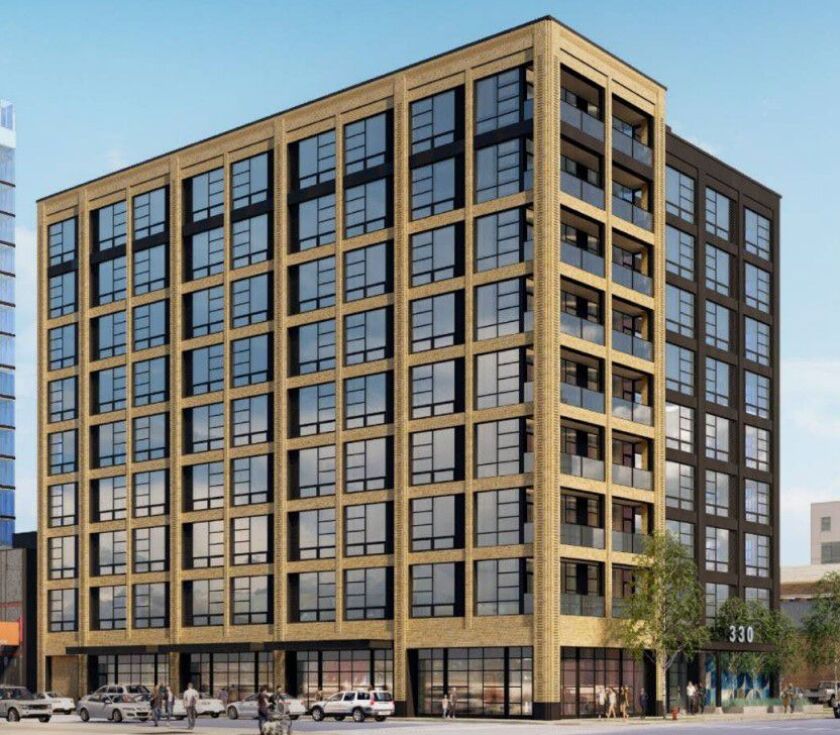 A rendering of a building Draper & Kramer has proposed at 330 W. Chestnut St.

KHN’s ‘What the Health?’: Biden Hits the Road to Sell Democrats’ Record

Twitter Questions Sean Payton-Bronco’s Marriage Before It Even Begins –…