Warlock in ‘Top Gun: Maverick’: Charles Parnell from Chicago rises through the acting ranks to a big-time role

When business was slow at Guadalaharry’s, a Mexican restaurant on Rush Street, Charles Parnell and a co-worker would make up skits in the kitchen.

They’d write character names on a nearby blackboard, Parnell said. They’d decide on a backstory and sometimes an accent. And then, they’d start acting.

“What’s the matter?” Parnell asked. They’d been waltzing around the kitchen, he recalled, in character.

“You’re pretty good at this,” she told him. She encouraged him to give acting a shot.

“All she had to do was say that, and then I just kind of took off,” said Parnell, now appearing in the summer blockbuster “Top Gun: Maverick.”

It was there that his teachers started to make him feel like he had something to offer as an actor, Parnell said, and after about a year, he started doing small stage productions in Chicago.

Parnell hadn’t intended to leave Chicago, he said. He was born and grew up in Hyde Park. After many years, Parnell still calls it “the best neighborhood in the world.”

The schools he grew up attending—Ancona Montessori, Shoesmith, Louis Wirth Middle School, and then Kenwood Academy—were within blocks of one another, Parnell said. Still, many of his close friends are from those years.

In 1994 he headed to New York, and he has since moved to Los Angeles. When people ask him where he lives, “LA, but I’m from Chicago,” Parnell always says. “I never let that go.”

Charles Parnell, who grew up in Hyde Park, now tells people he lives in Los Angeles, “but I’m from Chicago.”

The first television role he landed was a small part as a jail guard on the soap opera “One Life to Live.” He was on screen for about 15 seconds total, Parnell said.

But after it aired, a friend from eighth grade called him on the phone, excited to tell Parnell he’d saw him on TV.

“I’m like, what are you doing sitting around watching soap operas in the middle of the day?” Parnell said. But that kind of support is what kept him going, he said. Parnell saw how proud his friends were, even when he hadn’t “quote-unquote made it, yet,” he said.

He soon booked bigger and bigger gigs. He’s played Master Chief Petty Officer Jeter in “The Last Ship” and appeared on CBS’ “NCIS.” He acted in “Transformers: Age of Extinction.”

In 2011, he appeared in a main role as a father in an independent film called “Pariah.”

His Chicago friends organized a screening at AMC River East. They originally arranged to reserve 150 seats, but that number rose to around 250 as more people wanted to come.

“That’s what it means to come from Chicago,” he said, “to have your friends come and not care how much you’re in a movie, they’re coming because you’re on the screen.”

Parnell plays Warlock, a rear admiral, alongside Tom Cruise and Miles Teller. The first time he appeared on screen, his family and friends, sitting together in one section of the theater, exploded in cheers.

Years after he first saw Cruise onscreen in the original “Top Gun” (1986), Parnell got a chance to submit an audition for the sequel.

Afterwards, he received an email: “Tom Cruise liked your tape.” He started to get more hopeful about the role, and when he got the call after two more auditions, he said he started shouting, “I’m in ‘Top Gun’! I’m in Top Gun!” 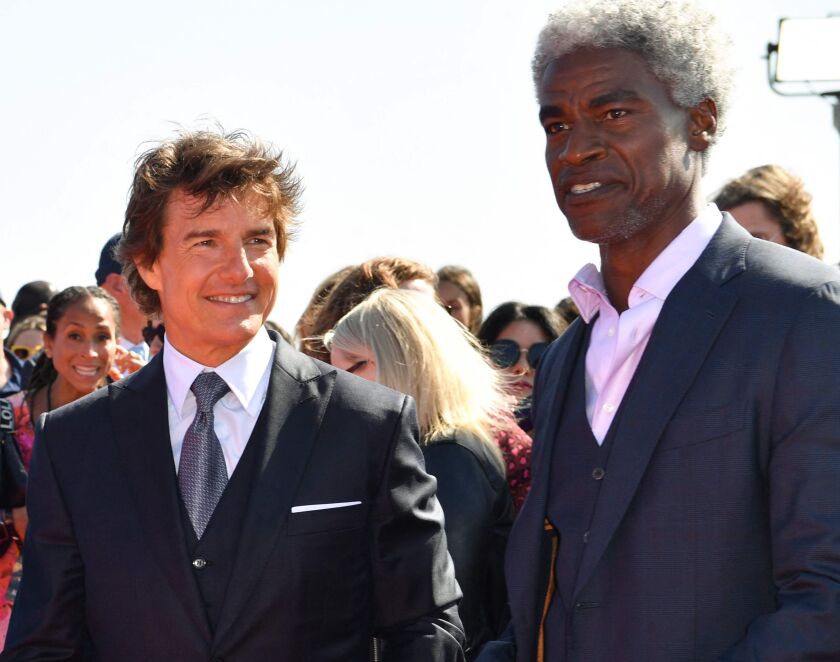 Tom Cruise poses with Charles Parnell at the world premiere of “Top Gun: Maverick” aboard the USS Midway in San Diego, California, on May 4.

Before shooting, he prepared for his role by spending time shadowing admirals, getting a sense of their daily responsibilities. He said it’s a mix of “things that would put you to sleep” and then “the next thing you know it’s some kind of super important decision you to have to make that you have to step out of the room for.”

It paid off. After one brief but difficult scene, Parnell said, Cruise came up to him to shake his hand, and tell him, “It’s all there, Charles, it’s all there, don’t worry about it.”

Even with his acting schedule, Parnell returns to Chicago often. He usually plans to come back in the summer, and spent the entire month of July in Chicago last year.

When he’s back, Parnell said he always has to go to the Original Pancake House on 47th Street. He has to have some Harold’s Chicken. He has to go to Portillo’s. And he often likes to play golf with his friends.

“After I’m done with press today,” he said, “I’m going to go to Jackson Park Golf Course, the fellows will be waiting for me.”

The Chicago Skyway was for years a financial albatross