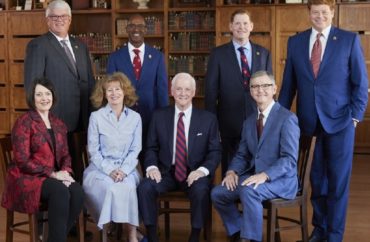 A statement in support of free speech is now official policy for the University of Oklahoma after a vote by the board of regents at the latest meeting.

The UO Board of Regents voted to adopt the “Chicago Statement,” which gets its name from a free speech and open debate resolution that originated out of the University of Chicago.

“The Chicago Statement coincides with OU’s existing policies on free expression and academic freedom,” the university wrote in a statement after the vote. The College Fix contacted all of the board members (pictured) twice in the past week for comment but none responded.

The move is good news for the campus, according to a free speech advocacy group.

“Its endorsement by university leadership, the faculty, and the Board of Regents demonstrates the university’s robust commitment to fostering freedom of speech on campus” Mary Griffin with the Foundation for Individual Rights and Expression told The Fix.

However, there is more work to be done on this topic, the senior program officer told The Fix.

“[O]f the thousands of four-year, degree-granting institutions, less than one hundred have chosen to actively endorse freedom of expression by adopting a version of the Chicago Statement,” Griffin said.

Joining UO is the University of Texas system, which similarly affirmed free speech last month when it passed a resolution in support of the Chicago Statement, according to the Texas Tribune.

A member of the Academic Freedom Alliance and a professor at the University of Chicago shared similar sentiments when it came to the resolution.

Professor Anthony Fowler told The Fix that more universities adopting the Chicago Statement is positive, but that “this doesn’t mean we no longer need to worry about freedom of expression and inquiry on college campuses.”

“Most universities have at least some influential and outspoken administrators, students, and faculty who are elitist, paternalistic, censorious, illiberal, anti-scientific, and/or overly confident in their own righteousness,” the public policy professor said.

“They might even say they support freedom of expression, but they will only support expression with which they agree,” he said.

But he also wants to see his academic peers stick up for each other.

“I do not understand why many academics have supported or stayed silent as our faculties have become intellectual echo chambers,” Turley wrote. “However, it is depriving our students of the type of diverse and vibrant intellectual environment that many of us enjoyed as undergraduates.”

“Chicago has forced schools and faculty to take sides in this existential fight over free speech,” Turley, a UChicago alumnus wrote. “While faculty members rationalize reasons not to support the statement, there is increasingly a sharp and clear divide among schools.”

He called the Chicago Statement a “battle line” for free speech and “the future of higher education.”

IMAGE: OU Board of Regents/University of Oklahoma