Rep. Sheila Jackson-Lee, D-Texas, addresses members of the press after the oral argument of the Merrill v. Milligan case at the US Supreme Court on Oct. 4. (Alex Wong/Getty Images)

Supporters of a House bill that would create a commission to study and develop reparations for African Americans are working to push the legislation forward, three decades after it was introduced.

US Rep. Sheila Jackson Lee, D-Texas, who is co-sponsoring the bill, has called on President Biden to sign an executive order setting up the commission for House Resolution 40. The bill was first proposed by the late John Conyers, who introduced the legislation in 1989 and spent years advocating for it.

In a two-day conference last week in Evanston, Ill., congressional leaders, experts and organizations met to discuss how to advance HR 40. Last year, the city north of Chicago became the first in the nation to begin implementing reparations for its Black residents.

“HR 40, is 38 years on the books waiting for someone to say yes,” Lee said at the conference. “Today, we ask with no apologies for an executive order to be in place.

“I want for once an acceptance of the history of the journey that African Americans have taken to be an accepted reality in America,” she added.

According to a 2021 Pew Research Center study, 68% of Americans believe that African Americans should not receive reparations. 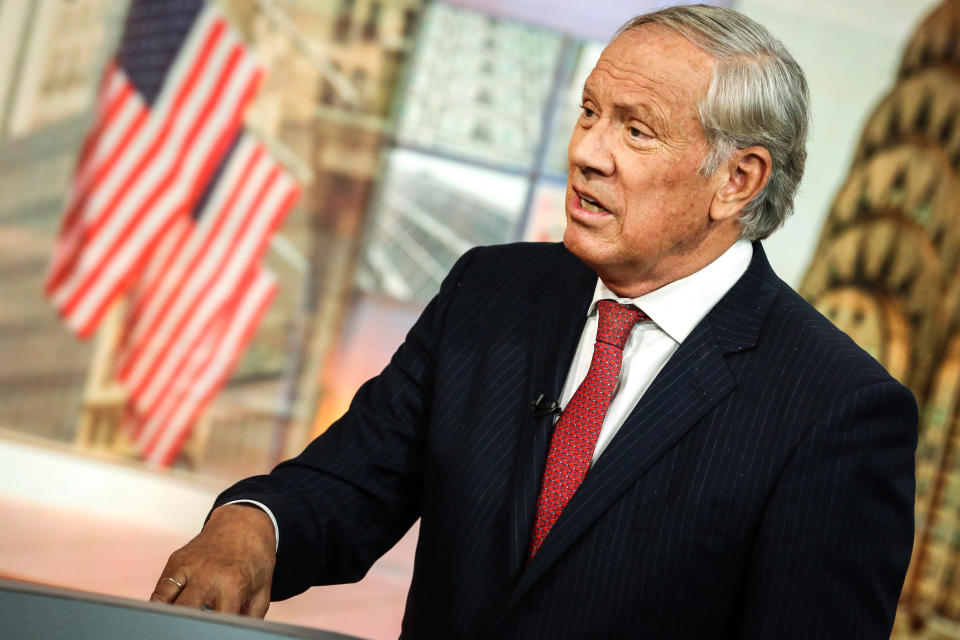 “I don’t think it’s right to write checks on the basis of race. It’s probably illegal,” former Republican New York Gov. George Pataki told the New York Post. Some New York lawmakers are working on a bill similar to the House measure that would create a reparations commission.

Thomas Craemer, an associate professor at the University of Connecticut, told Yahoo News that opposition to reparations is not abnormal. “Some opponents of slavery say that abolition with a great cost of blood and treasure was enough reparation, but I would argue that ending an injustice is not the same thing as making up for its enduring effects”

Support for the bill has grown since it first originated decades ago. “There are now 196 members of the House of Representatives that are co-sponsors of legislation, and I was proud to be one of the original co-sponsors,” Rep. Jan Schakowsky, D-Ill., told Yahoo News.

Schakowsky’s district includes Evanston, which allows Black residents to apply for grants from the city’s reparations fund. “The implementation was really the difficult part, not that there was public resistance to the idea in the city of Evanston, which has had a long history of having African Americans as part of the founding of the city, hundreds of years ago,” Schakowsky told Yahoo News. 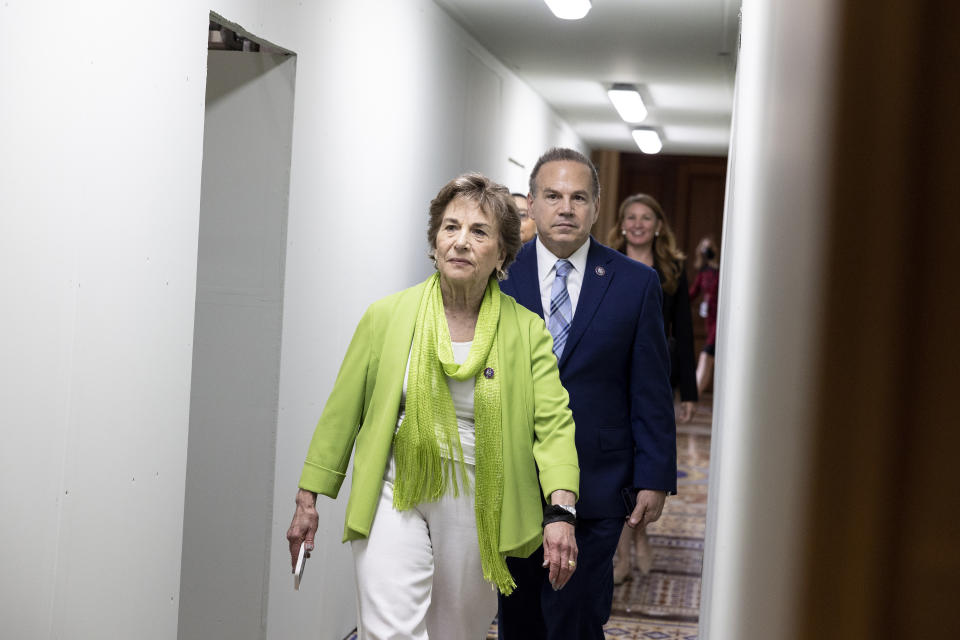 Rep. Jan Schakowsky, D-Ill., and Rep. David Cicilline, DR.I., at the US Capitol in Washington, DC on May 11. (Anna Moneymaker/Getty Images)

Experts say reparation initiatives are surging across the country, as cities like Asheville, NC, Providence, RI, and St. Louis have introduced reparation programs. At the state level, California’s Democratic Gov. Gavin Newsom signed legislation that created a reparations task force in 2020. The panel plans to release a final recommendation next year.

But others argue that local and state level reparations aren’t enough, and that the debt should fall completely on the federal government. “The states and localities don’t have the capacity to meet the type of scope and magnitude of a reparations plan that would eliminate the racial wealth differential in the United States,” William Darity, the author of From Here to Equality: Reparations for Black Americans in the Twenty-First Century, told Yahoo News.

Darity says the amount owed should be enough to eliminate the racial wealth gap in the United States. “That gap amounts to approximately $840,000 per household, per Black and white household. That’s the differential. If we were to try to convert that into an individual measure, it would be about $350,000 for Black or Black and white individual,” Darity told Yahoo News.

Darity says that’s not the only reason the federal government should foot the bill. “The federal government is the ultimate culpable party,” he said. “So if we think about this array of atrocities, beginning with the enslavement of the ancestors of today’s progeny of the freedmen, it was something that was deeply immoral, but fully legal, under US statutes.” 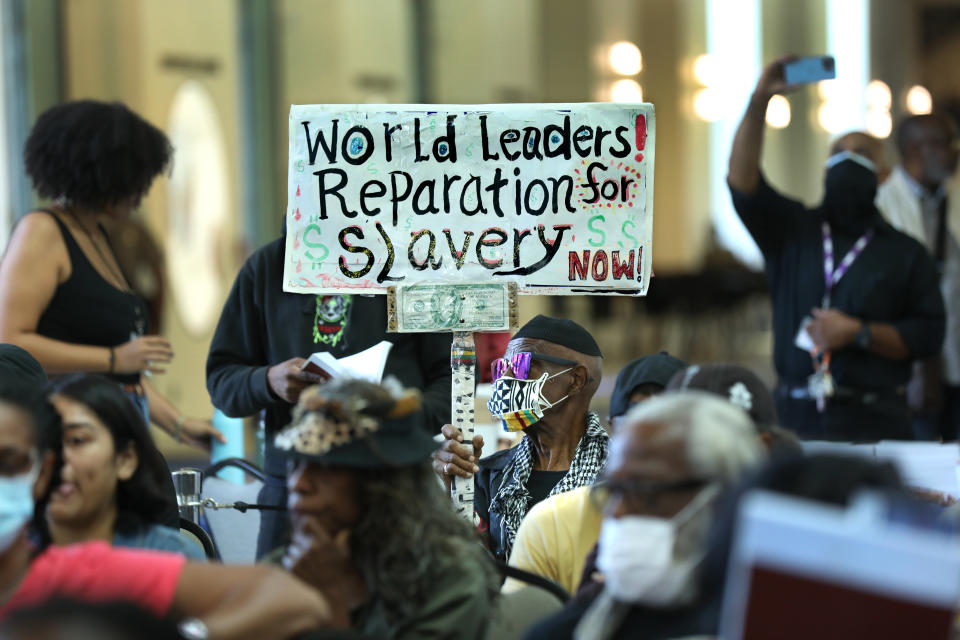 A longtime Los Angeles resident, Walter Foster, 80, holds up a sign as the Reparations Task Force meets to hear public input on reparations at the California Science Center in Los Angeles on Sept. 22. (Carolyn Cole/Los Angeles Times via Getty Images )

Ron Daniels, the president of the National African American Reparations Commission, at an assembly of reparations supporters, told Yahoo news that reparations means much more than providing money. It’s also about community benefits that will help repair and rebuild the country, he said.

Still, experts say that deciding who will receive the reparations will be complicated, because not every African American may be entitled to them.

“There are plenty of African Americans who are not the descendants of slaves, but who have been harmed in other ways, by redlining, or by systematic de facto discrimination in the kind of private sphere,” Raff Donelson, associate professor of law at the Illinois Institute of Technology Chicago-Kent College of Law, told Yahoo News. 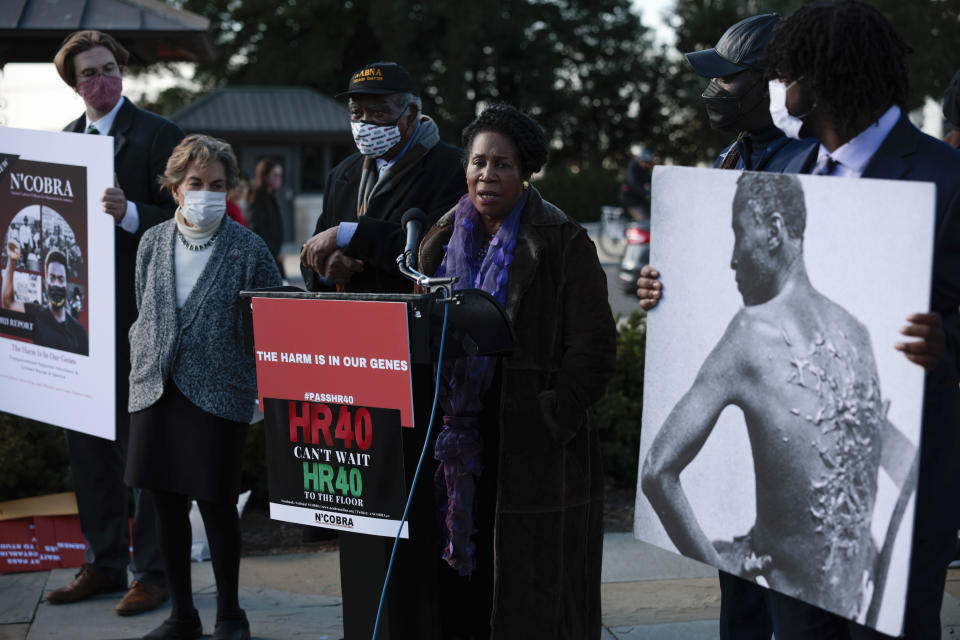 Since the structure of federal reparations is unclear, Schakowsky says that setting up the HR 40 commission is essential. “Figuring out how to actually implement it in real life, for real people,” she said. “Those questions will come up nationally, of who is qualified to actually apply for reparations. Those are the things that we’ll have to take some time to discover and to agree on.”

While slavery ended in 1865, African Americans have never been compensated for their labor, but supporters of HR 40 are hoping that will change. “We’ve faced many things where people say it’s absolutely impossible. And you keep fighting, you keep organizing, you keep adding to your numbers of supporters, and suddenly it’s inevitable.” Schakowsky said.