History buffs will recognize that year as 1969.

But this November, that 53-year string of political futility could end if Republicans win two open Supreme Court seats that cover big swathes of suburban Chicago.

Democrats hold the advantage in these elections because last year they redrew the court’s boundaries for the first time in 58 years with an eye to retaining control of the state’s highest court for at least another decade.

The loss of the 4-3 Democratic majority could imperil abortion, gun control and union rights and throw a wrench into a potential second term for Gov. JB Pritzker should he defeat Republican Darren Bailey this fall.

For Bailey, a friendly Supreme Court could be an important backstop against a Democratic-led General Assembly should the Republican beat Pritzker.

The importance is not lost on the first-term governor.

“It would be terrible if the Republicans who want to take away people’s rights win those Supreme Court seats,” Pritzker said. “That would take away, I think, many of the notes of progress that we’ve made over many years: standing up for workers’ rights, standing up for women’s rights, making sure that we’re keeping people safe.”

In a fund-raising pitch earlier this month, the state GOP went so far as to say the court elections are “MORE important to fixing our state” than even elections for governor or Congress.

The race for the 3rd District pits Supreme Court Justice Michael J. Burke, a Republican, against Appellate Justice Mary Kay O’Brien, a Democrat. That district comprises DuPage and Will counties, along with Bureau, Grundy, Iroquois, Kankakee and LaSalle counties.

Curran, who has never been a judge, is a former three-term Lake County sheriff who ran successfully in 2006 as a Democrat but switched parties in 2008. As sheriff, Curran spent a week in the Lake County jail to see what prisoners experience.

In 2020, Curran opposed Democratic US Sen. Dick Durbin but lost by 16 percentage points statewide and by the same margin in his home county.

“I’ve not been a partisan individual,” Curran said. “I’m somebody that I think that could easily work with the other justices on the Supreme Court and bring a much needed perspective of these five counties that I’m running in so that it’s not lost in what’s best for Chicago and Cook County. ”

Curran describes Rochford as a “partisan Democrat tied to the Chicago machine.”

On abortion, Curran WBEZ he is “pro-life” but insisted told “I’ve never called myself anti-abortion.”

But last December, Curran attended a downtown anti-abortion rally during arguments in the Dobbs v. Mississippi case. Even though the US Supreme Court hadn’t yet overturned Roe v. Wade, Curran posted on Facebook: “For those that believe in the protection of the child in the womb than (sic) you should thank Donald J. Trump.”

Asked who won the 2020 presidency, Curran told WBEZ, “It’s kind of irrelevant, but Joe Biden won the election.” But in a Jan. 3, 2021, Facebook post, Curran circulated now-debunked claims about vote fraud in the presidential elections.

On guns, Curran said he would not discuss how he might rule on any Second Amendment cases if elected. But on Instagram, during his US Senate bid, Curran posted a photo of youth holding military-style rifles with the caption, “I protected your Second Amendment rights as Sheriff and I will do the same as your senator.”

The Illinois State Bar Association attached a “not recommended” label to Curran’s court candidacy. Barely a quarter of lawyers surveyed by the group said he met the requirements to be a justice, with only 53% vouching for his integrity.

“They didn’t recommend me. Oh well,” Curran said of the group’s assessment. “I mean, I think most people are concerned about somebody that’s too close to the lawyers sitting on the highest court.”

Rochford was rated “highly recommended” by the group, and she sees that as an important difference.

“Mark Curran was found not qualified and not recommended, and he has never been a judge. And Mark has publicly stated that he had no ambition for the job, that he only ran because he believed that the Lord wanted him to,” she said. “In contrast, this has been my life’s work.”

Rochford has been a Lake County judge since 2012. Before that, she was in private practice after a stint in the Cook County state’s attorney’s office and served 22 years as an Illinois Court of Claims commissioner, adjudicating legal claims against the state.

Rochford readily acknowledged Biden as the 2022 presidential winner but divulged little about her stance on abortion.

“I certainly have known people that have had abortions under a variety of circumstances. And I believe it’s a very personal decision. I’m not sitting in judgment of a woman’s rights of her own autonomy and body,” she said.

The 2nd Supreme Court District favors Democrats. In 2020 and 2018, respectively, Biden and Pritzker carried four of five counties, with the main vote centers of Lake and Kane going Democratic both times.

The 3rd District match up

Arguably, the Burke-O’Brien pairing is slightly more favorable to Republicans.

Trump and former Republican Gov. Bruce Rauner won five of the district’s seven counties in 2020 and 2018. But DuPage and Will swing Democratic both times, and they have the most votes.

Burke was appointed to the Supreme Court in 2020, following 12 years as an Illinois appellate justice and, prior to that, 16 years as a DuPage County judge. Before that, he was a county prosecutor.

Burke, who acknowledges Biden won the presidency, said he believes his experience in the judiciary distinguishes him from O’Brien, an appellate justice herself and a former Democratic lawmaker in the House.

Ahead of the primary, the Illinois State Bar Association rated Burke as “highly recommended” and O’Brien as “recommended.”

When asked about abortion, Burke is guarded.

The group also unearthed a 2014 citation on Burke’s past online campaign website that he was a member of DuPage County St. Thomas More Society of Catholic Lawyers. The national Thomas More Society is now suing to invalidate Illinois’ 2019 abortion-rights law and declined an interview request for this story.

The Burke campaign said the two organizations are different, and the one the justice once belonged to is not the one suing in Sangamon County.

Before the primary, the anti-abortion group, Illinois Right to Life Action, rated Burke and Curran as qualified for the Supreme Court.

On guns, Burke sidestepped questions on tighter gun laws but noted the impact of knowing someone at the Highland Park mass shooting and having an earlier mass shooting at the Oak Brook Center Mall strike close to home.

“It’s horrific for people to live through. And those of us who are close to those people and living in close proximity feel that vicariously,” Burke said. “We are all affected by that.” 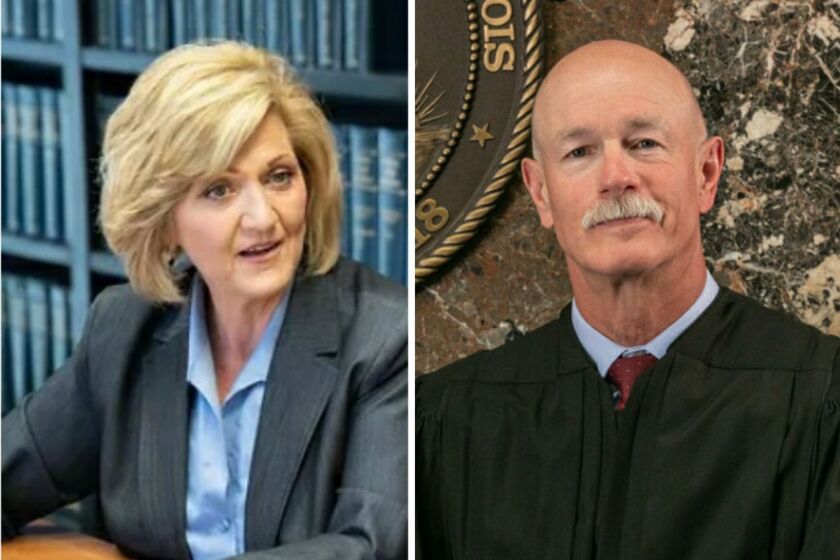 Burke’s opponent, O’Brien, has been an appellate justice for 18 years, having heard more than 4,500 cases, according to her campaign website. Before that, she was a member of the Illinois House from 1997 to 2003.

She characterized one of her signature legislative accomplishments as helping to extend the criminal statute of limitations for those sexually abused as minors.

The 2000 law she co-sponsored scrapped the old standard that held an abuse victim had one year after turning 18 to pursue charges, extending it to 10 years, a deadline that was later eliminated entirely.

“It was something that I only found out about because I was listening to someone who felt the system had failed them,” she said.

“To be lulled into a feeling of security because we have, right now, statutes in place that protect those rights would be pretty dangerous complacency,” she said.

Personal PAC has endorsed both O’Brien and Rochford.

The 5 best barbecue joints in the Chicago suburbs