CHICAGO (WLS) — Chicago should brace for a snowier winter than normal this year, according to the US Winter Outlook released by the National Oceanic and Atmospheric Administration (NOAA) Thursday.

NOAA forecasters are calling for a classic La Nina pattern, and this year, it’s what they are calling a “Triple Dip” La Niña.

La Niña means there will be cooler than normal ocean temperatures in the eastern Pacific Ocean near the equator off the South American coasts. The cooler water effects weather patterns in the US, especially during the winter months of December, January and February.

A “triple dip” means that this is the 3rd year in a row that the US will experience La Niña conditions.

“It is exceptional to have three consecutive years with a La Niña event. Its cooling influence is temporarily slowing the rise in global temperatures – but it will not halt or reverse the long-term warming trend,” Petteri Taalas, the secretary-general of the World Meteorological Organization, said in a recent report. 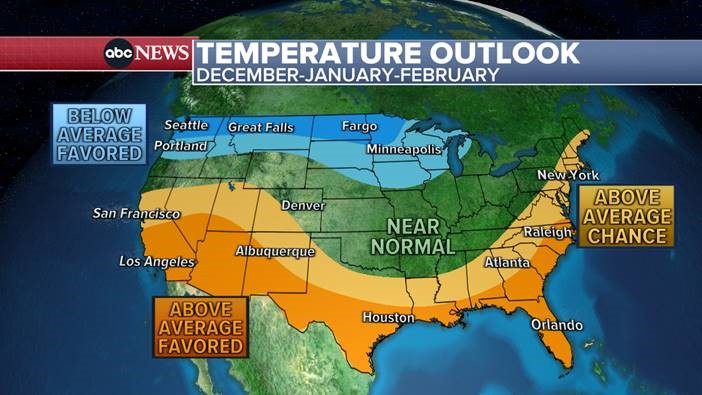 In each of those winters, the Upper Midwest and Great Lakes regions had colder than normal winters, according to NOAA.

This winter, NOAA forecasters are predicting temperatures will be near normal in the Chicago area. But Wisconsin, Iowa, Minnesota and parts of northern Michigan are expected to see below normal temperatures.

As for snow, NOAA said cities like Chicago, Milwaukee and Detroit could see a snowier than normal winter with above average precipitation predicted across the Great Lakes region.

Woman gets probation for confrontation with Black bicyclists