Cook County probation officers once made as many as 50,000 unannounced curfew checks a year in an effort to ensure that felons deemed high-risk who were sentenced to probation for their crimes were home at night, as they were supposed to be.

Sometimes during those visits, guns and drugs were confiscated, and the probationers were arrested.

But the units that did most of those curfew checks have been disbanded based on a recommendation from an arm of the Illinois Supreme Court.

It’s a major—but little known—change in the way probation in Cook County and the rest of the state is now handled.

And that has some who opposed dismantling those units saying probation officers have now lost a key tool to discourage convicted felons from keeping guns in their homes. That’s particularly a concern, they say, as the numbers of shootings and carjackings in Chicago have soared.

But supporters of the change say there’s no evidence the unannounced curfew checks ever prevented crimes.

Probation is a sentence imposed when a judge decides that someone convicted of a crime should be kept under court-ordered supervision and be given a chance for rehabilitation rather than being sent to prison.

The probation officers who served in the now-defunct intensive probation units were assigned to supervise probationers deemed to pose the greatest potential danger to the public. Every year, they made thousands of home curfew checks.

And the probationers were required to sign agreements allowing those officers to search their homes without a warrant.

A few years ago, the Administrative Office of the Illinois Courts—whose staff is appointed by the Supreme Court—began encouraging probation departments to discontinue intensive probation supervision. Instead, it urged them to turn to “evidence-based services focused on changing behaviors and achieving more positive outcomes,” according to Christopher Bonjean, a spokesman for the office. There was a good reason for doing so, he says.

“Probation departments began phasing out this program after it was found to not reduce the rate of recidivism, and there were other services that showed better results,” Bonjean says.

A spokeswoman for Chief Cook County Judge Timothy Evans, who overseas probation officers, wouldn’t respond to questions about the change — even to discuss exactly when intensive probation was phased out in Cook County.

In a 2019 deposition, though, the human resources director for Cook County’s adult probation department said that officers in those specialized units — including intensive probation supervision, intensive drug probation, sex offender probation and intensive gang probation —were being folded into a “unified field units.”

Some probation officers are critical of the move to do away with the intensive probation units.

“The old units were essential then and could be essential now,” says one Cook County probation officer who spoke on the condition of not being identified by name. “If it’s run correctly and if you get officers that are trained correctly and supported correctly, I think public safety just wins.”

“Now, you knock on the door, you don’t walk through the house, you just stand or sit wherever,” says the former supervisor, who also requested anonymity. “And you talk about what’s going on, usually try to talk to the family members and say, ‘How is Johnny doing?’ The public safety element was that you used to search for guns or drugs or something that was a potential threat to the community. But not anymore.”

John McCabe, a board member of the Illinois Probation and Court Services Association, disagrees. He says the old intensive probation model “is not evidence-based and is not ‘best practices.’

“It is a monitoring tool, it’s surveillance-emphasized, and it’s sort of authoritarian in nature,” McCabe says. “The results are not a change in behavior. The results are an increase in violations and actually recidivism. It doesn’t do anything to change their behavior, other than it’s a bunch of ‘gotchas.’ ”

He points to studies like one by the University of Pennsylvania that found that intensive supervision units weren’t effective in preventing new arrests.

A better way to supervise high-risk individuals is through specialized courts that deal with drug users, mentally ill people and military veterans who suffer from post-traumatic stress syndrome, McCabe says. Only in narrow circumstances do probation officers search homes these days, he says.

“Now, for instance, if we have a caseload where an individual is on a sex crime, and part of their restrictions put on them in their probation is that they do not have access to a computer, then the probation officer has a right to examine the household for a computer,” he says. “But it’s not like we have access to everything in the house. It’s clearly tailored to the crime involved. But this indiscriminate just knock-knock and show up and search the house—a person on probation can’t control everything in the house.”

The elimination of Cook County’s adult intensive probation units followed accusations of wrongdoing against Philippe Loizon, who was a deputy chief in the probation department.

The Chicago Tribune published a story May 21, 2014, headlined “Warrantless searches draw criticism,” in which some probationers accused Loizon of misconduct. In one case, Loizon and other probation officers had checked whether a man on probation was complying with his curfew. The officers said they smelled marijuana smoke after knocking on the door and entering the home. The man they were looking for wasn’t there.

The probation officers found marijuana on an upstairs nightstand and called Chicago police officers, who found a gun upstairs and arrested a man who wasn’t on probation. That man told the Tribune the search was a “home invasion,” saying the officers didn’t have a warrant to search his separate apartment. The charges against him were dismissed after a Cook County judge tossed out the evidence of the gun.

Loizon says the search and others were legal. In an interview, he says the probationer and the man arrested on the gun charge were both living in a single-family house —not separate apartments —and that the probation officers in his unit were expected to search all of the rooms of a single- family home during a curfew check as a safety precaution.

Loizon and his attorney Greg Friedman note that the probationer had signed a court agreement allowing probation officers to search his home and that a 2011 Illinois Supreme Court ruling upheld that practice. 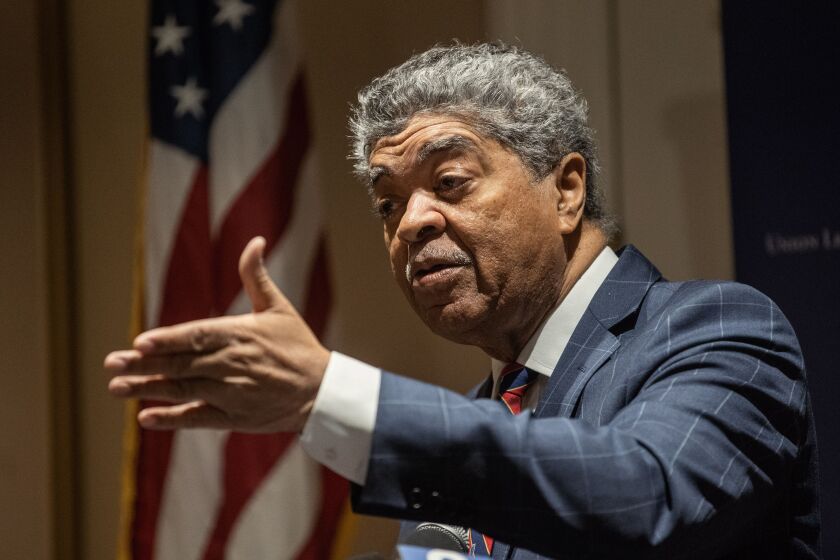 A spokeswoman for Chief Cook County Judge Timothy Evans, who overseas probation officers, wouldn’t respond to questions about the change — even to say exactly when intensive probation was phased out in Cook County.

The day the Tribune story ran, Evans placed Loizon on desk duty and put out a statement saying he was “outraged by these allegations, which, if true, could be considered a blatant disregard of constitutional rights.” Evans also announced that he’d hired a law firm to investigate the accusations.

He says Evans made him a scapegoat as a result of that story and others.

In 2018, Loizon sued Evans and Cook County’s Office of the Chief Judge in federal court for wrongful termination. On March 28, Loizon’s lawsuit was dismissed. US District Judge John Lee said Loizon, who is white, didn’t prove that he received unfair treatment compared with Black colleagues and also ruled that he had waited too long to file his lawsuit against Evans and his office.

But the judge said Loizon “met his burden” when he argued against some of the reasons Evans’ office gave for his firing that were listed in a 2017 termination letter from Loizon’s supervisor.

The letter said, in part, that Loizon diverged from the probation department’s mission, which allowed probation officers to contact law enforcement officials only to report crimes or request protection.

Loizon points to a 2013 FBI ceremony at which Evans and the probation department were honored for sharing intelligence with the FBI — leading to arrests and gun seizures. After that ceremony, which Evans attended, the chief judge praised Loizon in a letter “for bringing distinction to our department.”

“The Bureau’s recognition of the critical and valuable contributions in helping to keep communities safe in Cook County is more than gratifying,” Evans then wrote.

In a 2019 deposition, though, Evans said he didn’t have any knowledge until the Tribune’s 2014 story of the FBI and the Chicago Police Department actively working with probation officers on anti-violence operations.

In the same deposition, Evans also said “I don’t recall” when asked whether he was aware of a case called People v. Samuel Absher in which the Illinois Supreme Court ruled in 2011 that probation officers can perform warrantless searches of probators’ homes if the probator has signed an agreement allowing it.

Loizon is appealing the dismissal of his lawsuit.

The chief judge’s office cited that pending litigation involving Loizon in declining to comment in response to questions the Chicago Sun-Times submitted on April 5. 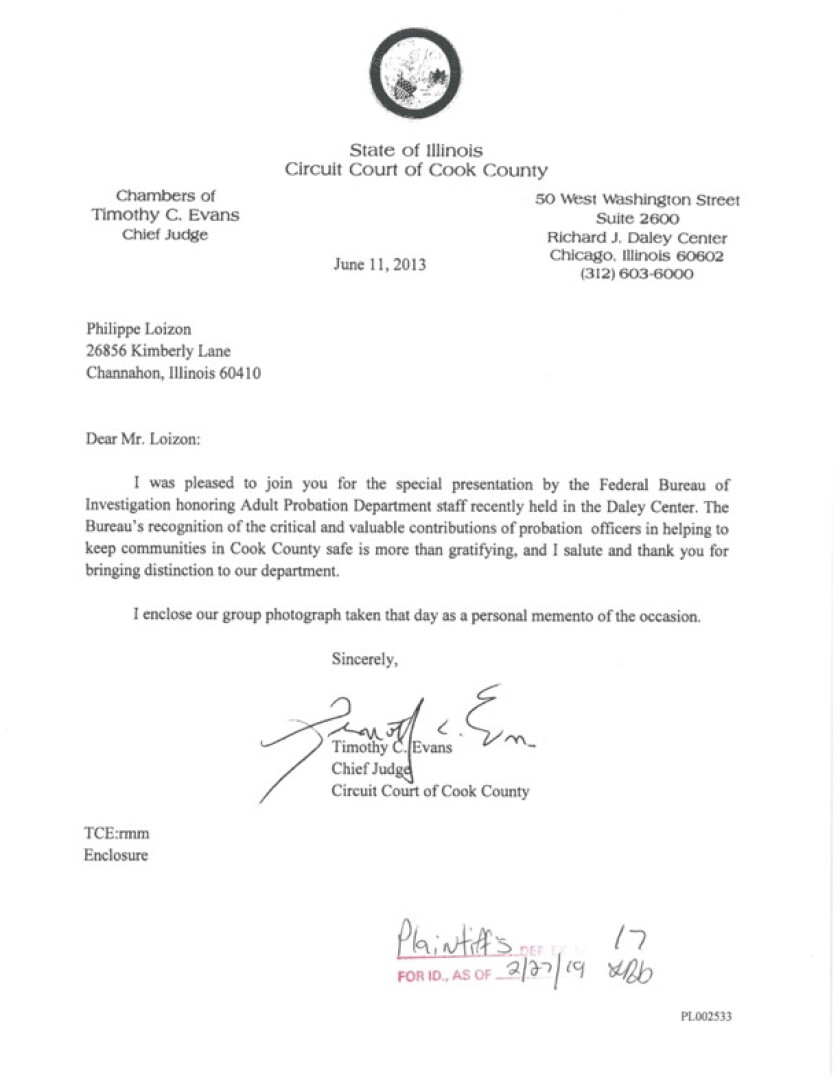 Star Wars, chocolate and other lures bringing visitors to…