Classical music in Chicago 2022: Our guide to the fall season highlights

Nicholas Phan, artistic director and co-founder of the Collaborative Arts Institute of Chicago, was doing research for a previous installation of the organization’s annual art-song festival and discovered the extensive breadth of compositions in the form by Chicago composers past and present.

So, he and his collaborators decided to make Chicago’s fertile music history the focus of the 2022 installation of the event, known as the Collaborative Works Festival. Performances of “The Song of Chicago” are set for Sept. 7 and 8 at Roosevelt University’s Ganz Hall, 430 S. Michigan, and Sept. 11 at the Epiphany Center for the Arts, 201 S. Ashland Ave.

“Chicago has a really rich history of producing a tone of composers and poets who have done extraordinary work,” Phan said.

Well-known classical composers from Franz Schubert and Johannes Brahms to Charles Ives and Ned Rorem have written art songs. But these intimate concert works, typically settings of poems with piano accompaniment, don’t have the same visibility or popularity as other vocal forms like opera.

“The mission of CAIC is to promote the art-song repertoire,” Phan said, “and the art of the vocal recital, and this Collaborative Works Festival aims to do that by picking a theme each year and exploring that theme through song.”

The Sept. 7 program, “Chicago’s Own,” features an overview of composers who were born or spent time in the city, including Rorem, Joseph Schwantner and Reena Esmail. Chicago’s rich history of Black composers will be showcased Sept. 8 with works by such composers as Florence Price and Nora Holt, who became the first African American to receive a master of music degree in 1918.

“I’m excited about all three programs, but I’m particularly excited about this program,” Phan said, “because it’s showing a story that has been overlooked, and it’s a really important story.”

The festival concludes Sept. 11 with a tribute to Carl Sandburg, who in addition to writing poetry also famously collected American folk songs in a 1927 anthology titled “The American Songbag.” This concert will feature arrangements of some of those songs by composers like Ernst Bacon, Ruth Crawford Seeger and George Walker, as well as settings of several of Sandburg’s poems.

In keeping with the festival’s theme, all the performers except Phan will be Chicago-based, including tenor Lunga Eric Hallam, mezzo-soprano Zoie Reams, baritone Robert Sims and pianist Yasuko Oura.

Here’s a look at 11 more classical music events worth checking out: “Ernani” at Lyric Opera of Chicago.

Sept 9-Oct 1, Verdi’s “Ernani,” Lyric Opera of Chicago, Enrique Mazzola, conductor, Lyric Opera House, 20 N. Upper Wacker (lyricopera.org). Based on a play by Victor Hugo, this dramatic opera centers on a messy love quadrangle, with one of three suitors for the same woman being the king. First presented on the Lyric stage in 1984, this work is the fourth installation in an early Verdi opera series spearheaded by the company’s music director, Enrique Mazzola.

Sept 18, Handel’s “Jeptha,” North Shore Center for the Performing Arts, 9501 Skokie Blvd., Skokie; and Sept. 19, Harris Theater for Music and Dance, 205 E. Randolph, Music of the Baroque, Jane Glover, conductor (baroque.org). Handel’s Christmas and Easter oratorio, “Messiah,” is widely beloved, but the great baroque master wrote more than 25 other oratorios, including his final one, “Jephtha,” based on a biblical story. These concerts are the Music of the Baroque’s first performances of this work in more than the three decades, and they inaugurate Glover’s 20th season with the group.

Sept. 22-24 and 27, Coleridge-Taylor’s “Solemn Prelude,” Chicago Symphony Orchestra, Orchestra Hall, 220 S. Michigan (cso.org). To launch its 2022-23 season, Riccardo Muti’s last as music director, the CSO will perform a program that includes the American premiere of “Solemn Prelude.” (The other works differ on the Sept. 24 line-up.) The manuscript for the long-lost work was discovered in the archives of the Three Choirs Festival in Great Britain, where it debuted in 1899 and was performed again last year. Coleridge-Taylor (1875-1912), who had an English mother and Sierra Leone Creole father, gained considerable respect in England during his short life, including early support from famed composer Edward Elgar. 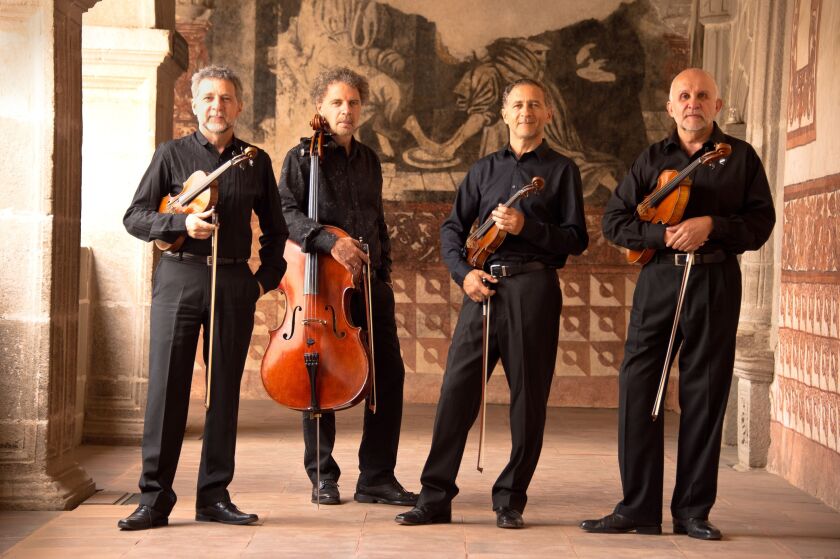 october 15, Cuarteto Latinoamericano, Music Institute of Chicago and International Latino Cultural Center of Chicago, Nichols Concert Hall, 1490 Chicago Ave., Evanston (musicinst.org/nch). Classical music might have originated in Europe, but that continent holds no monopoly on the genre. That’s the message of this 40-year-old ensemble from Mexico City, which commissions new works and champions famed Latin American composers like Héitor Villa-Lobos, Alberta Ginastera and Silvestre Revueltas, all of whom will be showcased on this program.

october 20, Yunchan Lim, pianist, Skyline Piano Artist Series, Galvin Recital Hall, Northwestern University, 70 Arts Circle Drive, Evanston (music.northwestern.edu). That conductor Marin Alsop was reportedly wiping away tears in June after leading Rachmaninoff’s Piano Concerto No. 3 at the Van Cliburn International Piano Competition with contestant Yunchan Lim, was a good indication that he would be the winner. And, indeed, the jury selected the 18-year-old as the youngest pianist ever to win the gold medal at the celebrated contest in Fort Worth, Texas.

october 26-28, “Music from Paris,” Quatuor Diotima, University of Chicago Presents, Performance Hall, Logan Center for the Arts, University of Chicago, 915 E. 60th (chicagopresents.uchicago.edu). Formed in 1996 by graduates of the Paris National Conservatory, this ensemble has become one of the most sought-after string quartets in Europe. This three-concert series was originally scheduled last season when the group was in residence at the University of Chicago, but the event had to be postponed because of “unforeseen difficulties related to international travel.”

Nov. 3, Golijov’s “Falling Out of Time: A Tone Poem in Voices,” Silkroad Ensemble, Harris Theater Presents, Harris Theater (harristheaterchicago.org). Based on a book by David Grossman about parents’ grief over the death of a child, this song cycle “portrays a musical, mythical walk that traverses vast and varied emotional landscapes,” according to Silkroad’s website. The work, which was premiered as part of an American tour in 2019, was the first in a decade for this celebrated composer who sank into a creative malaise.

Nov. 9-25, Verdi’s “Don Carlos,” Lyric Opera of Chicago, Lyric Opera House (lyricopera.org). Although Verdi wrote his original version of “Don Carlos” in French, most modern stagings feature an Italian translation known as “Don Carlo.” With this production, Lyric Opera will present for the first time the 1886 Modena version in five acts in French. A slightly different five-act French version was presented last year by New York’s Metropolitan Opera to considerable acclaim, and the Lyric is clearly hoping for a similar success with its production with the same director, David McVicar.

Nov. 18 and 20, Szymanowski’s “King Roger,” Chicago Opera Theater, Lira Ensemble and Apollo Chorus, Lidiya Yankovskaya, conductor, Harris Theater (chicagooperatheater.org). Written in 1918-24, Polish composer Karol Szymanowski’s “King Roger” was inspired in part by the mix of cultures and religions in around the Mediterranean basin. Performances of the work were relatively rare after its debut in 1926, but this opera has been rediscovered in recent decades and productions have become more frequent. This will premiere at its Chicago.